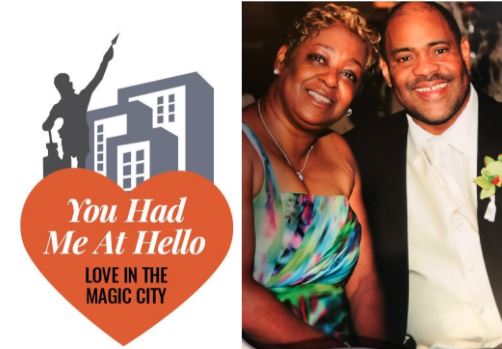 Met: 1981, Princeton Baptist Hospital. Tywanna and Morris both worked at Princeton. She worked in the emergency room, and Morris said he’d pass the ER often. “I’d see her in the emergency room through a window. So, I watched her for probably five months. [Morris thought] she sure is pretty, and I would like to take her out, and I saw her eating breakfast in the cafeteria most mornings so I figured that was my best chance,” he said. The next day, Morris told her: ‘I hope I’m not bothering you, but I see you ever day and you know, I don’t even know your name.’ We started talking, and that’s how we met.”

He also loved her eyes. “She had the prettiest eyes I had ever seen. They were big and light brown, and I think that had me hypnotized,” he said.

Tywanna said, “I would see him through the window, he’d always get on or off the elevator. One of my coworkers told me that he was a nice guy, because he’d always wave at us [through the window] and we’d wave back. I figured he was probably married, probably had about three children . . . Once we met in the cafeteria and we got a chance to talk, he was so pleasant and very polite. We exchanged telephone numbers.”

Morris proved his kindness to Tywanna that first time they met. “I was selling chocolate bars for my church’s youth department,” Tywanna said. At the time, she attended Petty’s Chapel AME Zion Church in Bessemer. “He bought the whole box.

First date: 1981. The couple ate dinner at Bonanza Steakhouse, now defunct, and danced to good music. They attended a Roy Ayers concert together, a jazz musician. “It was so romantic. The music was very smooth, and Morris was dressed nicely,” Tywanna said. “He opened doors for me… He was just so debonair. I was very impressed with him.”

Morris was equally impressed. “She was gorgeous. Her entire look was just exciting. I can’t remember what she wore at the time but she looked so good,” he said.

Tywanna said their dates always ended on a good note, too. “Any time he would come and take me to dinner, he would have me home early. My mom was really impressed, and she thought the world of him,” Tywanna said.

The turn: Morris said he loved Tywanna’s heart. “She was honest. She really cared about other people. Of course, she was beautiful to me, but what I saw inside of her was even more than that. She loved her family, and to me, she just seemed like the perfect person to spend the rest of my life with,” he said.

Tywanna said his kindness wasn’t the only thing that drew her to him. “He was kind of adventurous, he loved to do things. He kept you laughing all the time. He was very trustworthy and if he told you something, you could bank on it,” she said.

Family was important for both of them. “He came from a family of four while I was an only child. We always liked to see family come together, and [Morris’ family] would always include me and it made me feel good,” Tywanna said. “[Morris] was good to my mom, too. So I was just head over heels with him.”

The proposal: April of 1982. “I asked her to marry me at my apartment,” Morris said. “We actually hadn’t been dating that long, but I just knew she was the one for me. I asked her mother afterward, the both of us went to her house. While her mother was standing on the porch, I was telling her how I felt about Tywanna, and she said I had her blessing, but I had to pay her car note. I’d pay the car note, I’d pay anything to marry her,” he laughed.

Tywanna said she wasn’t shocked. “We met in 1981, and we were always serious about each other,” she said. “We always talked about when our parents got old, that we wanted to take care of them. My mother was divorced, and I was really close to my mom, so I’d always talk to her about Morris and she really liked him . . . I knew she’d give her approval. When he went to her, she didn’t have to wonder about a thing. He was always good to me.”

The wedding: May 15, 1982. “We had the wedding at one of her cousin’s house, it was a private wedding with immediate family. Her mother and father, and my mother father and my siblings,” Morris said. The colors were mauve, ivory and black.

Most memorable moment for the bride were the vows, and holding Morris’s hands. “They were clammy,” she laughed. “But the vows were the most beautiful moment of the wedding. They were typical vows, but they mean a lot to me,” she said.

Most memorable moment for the groom was when he forgot his tie. “I can’t remember, but I think I left it somewhere. I had to borrow mine from one of the groomsmen,” he said.

Words of wisdom: “Communication,” Tywanna said. “Always make time for one another, because the world that we live in today is so fast. It helps you trust each other. You also want to pray together,” she said. “It’s going to be hard, but even if you have children, you have to find time for each other because you’re still in a relationship.”

Morris said patience is important, too. “We come from two different backgrounds, so she was raised differently and I was raised differently,” he said. “When you first get married, you’re still trying to learn about each other. Just because she does it one way doesn’t mean it’s the wrong way. To me, marriage should be a partnership. We should learn from each other and learn to communicate and compromise. It’s a lot of sacrifice,” he said.

Happily ever after: Tywanna and Morris have three children: Morris III, Martrice and Mikel. They also have two grandchildren, Madisan and McKenzie.

Tywanna, 62, is from Bessemer, Alabama. She holds a bachelor’s degree in elementary education from Miles College and a master’s degree in early childhood education from the University of Alabama at Birmingham, and a retired school teacher from Jonesboro Elementary in Bessemer. She retired in 2019 after 30 years of service. She is national board certified in literacy.

Morris, 64, is from the College Hills area. He graduated with a degree in respiratory therapy from UAB. He recently retired in 2019 after 39 years in the field.

Now retired, the Packers said they really enjoyed travelling prior to COVID-19, but babysitting their grandchildren is one of their biggest hobbies. Morris likes to collect vintage cars, while Tywanna enjoys reading.