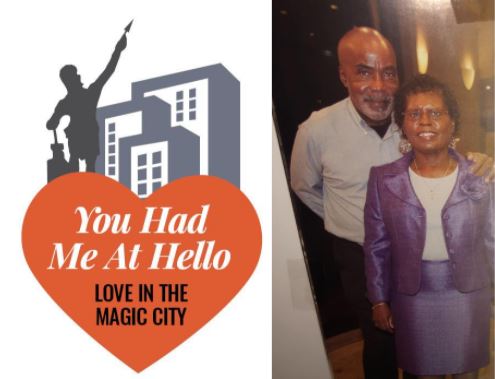 Met: Fall of 1999. George and Sarah attended A.H. Parker High School in Smithfield. “We were friends,” Sarah said. “George was the type of person who didn’t know a stranger. He was just a nice guy, so when we finished school, I would always see him downtown because he’d be there sometimes.” George and Sarah went their separate ways after they graduated in 1969 and thirty years later, the two met in a post office in Birmingham.

“He was going to the post office to mail a package, and saw me coming in to put something in the mailbox and called me over. We started talking on the phone, and one thing led to another,” Sarah said.

George remembered Sarah’s kindness. “Sarah was a nice lady, she’s been nice all of her life. Very good, sweet lady. That was the best move I made, and I don’t regret it,” he said.

First date: Very simple, George said. “We just hung out together. We just went out and we became closer.”

The turn: George said he was attracted to Sarah’s faith in God. “Sarah is a Christian lady, and that’s what drew me closer to her,” he said. “She’s a firm believer and I am a firm believer also, because I know what brought me back from Vietnam [in 1971]. I had been single for a long time, but she has a beautiful spirit, and that’s what drew my attention to Sarah, her spirit and her kindness. Plus she’s a beautiful lady, a fine Black woman.”

Sarah saw some of the same qualities in George. “He was a Christian, he was raised by good parents. His dad was a preacher, and I knew he was a good man. He was concerned about my happiness and that just drew me to him,” she said.

George knew what happened to Sarah when she was a child. Her sister Addie Mae Collins was one of the four girls who died in the Sixteenth Street Baptist Church bombing and Sarah was injured. We finished high school in 1969 and I knew what had happened to her. I never would have in my wildest dreams think I’d be married to Sarah Collins. But He made it happen, and I’m not gonna question why it did. I thank God for Sarah,” George said.

The proposal: George said he just proposed one day, in March of 2000. “I asked Sarah to marry me and she politely said yes. I was happy that she said yes because I had been single for so long, it was the right move and the right time,” he said.

The wedding: The couple got married at George’s mother’s house in East Thomas. While there were no colors for the wedding, Sarah bought a jean dress and George had jeans and a shirt on to match each other. Claude Jones was the pastor, from Glorious Temple Faith Ministries.

Most memorable moment for the bride was during and after the vows. “When he put the ring on my finger and he kissed me, we both smiled and everyone cheered,” she said.

Most memorable moment for the groom was knowing his parents were there. “When my mother and father saw us getting married, that was memorable for me,” he said.

Words of wisdom: “When you marry make sure you pray and ask God to give you knowledge and wisdom,” George said. “Make sure that God is there with you. When you marry, you’re making a big step, and you and the wife have to be on the same page. You’re going to have ups and down, but you have to get through them. Don’t ever go to bed mad at each other. You need to always treat your wife with love and let her know that she is cared for and appreciated. The man’s job is to make sure the woman is always taken care of. Show her kindness and put her up on a pedestal. Let the world know that you are proud to marry this beautiful lady.”

Sarah said it was important to put God first. “A strong relationship is when you know you both have the same ideals, and that God leads you. Sometimes you can meet someone and it’s not the right person. Wait on God,” she said. “God led me to George. I know this marriage was from God . . .  We just have to make sure that God leads.”

Happily Ever After: George, 69, grew up in East Thomas and attended A.H. Parker High School. He attended Lawson State Community College for three years and is a Vietnam veteran who served in the U.S. Army.

Sarah, 70, grew up in Smithfield and also attended A.H. Parker High School. Both are currently retired.

Sarah and George enjoyed traveling prior to the pandemic. Sarah did a lot of speaking engagements in-person, but most of them occur through Zoom. Sarah calls George her secretary, as he helps set up the Zoom calls and streamlines the interview process. Their favorite hobby is spending time together.

Sarah wrote a book, published in November of 2020, about her experience of being the lone survivor of the church bombing, and the struggle and pain she faced for a lifetime after the horrific attack on the church titled “The Fifth Little Girl”, published by Africa World Press. The book can be purchased on Amazon.