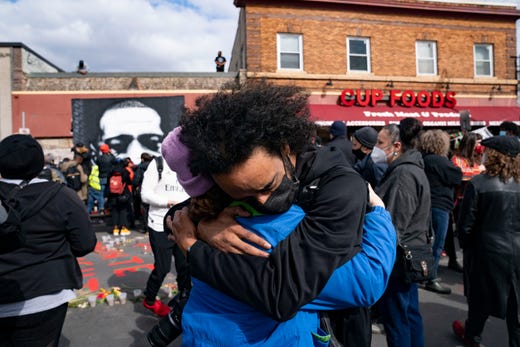 Justice has been served.

That was the consensus of many Birmingham-area leaders after Minneapolis police officer Derek Chauvin was convicted on Tuesday of murder and manslaughter in the death of George Floyd.

Floyd died last May after Chauvin, a white officer, pinned his knee on or close to the 46-year-old Black man’s neck for about nine and a half minutes.

Floyd’s death, which was caught on viral video for the world to see, sparked nationwide protests and civil unrests, including in Birmingham.

Here’s what area leaders said after the verdict. These are excerpts of their comments.

MAYOR RANDALL WOODFIN: “For far too long the people’s demands for justice and accountability following the deaths of unarmed civilians by police have gone unanswered. Today’s verdict marks a turning point where equal justice under the law should become accessible to every community.

“[On Tuesday], the Floyd family was given the accountability that they deserve, but nothing in this verdict will bring George Floyd back to his loved ones. I hope that the Floyd family is able to find some peace in today’s verdict.

“The verdict is vindication to those of us who know that change is possible with courage and an unwavering commitment to justice. We must continue to press forward with the systemic reforms that are needed to fix our broken criminal justice system, ensure accountability, and protect all communities, including when the perpetrators are law enforcement.”

REP. TERRI SEWELL (AL-07): “Last summer, our nation watched in horror for an excruciating 8 minutes and 46 seconds as police officer Derek Chauvin knelt on the neck of George Floyd. [On Tuesday], after a three-week trial, the jury found Chauvin guilty on all three counts for the murder of George P. Floyd.

“While this verdict will not bring George Floyd back to his family and loved ones, I believe justice was served. This conviction is a step forward in American’s ongoing search for true justice in the senseless killing of unarmed Black Americans at the hands of those whose job it is to serve and protect. The onus continues to fall on Congress and the federal government to comprehensively address police brutality and hold police accountable. We must not rest until the George Floyd Justice in Policing Act is signed into law.

SHEILA TYSON, CONVENOR OF THE BLACK WOMEN’S ROUNDTABLE AND JEFFERSON COUNTY COMMISSIONER: “Tears of joy and disbelief filled my heart . . . after the verdict of George Floyd’s murderer, I feel seen. . . Today, I dare to dream that change can continue to happen. I dare to dream that I am seen and my Black life matters. It matters not because of who I am, but because I am human… because I lived to see this verdict, I dare to dream.”

[Tuesday] is a day of reckoning – a day in which the arc of the moral universe bent a little more towards justice. We, along with the rest of the world, watched as a jury in Minneapolis delivered guilty verdicts on all counts against the man who murdered George Floyd in front of our eyes. . . . To the family and friends of Mr. Floyd: Birmingham weeps for your loss and we stand beside you as justice is delivered. [Tuesday] gives us all hope for a better future – one in which justice can and will prevail no matter how hopeless it seems.”

BIRMINGHAM POLICE CHIEF PATRICK SMITH: The Birmingham Police Department has shared sentiments in the fight for justice in the death of George Floyd. BPD took an early stance of solidarity with the community to stand against police brutality. Now that a verdict has been reached in the Derek Chauvin trial, it is my hope that we can begin a healing process and forge to make the necessary changes to prevent these types of injustices. We must continue our unrelenting efforts to fully improve the service we provide to all communities.

“In the wake of an unparalleled verdict in the Minnesota v. Derek Chauvin trial, The Birmingham Civil Rights Institute is curating sacred space for us to sit with yesterday’s outcomes. In conjunction with community partners, we will provide healthy channels for addressing the needs of our community to reflect and engage with one another throughout the next several days.

History has taught us that in moments like these, we are stronger together. We will host a healing circle for our community to come, reflect, and share space with each other as we absorb the weight of the moment. George Floyd’s story is indeed an American story. And all too often, communities are left with the weight of the trauma and disruption that are created by stories like these. Throughout the month of May, we plan to offer 100 hours of free mental health workshops and individualized sessions facilitated by licensed mental health professionals.

ALABAMA DEMOCRATIC PARTY CHAIR REP. CHRIS ENGLAND: “Last summer, the entire world watched as George Floyd was murdered by an officer from the Minneapolis Police as other officers sat and watched . . . Even though the jury found Derek Chauvin guilty, this is not what justice should look like. We will not have justice until Black Americans know that their lives are not at risk every time they encounter the police and they can also have confidence that those officers that use excessive force will be held accountable in courtrooms across the country.”

BENARD SIMELTON, NAACP PRESIDENT FOR ALABAMA, “When you start treating a person less like a human being, treating them like a dog or something like that, that’s when you cross a line. [The jury] heard and saw the same thing. [Derek Chauvin] murdered George Floyd. I’m hoping police officers will reach out to community organizations like NAACP [National Association for the Advancement of Colored People], SCLC [Southern Christian Leadership Conference], and other community organizations that are out there trying to ensure justice and equality for all.”