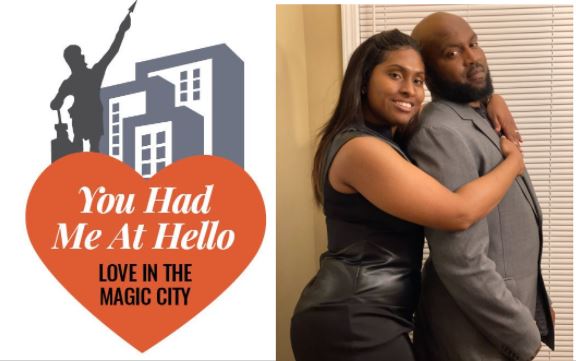 Met: January 2017, in Midfield at Piggly Wiggly. Amario was the produce manager and Christina was a frequent shopper. “I worked at the pharmacy next door and always stopped in for fruit in the mornings… I noticed how handsome he was because he was always working with the produce, and one day we made eye contact, and on my way out the door he was standing by the drink machine and he stopped me and asked me my name. I told him, but couldn’t stay and talk, I had to get to work,” Christina said.

Amario remembered how he plotted how to make his move. “I thought about leaving a letter on her car but I thought that would’ve been kinda stalkerish,” he laughed. “So I sent a cashier into the pharmacy to give her my number . . .She never called so I thought she must’ve been in a relationship.”

Fast forward six months, both Christina and Amario had been reassigned to different locations, and both ended up at the Piggly Wiggly in Woodlawn.

“The Mills Pharmacy in Woodlawn was inside the Piggly Wiggly and I was going to get lunch for me and my boss, and noticed a guy sleeping in the car next to mine. My car alarm went off and I couldn’t turn it off, that woke him up and when he sat up we instantly remembered each other and started talking. He got out and helped me shut off the alarm.”

“I was like ‘oh my God, it’s her’,” said Amario. “…that was my second chance, I asked her for her number but she wouldn’t give it to me, she took mine. I remember it took her a few days to use it, I was thinking I had struck out again.”

First date: October 2017, at Ninja’s Japanese Restaurant in McCalla. After dinner they went to see a movie at Premiere Cinema-14 Tannehill in McCalla.

“We had been talking on the phone for months, so we were comfortable with each other. I was always happy with how good our conversations were,” Christina said. “We laughed, I enjoyed my lemon drop martini and said yes I’d go see a movie after dinner with him.”

Amario wasn’t ready for the night to end, “after the movies we still wasn’t ready to leave each other but we both had teenagers at home, so I offered to get a hotel room so we could kick it longer. I told her I didn’t want anything from her, I just wanted to hold her if she’d let me,” Amario said.

“And that’s all he did, he was a perfect gentleman all night,” Christina said.

The turn: “It was right before Christmas [2017], I met his children and he met mine. Our feelings started getting serious and I was a little nervous about falling for him because I had gotten a divorce four years ago and didn’t think I would ever get married again. But because of the way that we ran into each other [the second time], it always felt like God put us together.”

“I liked the way she carried herself as a woman,” Amario said. “She was very cautious and God fearing. I watched how she prayed and wanted to be right with the Lord, and I’m a minister so that stuck out to me. I had been married before too, and I knew the next time would be the right time.”

“We had some issues that came up and it made me want to pack up my kids, and go back home [Rialto, CA]. But he showed up at my door and told me that he didn’t want me to leave and that he felt like I was his wife. We had a long talk, we literally talked all night and I decided that I would marry him.,” Christina said.

“When she told me she was leaving I felt like that was the end of my world because I felt like she was my wife and my future,” Amario said. “Her inner beauty and her spirituality are something that I never had with another woman, and I knew she was who I was supposed to spend the rest of my life with. Once she said she’d marry me, I wanted to do it the next day, but we waited two weeks and went to the courthouse.” 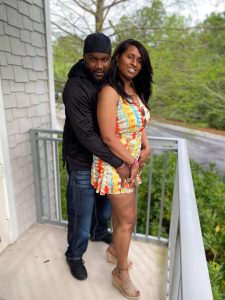 The wedding: Downtown Birmingham Courthouse, officiated by a courthouse clergyman.

Most memorable for the bride: “I remember how happy I was. I was really excited, and I remember saying to myself that I knew I had made the right decision. Most interesting was that as soon as we said ‘I Do’ we both went straight to work [at Mills Pharmacy and Piggly Wiggly in Woodlawn], and I remember walking into work saying ‘I’m married’ and everybody started cheering for me,” Christina said.

Most memorable for the groom was the smile on his bride. “When the judge pronounced us husband and wife her smile told me how happy she was to be my wife. I felt complete,” Amario said.

Words of wisdom: “Don’t let anything jeopardize the love that you have for each other, keep outsiders out of your marriage and always have God as the center, He should always be first. A family that prays together stays together, always ask God for wisdom and guidance and let God direct your path,” Amario said.

“Before you get married make sure you know yourself and you love yourself, don’t rush into anything,” Christina said. “Make sure you have a strong relationship with God so that when you come together and join as one, you’ll have that Godly connection. Pray together and do not ever go to bed mad. Our communication is very strong, if one of us has to cool off we can, but we’ll just grab each other and pray and the frustration just melts away.”

Happily ever after: The Browns are a blended family of 12 children, and share one daughter, A’Ryah, 1. All the unique personalities of their children coming together is happily ever after for them, they said.

Christina, 39, is a San Bernardino, California native and graduate of the Eagle Summit Academy in San Bernardino, CA. She attended Southeastern School of Cosmetology in Midfield, and has been a licensed cosmetologist for 12 years, and a pharmacy technician at Mills Pharmacy for nine.

Amario, 40, is a Fairfield native and Fairfield High Preparatory School grad. He has worked for the Piggly Wiggly franchise for 24 years in the produce department and has been produce manager for 16.