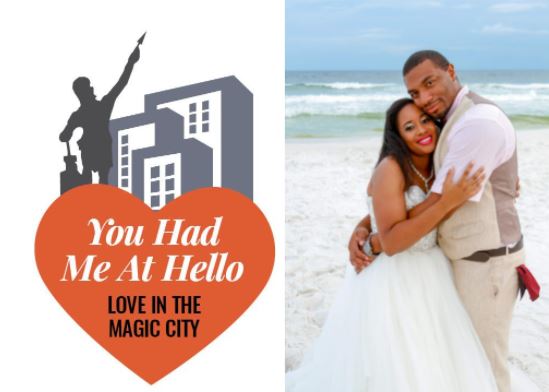 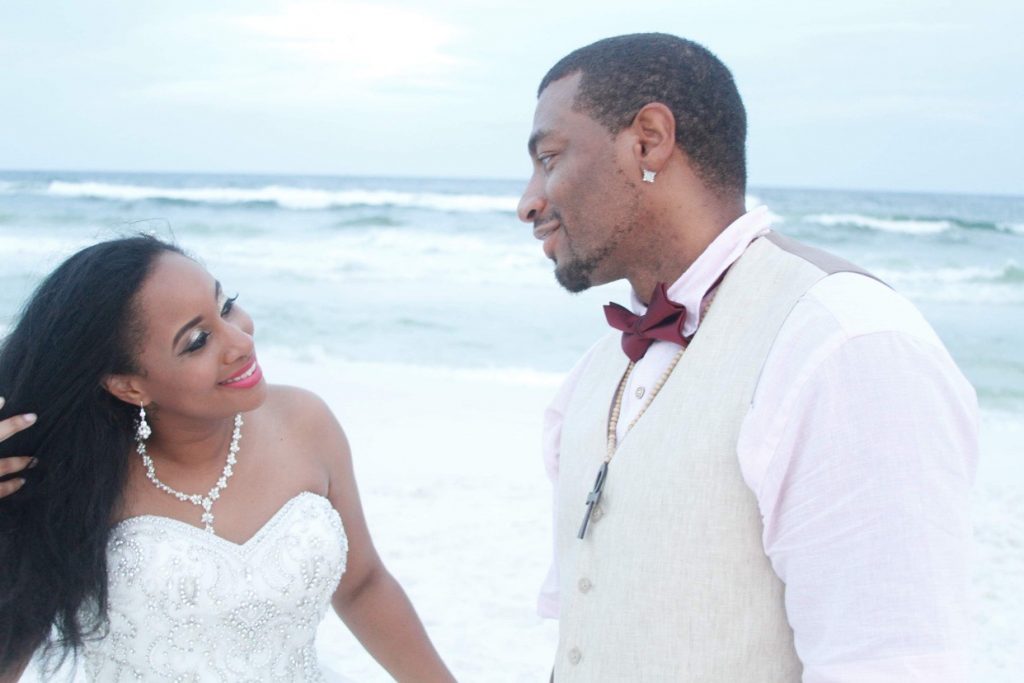 The two were Facebook friends, and Eric said he noticed how amused she was by his online comedy and that she would frequently laugh and comment at his posts. “But I didn’t pay it that much attention because I was in a relationship,” Eric said, “but once I got out of the relationship, I [thought about her] and went back to her profile and looked at her pictures and asked her if she wanted to meet.”

The pair met up at The Merienda Lounge in Birmingham, and when Melisa arrived, Eric “was already on the dance floor,” he said. “When I saw her I was very impressed by her beauty.”

Melisa remembered Eric asked in his first message “are we kin,” Melisa laughed. ‘We both had the last name Jones, and I guess he wanted to make sure we weren’t family before [he started flirting]”

Still, Melisa had her reservations about meeting Eric. “To be honest, I really didn’t want to meet him, but my friend Brittney convinced me to go ahead and meet him, and I said ‘ok, let’s get this over with.’

After meeting Eric, Melisa thought he was a ladies man. “I was thinking we’ll just see how this goes,” she said.

First date: December, 2015. Eric and Melisa went to see ‘Krampus’ at The Edge 15 theater in Crestwood, and to dinner at Chili’s on Lakeshore Dr. after the movie.

Eric remembers picking Melisa up from her Forestdale apartment, heading to the movies, and dinner afterwards. But more vivid are memories of the dinner.

“I ordered some burger sliders and she ordered a chicken quesadilla and she didn’t like it… I offered her my burgers and she ended up eating all three,” Eric laughed. “And she did it with no shame, it was so cute, and at that moment I knew that I wanted to start taking her and our relationship seriously.”

Melisa said Eric was the ultimate gentleman, and “he was so annoyed that I kept trying to open my own door, he didn’t want me to touch a door, and I wasn’t used to that,” Melisa said. “And I did eat all of his food, and he let me because he was a gentleman, and he ate my quesadillas [which] I know he didn’t like.”

What Melisa didn’t like about the evening was the movie. “…it was a stupid comedy but I tried not to hold it against him,” she said, “it ended up being a great first date.”

The turn: For Melisa, it was Feb, 2016. “He always texted back and answered the phone, he never tried to play it cool and [stall on responding]. One night he came over to my apartment and I realized he was really taking me seriously, and we established that we were in a relationship,” Melisa said.

For Eric, it was March 2016. “She was very easy going and she brought me peace in my life,” Eric said. “I had been through very chaotic relationships, and she wasn’t that way. Being around each other felt good and she was making my life better.”

The proposal: November 2016, at Brookwood Mall, in Birmingham. Eric and Melisa were taking a casual stroll through the mall when Eric suggested they stop in Kay Jewelers.

“I asked her if she wanted to go inside and try on rings…And she found a really pretty ring band and I asked her if she was sure that she liked it and she said I love it, and I got down on one knee and proposed right there. Everyone started clapping, we hugged and kissed and went on with our day.”

Melisa said she didn’t find anything suspicious about Eric’s suggestion to try on jewelry. “We had been in Kay Jewelers before so I didn’t pay it no mind,” she said. “I went in looking like I would any other day, and then when he dropped down and proposed I was surprised. It was sweet, I was really happy,” Melisa said.

The wedding: Okaloosa Island, Florida at the Islander by Wyndham Resort, officiated by a clergyman from Surfside brides [the wedding planners]. The couple’s colors were light pink, ivory and wine.

Most memorable for the bride was a wardrobe malfunction during the nuptials.  “While we were standing at the altar I dropped the piece of paper with my vows on it, and when I reached down to pick it up the buttons on my dress popped,” Melisa said. “It made a loud noise, I felt like everybody heard it…[The dress was tight] I had barely gotten in it, and I had to hold my dress up for the rest of the time.”

Most memorable for the groom was also a wardrobe mishap “When I was preparing my clothes, I was ironing my shirt and evidently the iron was broken, and I kept trying to iron and the water kept spilling out of it and I thought I was going to have to buy a new shirt 15 minutes before the wedding,” Eric said. “But we ended up getting another iron and I was able to get it dry and get dressed two minutes before we needed to walk out the door.”

Also, “seeing my bride for the first time…. After seeing how beautiful Melisa was

I knew that all the hard work preparing for this day was worth it and I started to cry,” Eric said.

The couple honeymooned that following spring in Runaway Bay Jamaica.

Words of wisdom: “Know your partner’s love language because what you may think needs to be done to fix a problem or how you may address things is not how they [need it to be done]. Instead of trying to do things [your way] you have to take the time to understand [their needs and desires] and how they will understand [you]. We have two totally different languages and it’s so much easier when you take their lead on how they want to be approached,” Melisa said.

“Make sure that you’re able to communicate your differences, no matter the situation, because truth, understanding, honesty and trust are some of the most important things that you can have in a relationship,” Eric said. “Make sure you never break that bond of trust because once it’s broken, it’s hard to replace.”

Happily ever after: The Jones’s have three children, daughters: Kendall, 12, Ava, 4, Harper, one week old.

Melisa, 35, is a Dolton, Illinois native and a Minor High School grad. She attended Fortis Institute [Birmingham], where she earned an associate’s degree in science and dental hygiene, and works as a travel dental hygienist

Eric, 37, is a Forestdale native and Minor High School grad. He attended Miles College, where he earned a bachelor’s degree in computer information and science and works as a service technician for Spire Energy.