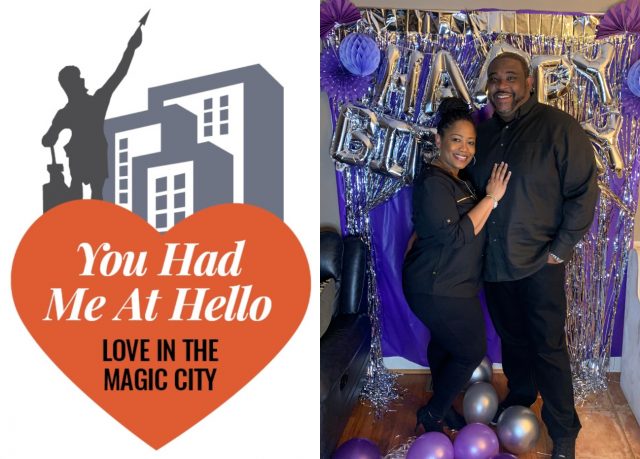 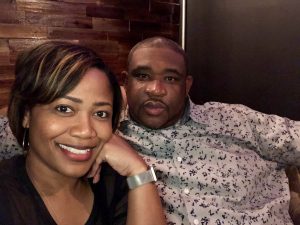 Met: Summer 1997 at Auburn University in the quad. “I was in a summer program [that worked on] getting people from minority backgrounds into college…and it was our second day on campus and we hadn’t seen any Black boys,” Sabrina said. “So when me and two other friends saw [Colin and friends] walking by from the window we [got excited] and we started hollering at them telling them to wait right there, we’ll come down,” Sabrina said. “Initially, Colin was kind of cocky and smart mouthed, but I was interested so I wrote my number in his hand.”

“I was a football player and me and some buddies were walking across campus coming back from some workouts,” recalled Colin, “… Sabrina was very spirited. I didn’t want to let her get away, so on the way back to my dorm I stopped the first person I saw with a backpack and asked her for a piece of paper and a pen,” Colin laughed. “I wrote Sabrina’s number down twice, so just in case I lost one copy I’d have the other.”

First date: Fall 1997 at Chili’s in Auburn. “I was trying to act all cute [picking at my food], and the plan was to take the rest home and eat it at my apartment, but this dude ate his food and said ‘uh, you not gonna eat your food? Slide your plate over here.’” Sabrina laughed, “so I slid my plate over and left the first date hungry.”

“The date was fun,” Colin said, “I remember laughing a lot. We weren’t old enough to order drinks, the conversation was real casual. I remember talking about her home life and where she grew up and it was very similar to my hometown and my upbringing . . . I also remember she had to drive because at the time my car was overheating and she had to come pick me up from the dorm.”

The turn: For Sabrina it was January 1998. “During football season Colin had a very rigorous schedule, but after [the season] we had a conversation where we discussed being boyfriend and girlfriend,” Sabrina recalled.

For Colin it was late fall 1998. “That’s when I got my first apartment, I had moved out of the dorm, my mom, dad and [siblings] were starting to come down for football games and would spend the weekend with me. And one weekend after a game, my family was there and Sabrina came over and I saw how she interacted with my folks. When she came over the laughter didn’t stop, everything just meshed, and Sabrina was having a conversation with my dad like it wasn’t nothing and my dad didn’t talk a lot, it was hard to get him to talk and she opened him up,” Colin said.

“I remember my dad [enforcing to live off of a preset budget] because I moved out of the dorms and he didn’t want me to, so he told me that I would have to make do because he wasn’t giving me any extra . . .then he would ask Sabrina if she needed anything and she would talk about working and paying bills and this man would pull out a wad of money to give to her . . . that’s when it really started to click that my family loved Sabrina and this could really work.”

The proposal: March 2002, at the Colonnade on U.S. 280 in front of the water fountain. Colin had graduated from Auburn, and Sabrina would graduate that August. “I had been out of school for a year, I pursued playing professional football and that didn’t work out so I took a job at BellSouth in Birmingham. Sabrina was still in Auburn and was planning to go to Atlanta . . . and to get her to come to town after leaving Atlanta, I started an argument with her that I made her think she had to come to Birmingham to fix. So, she came down, and I said, ‘let’s go out to eat and talk about it over dinner’, and I took a detour … We got to the water fountain and we sat down and she looked off staring into space and I took that as my opportunity to pull out the ring and get down on one knee,” Colin said. “When she looked back around I was on one knee and I asked her to marry me, and her first response was ‘did you ask my dad?’, and I said ‘yes, I sure did’. And she said ‘yes’.”

Once Sabrina saw Colin down on bended knee, “I was thinking ‘oh my goodness, I cannot believe this is happening’,” she said. “I was excited, we had talked about marriage, but I thought he was going to wait until after I graduated from college. I loved the ring, but I knew I couldn’t say ‘yes’ unless he had my daddy’s blessing” which he had.

The wedding: In Demopolis Ala. at Sabrina’s home church, Morning Star Baptist Church, officiated by her uncle, Reverend Charlie Moore. Their colors were lavender, canary and cream.

Most memorable for the bride was the church being packed. “My church has a balcony and people were in the balcony, people were standing up against the walls, and when I was walking down the aisle with my dad, he said, ‘look at all these folks’, and we were shocked because we had no idea all those people were there since we were the last ones [to enter] the sanctuary,” Sabrina said.

Most memorable for the groom was running into his bride the morning of the wedding. “We were trying to be traditional, and not see each other before the wedding, so we [Colin and his groomsmen] stayed at the hotel, and Sabrina stayed with her parents. The morning of [the wedding] when we went down to get breakfast, Sabrina was standing at the front desk,” Colin said. “I saw her and she started trying to hide around a corner.”

The couple honeymooned in Orlando Florida at Disney. “We didn’t want to spend all of our wedding money on the honeymoon, but we wanted to go to Seaworld, we just didn’t want to pay for the tickets. So, we went to a timeshare meeting just to get free tickets to SeaWorld and didn’t buy a timeshare,” Sabrina laughed.

Words of wisdom: “Compromise,” Sabrina said. “I have been called spoiled, so putting his needs before my wants is something I had to learn early on in the marriage. Making sure that he’s taken care of as far as supporting him in his work and things that he wants to do. We have two boys, so my husband has to work out a balance to make sure we spend the time we need together,” Sabrina said.

Colin said, “The key for our marriage is neither one of us takes ourselves too seriously. We both know we’re not perfect and have flaws. We own up to our mistakes and we move on. There’s a lot of laughter in our marriage, we have fun, we enjoy each other’s company. She’ll attend sporting events with me and I’ll go shopping with her. We find time for one another outside of the kids. When things are getting off kilter, we’ll order the kids a pizza and we’ll go out to dinner, even on a weeknight. We’ll go spend three or four hours out together.”

Colin, 42, is a Russellville [Northwest Ala.] native, and Russellville High School grad. He attended Auburn University where he earned a bachelor’s degree in management information systems and now works as a data center sales rep for Dell technology covering the Southeast Gulf states. 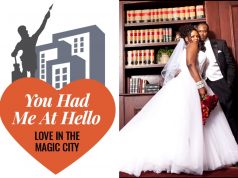 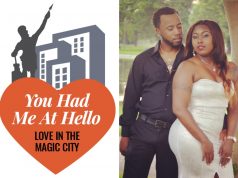 ‘I really started falling in love with her, so we made that move’