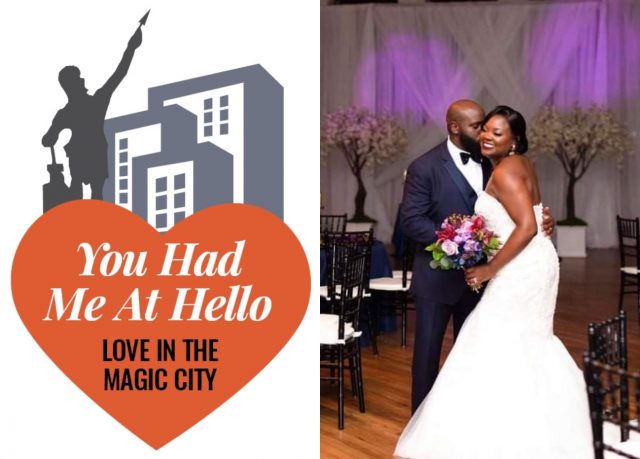 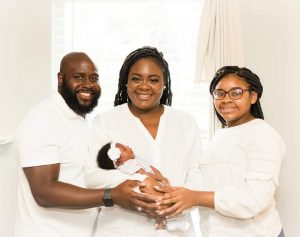 “A mutual friend [named] Sonni approached me and asked me if I’d be interested in talking to a friend of hers. I was apprehensive at first because I was coming out of a relationship [and] we never talked at work, so I was a little surprised [by Whitney’s interest],” Derrick said. “Two weeks later I got a text message from Whitney.”

“Derrick was just coming back to work [after his mother, Coral Lewis’ passing] and Sonni told me to walk over to his cubicle with her to give our condolences . . . without me telling her to [play matchmaker] Sonni went and got his number, and she came back over to my cubicle and said ‘I’m going to slide this under your keyboard. And when she walked off I lifted my keyboard and it was a piece of paper with Derrick’s number on it, and at the bottom it said ‘hit me up anytime.’  And I said, ‘oh no, I’m not doing this, because I don’t do workplace relationships, I know how those can go’… It took me two weeks to reach out to him because I had to deeply think and pray about reaching out,” Whitney said.

First date: July, 2015, at Longhorn Steakhouse on 280. “It was a typical first date, but there weren’t any first date nerves,” Derrick said, “It was comfortable. Whitney was actually preparing to move to Florida the next day. There were never any awkward moments or dead air, it was really natural chemistry between us. We clicked right off the bat.”

Whitney said, “We had had pretty good conversations over the phone beforehand and it always flowed like we had been friends forever. I did not try to eat cute and order small, I got me a steak and chowed down; I was comfortable,” Whitney laughed.

She moved to Florida for six months to take a federal government job. The two remained friends and talked every day, and when she came home [Birmingham] every other weekend, she and Derrick would hang out.

The turn: For Whitney it was September of 2016. “I wanted to know if we were going to move to the next level and become boyfriend and girlfriend, and his response was ‘I mean, we can keep it like it is’, and I said ‘bet!’,” she laughed. “I stopped talking to him, I went out of town and started doing me, … A few weeks later he texted me trying to get my attention, saying that he missed me and that the time that we weren’t talking he realized how much he really liked me. We started back talking… That December he asked me to be his girlfriend,” said Whitney.

For Derrick it was late December 2016.

“I had to have a come to Jesus moment with myself and had to be real. I asked myself ‘why I was putting it off when I clearly liked this woman?’ That December we were at her place [in Center Point] watching tv and I rolled over and asked her if she would be my girlfriend.”

The proposal: June 8, 2018, during Derrick’s family’s annual trip to Orange Beach, Florida. “My dad extended the invitation to Whitney and her daughter Kalia, and I took that as the perfect opportunity to propose,” said Derrick. “One night we were out having drinks with my brother and sister [and their spouses], and I said [to Whitney] ‘we hadn’t had any alone time on the trip, let’s go take a walk on the beach.’ We were out on the beach listening to the waves, and she was saying how nice and calming it was being by the water… I said, ‘it really is, and I enjoy spending time with you, and I want to spend a lot more time with you but this time I want you to spend the rest of your life with me.’ I got down on my knee and I asked Whitney if she would marry me, and she screamed and knocked the ring out of my hand and into the sand,” Derrick laughed. “I picked it up, blew it off and said ‘Whitney, one more time, will you marry me?’ and she said ‘yes’ and just started screaming nonstop, saying ‘I’m a finance’ now!’.”

Whitney said she was in total shock. “I was kind of in a bad mood all day because [I wanted to go to the beach] and he kept brushing me off, so I was kinda in a funk, so when he finally said let’s go to the beach later that night, I was over it… When he put the ring on, I was like ‘oooh, this baby is nice!,” Whitney said. “I giggled for the longest.”

“When we walked back to the jeep, I said ‘I need to call my mom’, and it was after midnight but she answered, and I was surprised, but it was because she knew. Even my best friends knew, they tricked me into telling them my ring size for him, they were all in on it.”

The wedding: At the Thomas Jefferson Towers [downtown Birmingham], officiated by her godfather, Pastor Larry B. Woodruff. Their colors were navy blue and eggplant.

Most memorable for the bride was presenting Derrick with a gift before the wedding.

“I had a painted portrait of his mother, who they affectionately called ‘Sunshine’, [who passed away in 2015] and wasn’t there to see him get married; from all the stories Derrick told me about her, I knew how important his mom was to him as the matriarch of their family, and I wanted to give him something to let him know that she was still with him. My oldest daughter, Kalia, and godsister, Dana, took it to his room the morning of the wedding. He was overwhelmed, crying and hugging Kalia. I heard everybody in the room was crying, his sister and brother’s reaction to it was golden,” Whitney said.

Most memorable for the groom was when he first laid eyes on his bride.

“When she walked in with her dad, I immediately started crying and I said, ‘I wasn’t going to cry,’ and I lost the bet [with my groomsmen]. As she got closer, I started trying to calm myself down, and when she got to me, I tried to joke and be silly to [lighten the moment] and smiled and said ‘hey bae’, as I tried to keep my eyes from watering up, and she gave me this big smile and that calmed me and relaxed me,” Derrick remembered.

The couple honeymooned in Cancun, Mexico for a week.

Words of wisdom: “Keep God first, He should be in everything that you guys do. Be open, transparent and communicate about everything because this is your life partner, and the person that you’re going to spend the rest of your life with,” Whitney said. “It’s not always easy, but be honest in all things, whether you feel like it may hurt the person or not. Those are some of the things that will help a marriage grow and flourish.”

Derrick said, “Never be afraid to ask your spouse the tough questions even if it does make you uncomfortable asking and [your spouse] answering. Those questions are necessary to keep the bond strong and make it even stronger.”

Happily ever after: The Lewis’s have two daughters, Kalia, 12, Karter, 9 months.

Whitney, 35, is an Ensley native and Ramsay High School grad. She attended the University of Alabama where she earned a bachelor’s degree in communications, and the University of Alabama at Birmingham [UAB] where she obtained a master’s degree in public administration. Whitney works as a supervisory program analyst at the Department of Veteran Affairs.

Derrick, 38, is a Tuscaloosa native, Central High School (Tuscaloosa) grad, and studied criminal justice at the University of Alabama at Birmingham [UAB]. He works as a cash receipt analyst for Drayer/Upstream Rehabilitation in Birmingham.