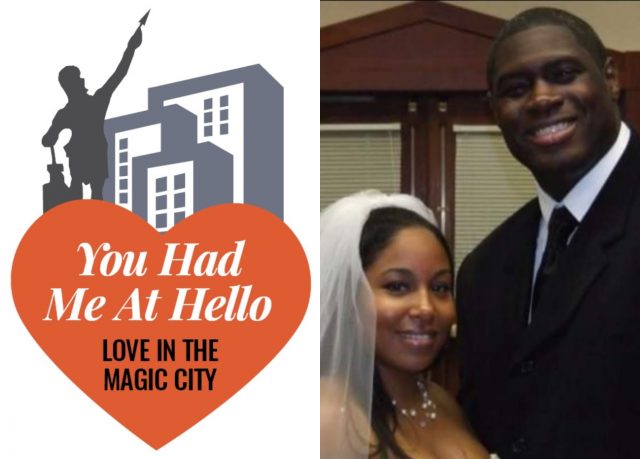 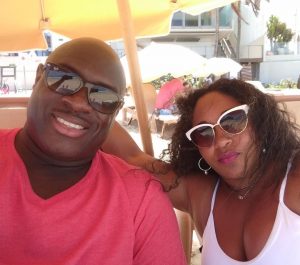 Met: February 2007, at LongHorn Steakhouse in Atlanta, GA. Naomi was a part-time waitress and Ron was there having a business meeting when he couldn’t help noticing Naomi’s beauty. “Ron was with his lawyer and I was waiting on a table across from them and [Ron] sent his server to the kitchen to get me, he wanted me to know he was looking at me… And I agreed to go over to his table and talk,” Naomi said.

“Naomi made me aware she was dating someone at the time, and I told her I didn’t care; I was actually ending a relationship, myself,” he said. “She told me that she worked two jobs, full-time at AirTran Airways, and part time at LongHorn because she wanted to go into [the next year] debt free. And I told her ‘a woman this fine don’t need to be working this hard, and that man don’t love you if he got you working two jobs, baby’…,” said Ron. “We talked for about 15 minutes and she kept insisting that she was dating somebody else, and [I insisted] that she needed to go out with me… every objection she gave me I had an answer for.  Finally, she wrote her first and last name and number down on a napkin for me… I called her every day for two weeks and I would leave her a message, and in that final message said ‘my mother always told me that people make time for the things that are important…and she called me back the next day and told me we could go out on her next off day.”

First date: March 2007. Ron and Naomi agreed to meet at the Atlantic Station [retail complex] and headed to a restaurant in Buckhead, [a residential district near Atlanta] for dinner. Ron did not recognize Naomi when he got there.

“I rolled down my window and [started flirting]. I didn’t know it was her because she looked totally different. Her hair was wild like Chaka Khan… she was even more fine than when I met her, and she walked up to my [Cadillac Escalade] and opened the door and got in,” Ron laughed.

“I could see that he was startled, a little taken aback and I said, ‘you didn’t know it was me, did you?’ And he said, ‘just know I picked you twice’,” Naomi laughed.

“Dinner was “magical,” Naomi said, “we sat and talked for hours, and our waiter thought we were already married. After our late lunch he took me back to my vehicle and we were sitting and talking and he said he was sorry to cut it short, but it was Wednesday and ‘I never miss Wednesday service [at Divine Faith Christian Church, in Jonesboro, GA]. I said, ‘I didn’t want to stand in the way of that,’ and then he asked me if I wanted to go with him, and I said ‘sure’. That when we actually had our first kiss…,” Naomi recalled. “After we left Wednesday night service, we went to see ‘300’ at AMC Southlake Theater and he rubbed my feet the whole time because they were aching from being on them all the time.”

“From there we were inseparable,” Ron said. “Every day for a week I would [go to LongHorn Steakhouse] and order a side salad just so I could sit in her section and talk to her, and I always tipped her $100’s”.

“He pursued me to where I didn’t have a choice,” Naomi said.

The turn: The end of March of that year for both. “The boyfriend I had at the time went through my phone while I was asleep and found some text messages from Ron and began to question me. I came clean, I was swept off my feet and I couldn’t deny it. We had actually put down earnest money for a home we were trying to buy, and Ron said don’t worry about it, let [my ex] keep it as a consolation prize,” Naomi said. “I took all my belongings and moved [out].”

Ron said he was wrapping up a relationship also. He and his ex “had purchased my dream home… …but I also had a condo downtown, ATL, and I took Naomi to see it and she loved it and said we can start our new life here,” he said. “I left an 8,000 square-foot house to live in an 800 square-foot condo with Naomi. I had already been married before, I was divorced for eight years before meeting Naomi. I had been in another relationship that was ending, so when I found Naomi, I knew she was what I had been looking for,” Ron said.

“I took her back to the same restaurant that I met her and got down on one knee and asked her to marry me in front of the whole restaurant and all her co-workers,” Ron said. “Everyone was so happy for us and were rooting for us because of all the times I would come to the restaurant to pursue Naomi… She said ‘yes’.”

“I was still working there part-time, but I was off that day… I was extremely excited, I felt swept off my feet,” Naomi said. “I was in love with the fact that I knew I was marrying a man that I knew I was going to grow to love very deeply. He was extremely romantic, said and did all the right things all the time, and he melted my heart.”

He even had her mother’s blessing. “She prayed over us and told us if we ever needed anything she was here for us; I love her,” he said.

“Before Ron proposed he met my mom [Dawn Brewer] and aunts a few weeks prior and my mom instantly fell in love with him,” Naomi said.

The wedding: In Atlanta, at Fulton County Courthouse, officiated by a judge. Ron wore a tuxedo, and Naomi wore a bridal dress. The two eloped and didn’t tell anyone, except for Ron’s godfather, Kenny Walker, who attended and took photos, and Naomi’s best friend Anell, who attended and brought her flower bouquet to walk down the aisle with.

Most memorable for the bride was their first kiss as husband and wife.

“The amount of adrenaline, love, and passion that I felt, everything hit me at that moment and I looked at him and fell deeper in love,” Naomi said. “Everything I felt that day I still feel till this day 14 years later.”

Most memorable for the groom was thanking God for his new union and reliving their first date as husband and wife. “When I was standing there with the judge I was looking at Naomi and thinking that she was such a beautiful person and I thanked God for blessing me,” Ron said. “Afterwards, everything we did on our first date we did on our wedding day. We went back to Houston’s for dinner, we went to Wednesday night service [Divine Faith Christian Church, in Jonesboro, GA] in our wedding attire, and to the movies at the same theater. That night we slept at the Georgia Terrace Hotel, downtown, ATL.”

For the honeymoon, the couple flew to Miami and went on a cruise through the Florida Keys and the Bahamas.

Words of wisdom: “Patience with one another and with yourself. You have to learn one another’s love language. You have to learn how to communicate with each other and to pray together,”. Naomi said. “Faith through the rough times and choosing each other every single day is a must. No matter what we are going through, we always choose to love each other, no matter the circumstance, we come back home to each other, and stay with our person; he’s my person”

“My bishop, Bishop Jerome Dukes told me– ‘in marriage, it’s none of your business how she treats you, your only business is how you treat her; that’s what your job is. And if you both have that same mentality, to make sure the other is good, you’ll both be taken care of,” Ron said.

Happily ever after: The Brown’s have four children: Paige, 22, Ashton, 16, from Ron’s previous marriage, and Waljeron Jr., 10, Jaxson, 8 from their union.

Naomi, 41, is a Willingboro, New Jersey native, by way of Stone Mountain, Georgia, and graduated from Clarkston High School [Stone Mountain, GA]. She attended Atlanta Christian College [now Point Christian University] where she studied organizational leadership, and Ashford College [online], where she earned a bachelor’s degree in organizational leadership. Naomi is a published children’s author and recently released ‘The Candy Monster’, and is a singer in Birmingham based band, ‘The Original Point of View’.

Ron, 46, is a West side of Chicago native, and attended Holy Trinity High School [Chicago]. He attended Atlanta Christian College [now Point Christian University] where he earned a bachelor’s degree in Christian Ministries, and Birmingham School of Law, where he obtained a Juris Doctorate. Ron owns/operates Pivot Consulting LLC in Birmingham