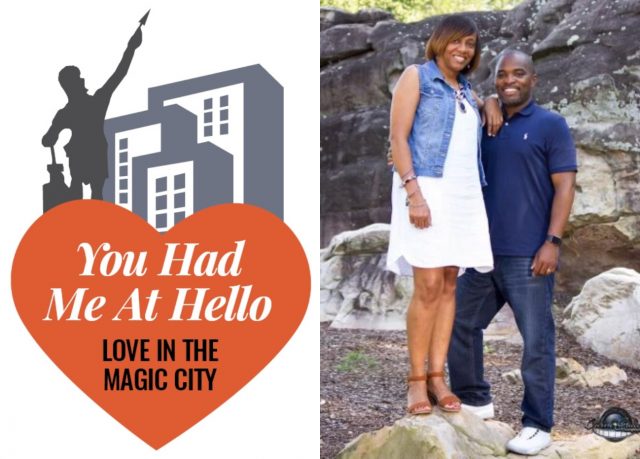 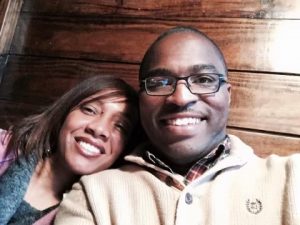 Met: Fall 1998, at Auburn University in gospel choir practice. Toni was a singer, and Eddie was a drummer.

Eddie said that Toni hadn’t been a part of the choir in previous seasons, “…so when the fall hit and the new gospel choir [season started], I saw her and said ‘wow, who is this girl?’ I was immediately interested, I thought she was very pretty,” Eddie recalled. “I talked to her after practice, and we became really good friends; for about a year there was no boyfriend and girlfriend stuff, she was strictly the homie. We would cook or she would BBQ something, we’d watch ‘Survivor’ on TV, and just hang out. After a year, I knew I wanted to be more than friends, but I valued our friendship and was scared to ruin that… I didn’t want to lose my friend trying to move it to the next level. But I remember trying to get up the courage [to call and tell her]. I asked her if she wanted to go to dinner but not as friends, on a date. There was an awkward pause and then she agreed.”

Toni recalled the night of the phone call “…he told me he enjoyed being around me and that he wanted to be more than friends, and my comment was we can [go on a date], and just see what happens,” Toni said.

First date: Fall 1999, at Outback Steakhouse in Auburn. “I’m a broke college student and I think my check was about $70, I thought that should be enough for us to eat like kings, and she ordered the biggest steak in there,” Eddie remembered. “They brought the steak out and she picked and nibbled at it, and all I could think while I was watching was that all my work study hours was going to waste,” Eddie laughed. “At the end, I told them to wrap that steak up, we’re going to take that home.”

“We sat in the restaurant and talked for a long time,” Toni said. “This [night] is where the relationship part started to develop for us… that was our first night out as a couple, and then we went back to my mobile home and chilled and watched TV and movies.”

The turn: Late October 1999. “The minute that date was over, it was like a [roller coaster], I could feel the chemistry change between us, it was electrifying and I could tell it wasn’t the ‘homie touch’ anymore…” said Eddie “The dating/friend/courtship period, we had already had [during that] year we were just friends, so we already knew who each other were. After the first date, we bypassed all that and went straight into what’s love for us, ‘what does being in love look like for us?’ That was the first time that I knew I was in love and didn’t just love somebody. It was the first time where I didn’t care what anybody thought, or had to say, I knew I was in love with her.”

“It was like a light switch flipped on,” Toni said. “We always hung out after gospel choir, so we had already courted as friends, and I guess after a couple times going out on [real dates] it clicked that this could really be it, he might be the one. And before you know it, we were married.”

The proposal: Spring Break 2000, on the beach in Gulf Shores, Ala. “It was nighttime and we went for a walk on the beach, and we got to a pavilion and I asked her to sit down. I pretended to drop something and reached down and went in my pocket and pulled out the ring, and when I came back up, I opened the box and asked her if she would marry me,” Eddie said.

Toni was caught off guard. “I thought we were just having a beach trip, I didn’t realize I was about to be proposed to,” she said. “When Eddie pulled out the ring I was in shock because he actually had a ring in his hand, so when he opened up the box, in my head, I was like ‘oh my god, is he really about to ask me to marry him?’ I was in total shock. I didn’t pause for that long before I said ‘yes’.”

“I went old school,” Eddie added. “I had already talked to her father and had his blessing before that day.”

The wedding: White Street Missionary Baptist Church, in Auburn, officiated by Pastor Johnny Green. Eddie wore khakis and a shirt and tie, and Toni wore a brown pantsuit.  “I was already out of school, and he was about to graduate a few months later, so we didn’t want to push it out to have a big wedding and we didn’t want to wait either,” Toni said. “We did it at the church with our two friends from college [who witnessed] and the pastor we did premarital counseling sessions with.”

Most memorable for the bride was how calm she was. “We woke up that morning like it’s game time, ain’t no backing out now, but we were ready,” Toni said. “I didn’t have the nervous, cold feet. Even though we were up there at school and our families couldn’t be there, it still never changed my wanting to get married on that day at that time.”

Most memorable for the groom was his decision to get married. “I knew marrying her was right for me. I had kinda joked the first night I saw her in gospel choir saying she was going to be my wife, so that day brought us full circle. Toni was something I was so sure of. Both of our families were very traditional, and it was bittersweet because they weren’t there to share the moment with us, but we knew we loved each other and we were doing the right thing. I knew she was the one I was supposed to be with.” said Eddie.

The couple honeymooned in Birmingham.

“We got married the weekend of the SWAC [Southwestern Athletic Conference] championship game, so we came to Birmingham, got our hotel suite and hung out in Birmingham,” Toni said.

“We were at the Riverchase Galleria [in Hoover] and ran into her parents and we hadn’t told them we got married yet, and Toni was trying to hide the ring from her mom… Her little sister, Nae, saw it first and put it out there,” Eddie said.

“Imagine your dad being asked if you could get married, but not knowing you got married, it was very interesting,” Toni said.

“Believe it or not, everybody pretended like it didn’t happen,” she added. “They didn’t acknowledge the ring, we didn’t tell them, and they didn’t ask us any questions; everybody played dumb the whole weekend. My sister was the only one like, ‘I see a ring, are we going to talk about this?’ It was about three weeks before we actually had a conversation with [family] about being married.”

Words of wisdom: “The two biggest things are sacrifice and patience,” Toni said. “You have to learn to give and take, it’s not going to always go your way and it’s not going to always be great. But you have to learn to stick it out, and in the end love wins. I was spoiled early on in the relationship, so that was an adjustment. Any marriage has its ups and downs . . . Faith is definitely a big part of what holds it together.”

Eddie said, “The best thing that could have happened to us was our move to Orlando, FL. The church we were attending had a very good marriage ministry and every week we would meet and discuss books that we read [on marriage]. There were like five or six other couples our same age and they really poured into us. Surrounding ourselves with like-minded people was important. All of our friends were married so we had a great support system going through the same things as us — new babies, new jobs, etc. [Also] Both of our parents were 10 hours away (in Birmingham), so there was no running home when things got rough, you had to stick it out and work it out.”

Toni, 46, is a Courtland, Ala. native and Courtland High School grad. She attended Auburn University, where she earned a bachelor’s degree in business administration and a second bachelor’s degree in human development and family studies. Toni worked as a social services case worker for 15 years before starting/running operations for their family-owned trucking company, Powell and Sons Hauling LLC, in Trussville.

Eddie, 43, is a Satsuma, Ala. [mobile county] native, and Satsuma High School grad. He attended Auburn University, where he earned a bachelor’s degree in electrical engineering and has worked as an electrical engineer for 20 years. Eddie is also an independent power systems consultant, and co owns/runs family trucking business, Powell and Sons Hauling LLC, in Trussville.