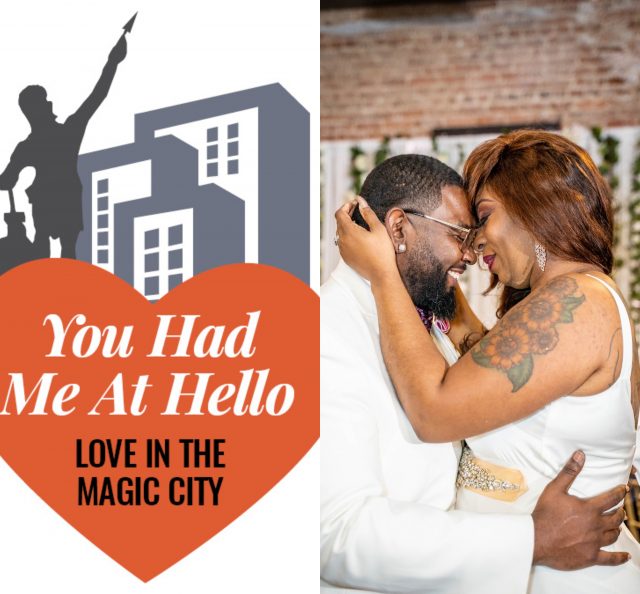 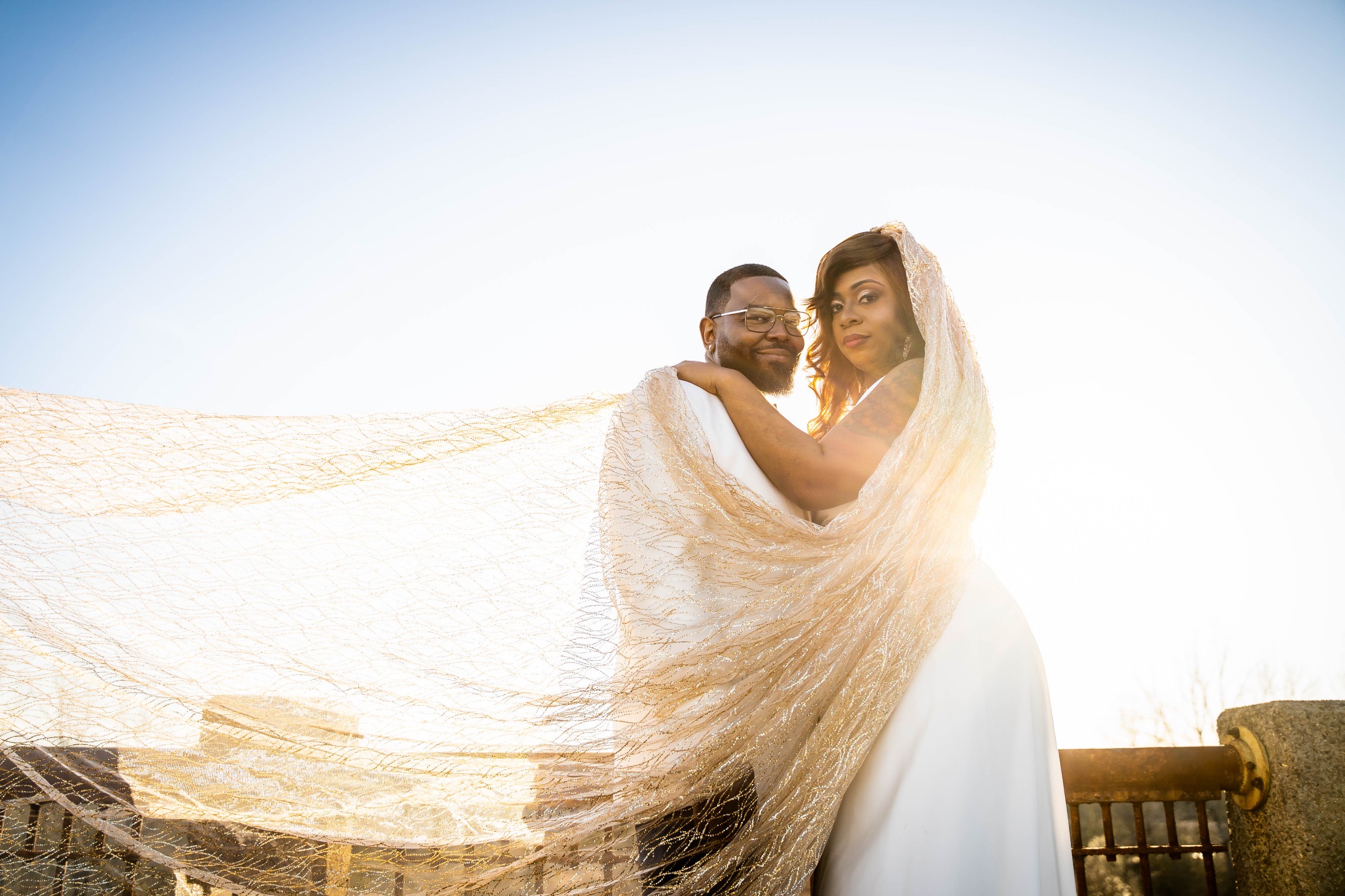 Jemeka was also previously married and knew what it was like when people asked questions about being divorced and took up for Demetrius “and he looked at me and his eyes said thank you. And from there we started conversing,” Jemeka said.

“My sister’s home is really the family home, and I was just relieved to be back in a place of peace,” Demetrius said. “So, I wasn’t looking to date anyone or get back into anything, but we were just sitting in the living room talking and celebrating my niece’s birthday. … What actually got my interest was [a moment during] a playful conversation we were having. She pretended to slap me and when her hand touched my hand there was a pause and things got weird. I knew she was special and that something special had just found me.”

Jemeka and Demetrius formed a friendship at his sister’s house before going on their first date spring of 2017.

First date: March 31, 2017, at Southern Kitchen in Uptown district.  “I had gotten to a point where I had stopped putting expectations on anything because of past relationship trauma, so I was going with the flow and living life. At that moment, I was just having dinner with a cool chick, I had no expectations. …,” Demetrius said.

“I could tell he was nervous because we were going somewhere outside of being at his sister’s house, but what made it special was that I asked him out on the date. The date was special because I offered him something [women] do not normally do. I admired him, I felt safe and comfortable with him, and my adoration grew that first night we were out alone outside of his family home… he was a gentleman, he opened doors and that was something I wasn’t used to,” Jemeka said.

The turn: “Demetrius asked me to be his girlfriend June 23, 2017… Now we were ‘out there’ to everybody. I knew he was the man for me because my spirit and my soul told me. It wasn’t my heart, it wasn’t lust, my spirit and my soul are the most important [measures] for me. We purchased our first home on Dec. 18, 2018, and that was both of our first home purchases, so we were growing together,” Jemeka said.

“Because of my upbringing in West End, I’m naturally suspicious of everybody, and I remember being totally at ease around her,” Demetrius said. “And in [June 2017] while we were at a hotel for a bowling tournament in Clarksville, Tenn. I asked her to be my girlfriend. She had a dry erase marker with her so I turned around and used it to write ‘will you be my girlfriend? check yes or no’ on the mirror behind the bed, and when she turned around and saw it she laughed and checked yes.”

The proposal:  Dec. 26, 2018, inside their new residence in Calera. “There wasn’t any furniture in the house yet, and I got the ring and put it in the center of the mantle above the fireplace and took a picture and sent it to her [as to say] ‘hey, I’m down at the new house’. And she came home while I was standing in the kitchen, and she saw the ring on the mantle and came to find me holding the ring asking me, ‘was this for real’, and I said ‘yes’. I took the ring out of her hand and proposed. I asked her if she would be my wife?” Demetrius said.

Jemeka remembers getting the picture and looking at the house “I wasn’t paying any attention to [the details in the photo],” she said. “…I had something I wanted to place on the mantle when I noticed the ring, and I just gasped … my heart and my soul were full, I was ecstatic. I get to marry the man God sent me. It was wonderful and I loved that it was simple and special and just us two. He did call my dad and ask him for my hand in marriage.”

The wedding: At The Goldstein and Cohen building in downtown Ensley, officiated by Rev. Dr. Geraldine Daniels of Southside CME Church. Their colors were fuchsia, navy, gold, and ivory.

Most memorable for the bride was that “it was the most special day of my life. I had never had a wedding [ceremony] before and neither did he and the most memorable moment was walking out to meet both of my dads, and when I looked down the aisle I locked eyes with my groom and he was crying and I started crying. Walking down to meet the man of my soul, which both of my fathers adored, was a memorable moment.”

Most memorable for the groom was a wardrobe mishap. “They gave me the wrong size shirt for my tux, so one of my groomsmen had to go from Ensley to Hoover to get another shirt for me,” Demetrius said. “And they had already started taking pictures, so I had to wear the too little shirt for the first pictures we took before the wedding, and that’s why I look real [buff] in some of the wedding pictures.”

The couple honeymooned on a cruise to the western Caribbean visiting Cozumel and Yucatan, Mexico. “It was both of our first cruises,” said Jemeka.

“Enjoy and appreciate the process. The way we have been conditioned and socialized is to have things ready-made, and the complete package once it [arrives],” Demetrius said. “I’ve enjoyed watching my spouse grow socially and professionally and as a woman. She’s gotten two degrees since I’ve met her… She’s getting to watch me as I explore and develop in manhood and what that means to me. Growing and maturing and experiencing life with one person is beautiful. When you can step back from the rigors of life and look and appreciate what you’ve built.”

Happily ever after: The couple have four children from Demetrius’s previous marriage Anthony, 15, Braylon, 12, Demetrius, 8, and Carmia, 6.

Demetrius, 36, is a West End native and Danville High School grad [Danville, Illinois], and will graduate in May 2022 from Miles College with a bachelor’s degree in history. He is the founder and director of Birmingham-based nonprofit, Point of Impact, and an ordained CME [Christian Methodist Episcopal] minister.

‘I was just ready to marry my best friend, the love of my life’ 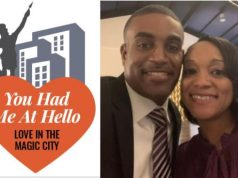 ‘He’s handsome, makes me secure, what more could I ask for in a man?’