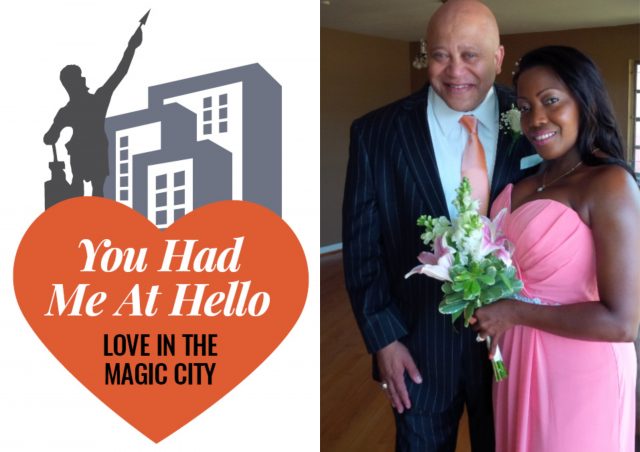 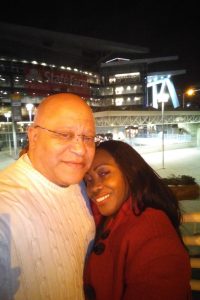 Met: In Brazil in 2000. Arthur was on a tour at the Opera House in downtown Manaus, Brazil, when he met Vera, who was there with another tour group.

“She caught my eye and I wanted to know who she was, so I walked up to her and started a conversation. We chatted for a while and exchanged information… [I] was at the end of my vacation, getting ready to come back home so we didn’t get a chance to go out, but we started writing to each other when I got back to Alabama,” Arthur said. “Back then we didn’t have social media, and we couldn’t talk on the phone long or it would run up a bill, so we wrote and I learned how to use email. Eventually, we stopped corresponding because I wasn’t heading back to Brazil anytime soon and had ended up meeting my daughter’s mother. For 13-14 years we hadn’t spoken and ended up reconnecting on Facebook in 2012.”

“I was there at the Opera House with a different tour guide, and at the time I was learning English, said Vera, whose primary language is Portuguese, “and he started talking to me and I saw it as a good opportunity to progress my English [so I exchanged information with him], that’s how [the relationship began]. In 2004, I moved to New Zealand to study at [Auckland University of Technology in Auckland] so I wasn’t living in Brazil anymore, but it was 2012 when I found him on Facebook. One day I just typed his name and he came right up and I sent him a message and he responded quickly. He knew exactly who I was, so we started talking as friends, and then eventually he [made plans to] come to New Zealand to visit me,” Vera said.

“By that time technology was much more advanced and we started communicating face to face via skype… In four months [January 2013] I was over in New Zealand making her acquaintance and reconnecting and went back again that August,” Arthur said.

First date: January 2013, in New Zealand at the Sky City Grand Hotel, at a restaurant called the Orbit, which is a sphere that rotates 360 degrees every hour.

“I remember getting off the flight and going to the hotel to immediately get ready for dinner. I was so excited I actually put my shoes on the wrong foot,” Arthur laughed. “When I got to the lobby area, I remember seeing her, her hair was very long, and she had on a pink chiffon dress that she had made. We hugged and kissed and chatted and went for dinner, the setting and atmosphere were perfect. I had a goofy, silly, look on my face, I couldn’t believe that I had traveled 8,000 miles, on a 26-hour flight to meet her.”

“I was very composed but he wasn’t,” she laughed. “It was very nice to see him after 13 years. But before the first real date, we were used to chatting every day, so we were used to each other, but it was different in the fact that we were in person and could hug and kiss,” Vera said.

The turn: “When I got back after the first trip to New Zealand I was love struck and trying to figure out how can I get back to her,” Arthur said. “I went back in August 2013 and we talked and I told her I would like for her to come to Birmingham and meet my family,” he said.

For Vera, things got serious after Arthur’s trip to Brazil for New Year’s Eve 2013.

“He came and met my mom, my brothers and sisters, and family. And from there I flew back to the states with him to meet his family and spent three months here, and then I went back to Brazil and decided to move [to the states] permanently in June 2014,” Vera said.

The proposal: June 2014, at Arthur’s house in College Hills.

“I didn’t propose, I presented her with a ring, but I didn’t get down on one knee, I just said ‘you’re going to be my wife, we ain’t going to be doing all this back and forth [traveling]. I’m going to marry you,’ and she had the biggest smile on her face,” Arthur recalled. “Then we went down to my parent’s house in College Hills, [in walking distance] and we told them and that’s when my mother gave me my grandfather’s wedding band. She said, ‘I think he would want you to have this, especially since you’re going to get married on his wedding anniversary.’ My grandparent’s anniversary is Aug. 5, 1938, and we were to be wed on Aug. 5, 2014, and my mother, the late Judge Helen Shores Lee [died July 2, 2018] married us.”

Arthur was also named after his grandfather, Civil Rights attorney Arthur Shores, who was considered Alabama’s “drum major for justice.”

“I was shocked because I was expecting him to get down on one knee like in the movies,” Vera laughed. “After all the back in forth [across the globe] I was expecting a real proposal, but the ring is absolutely beautiful.”

The wedding: At the Botanical Gardens in Birmingham, officiated by his mother, the late Judge Lee. Arthur wore a dark suit and a tie, and Vera wore a pink dress, and a veil and white gloves that she made.

‘We had an intimate wedding with just our closest friends and family,” Arthur said.

Most memorable for the bride was “marrying the love of my life in a beautiful place. I love nature, and the Botanical Garden is a beautiful place. After the vows, I remember his dad [Bob Lee] came to me and he gave me a hug and he said, ‘you are a part of this family now’, I was very happy. I would have been even happier if my family was able to be present, but the visas and travel are very complicated, so we have plans to renew our vows in Brazil so that my family can see it,” Vera said.

Most memorable for the groom was exchanging vows with his bride, “that was the highlight for me, I was finally marrying the love of my life. It was a special day for us, and it was also my grandparent’s 76th wedding anniversary,” Arthur said.

The couple honeymooned in New Orleans for five days. “Three weeks later we went to Florida, we love to get away on short [vacations] all over the South on the weekends and whenever we can,” Arthur said. “I love showing her the states and historical places…. We celebrated our seventh anniversary in Miami this past August.”

Words of wisdom: “Don’t smother each other. Trust is a big thing and so is communication. Allow for proper space and time for all things. I just enjoy sharing time and space with my wife, it’s nothing fancy, we just love and enjoy each other,” Arthur said.

“Communication is the key for everything. Understand each other and have mutual respect. Once you respect and communicate well everything is wonderful,” Vera said.

Happily ever after: The Lee’s have one daughter, Leah, 11, from Arthur’s previous marriage and are the parents of two adopted cats Gus, and Missy.

Vera is a Northeast Brazil native who came to the states in June 2014. She earned a bachelor’s degree in accounting and economics, a master’s degree in business administration, and a post-grad certificate in economics from Auckland University of Technology, in New Zealand. Vera works as an accountant for the University of Alabama at Birmingham [UAB], and speaks three languages fluently: Portuguese, English, and Italian.

Arthur, 56, is a Los Angeles, California native, who returned back to Birmingham with his mother and father in 1971. He is a Ramsay High School and Talladega College grad, where he earned a bachelor’s degree in English. Arthur attended Birmingham School of Law, where he obtained a Juris Doctorate and is a solo practitioner at Shores and Lee Law Firm. Arthur also served 10 years in the US Marine Corp. 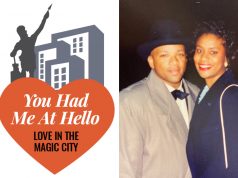