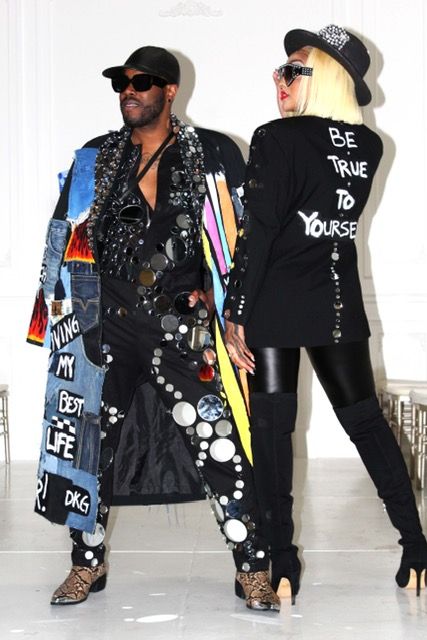 In fact, his fashion career began unknowingly when, as an only child with time on his hands, he tie-dyed a pair of jeans after deciding he was bored with how they looked. He posted his work on Facebook, and the response made him realize that he could become both a fashion designer and an entrepreneur.

As an only child with two working parents, “I was never bored,” said Grier—and he still isn’t.

Grier now brings youthful enthusiasm to all he does, including his successful clothing brand Splashed by DKG and Magic City Fashion Week (MCFW), one of Birmingham’s largest fashion events.

During last month’s MCFW, Grier was excited to announce what to expect for the show’s fourth season, which will take place next year, from March 31 through April 3.

“This fourth season is going to be rebranding basically to make sure [the show] looks like what the city looks like,” he announced at Asthetik Bham in downtown Birmingham one day before the Magic City Classic football game between in-state rivals Alabama Agricultural and Mechanical University (AAMU) and Alabama State University (ASU).

“And that’s not just Black and White,” he added. “That’s making sure we have … everybody represented here.”

That representation includes partners like the Birmingham Museum of Art; basic, a sustainable clothing brand located in Birmingham; and the Bib & Tucker Sew-Op in Avondale, where creatives work on their art, whether it is making quilts or sewing clothes.

The Importance of Fashion

Being an only child, Grier spent a lot of time alone, he said. “That had its challenges, but it made me creative. I had to entertain myself. I would use curtains and blankets to make dresses for celebrities in my mind,” he told createbirmingham.org.

Through a family member, Grier learned the importance of what fashion could mean. “I have a half-sister, and she lost her mom in high school. When it was time for her prom, she needed a dress. That’s something she would’ve shopped for with her mom, but I designed a dress for her 10th-, 11th-, and 12th-grade years,” Grier recalled in the createbirmingham.orginterview. “We got to know each other and bond on a new level. And I was able to watch her grow through her grief. She was named prom queen her senior year, and I got the chance to see this change, confidence, and happiness in her. That was a moment where it started to come together—how my gift and skill set can facilitate a connection in important moments. It’s more than just clothes.”

Grier launched Splashed by DKG in 2013 after receiving a HIV-positive diagnosis July of that same year. “It was a change of my entire existence,” he said. “You have two choices: you either live or you don’t.”

Not living was not an option for a number of reasons, Grier said, “because I have this amazing little 12-year-old now,” his son, Aedan.

The designer infused activism into his fashion three years after the launch of his brand.

“In 2016, one of my dear friends and [models] was murdered tragically,” he told Shoutout Atlanta. “In that moment, I felt the importance of using my platform to speak out about things I am passionate about. I began to use my art as activism.”

Grier organized community panel discussions and incorporated messaging into his garments to raise awareness about domestic violence, HIV, and LGBTQ rights. “Art has a powerful way of bringing people from all different walks of life together,” he said.

Love of “A Style Icon”

Grier, born in Birmingham, credits his grandmother with being “a style icon,” although he didn’t recognize it when he was younger. “She would wear different hats. She would wear different dresses, different prints, different textures, necklace on necklace, earring on earring, brooches, pendants—all of these things before I knew they had names,” he said. “And, you know, the different things that people looked at in fashion, … my grandmother was just that person. … She had the presence of a giant.”

Soon Grier’s “worldview” would expand. In middle school, his family moved from the city of Fairfield, which was largely Black, to Gardendale, a largely white community.

“The life I wanted seemed a little closer but still so far away in different ways,” he said. “My mom managed the Wendy’s in town, and when I wasn’t bullied for being gay, I was made fun of for my mom’s job and having to walk because I didn’t have a car. Ultimately, that strengthened my belief in who I am, and it instilled a sense of empathy in me.”

Though Grier’s college and professional pursuits mostly involved health care, that field wasn’t a good fit for him.

“I have worked [everywhere] from hospitals and emergency rooms to nonprofits, but nothing made me come alive like being creative,” said Grier, who moved to Atlanta, Georgia, but made his way back home to Birmingham and now splits time between both cities.

“Living in Atlanta was glamorous from the outside looking in. I was working a lot in and around the circles I thought symbolized success, but I was dying inside. I wanted to be near my family. … A lesson I’ve learned and a mantra I’ve adopted is “You can always come back,” he told createbirminhgam.org. “I also have [a 12-year-old son], Aedan, and my pursuits have to shift to accommodate whatever he’s got going on. That was a big factor in my decision to come back to Birmingham and reset—making sure I’m close to my family and his mother.”

Aedan being in virtual school during the COVID-19 pandemic was an eye-opener, said Grier, “and a mirror to how similar we learn and work. It’s created some powerful teaching moments for both of us, and it’s a lot like entrepreneurship. You have to set goals, keep yourself organized, and power yourself forward.”

The pandemic actually worked to Grier’s advantage: “The world slowed down, and I saw it as an opportunity to sharpen my craft—my sewing and photography skills. Aedan was home with me, so he helped. He wants to be an actor and take lessons, so I told him he had to earn the money by working. He certainly has his sights set high, and I love that.”

Grier reflects on the jobs that didn’t energize him, the new neighborhoods where he felt unwelcomed, the pandemic that sidelined him, the fashion industry types who were not receptive—all of which have helped to build his character and shape his career.

“That sense of ‘not belonging’ prepared me for adulthood and a career where people don’t always return your calls or you don’t find your way into the ‘cool kids club’ within your field,” he said. “I started MCFW exactly for that reason. I wanted to create opportunities for people who weren’t getting recognition across the wider scope of Birmingham’s creative scene. Black people, in particular, needed a platform to be seen, and MCFW could be a bridge that connected people through a shared interest in art and fashion.”

Perseverance has enabled Grier to be in the company of NBA stars, TV show executives, musician stylists, and others. He’s learned to navigate some of the more challenging aspects of the fashion industry, including accounting, keeping up with trends, and looking for growth and funding opportunities.

In June, Grier released his Reflections Collection 2021. And, nowadays, international superstars like singer-songwriter Prince Royce, wearing Splashed by DKG, show off the designer’s creations on their social media accounts.

Grier is humble about his growth, but he also notices how it compares to Birmingham’s recent rising.

“This has definitely evolved into something that was way bigger than I ever imagined and what I thought it could be. That’s the same way that I feel about the city,” he said.