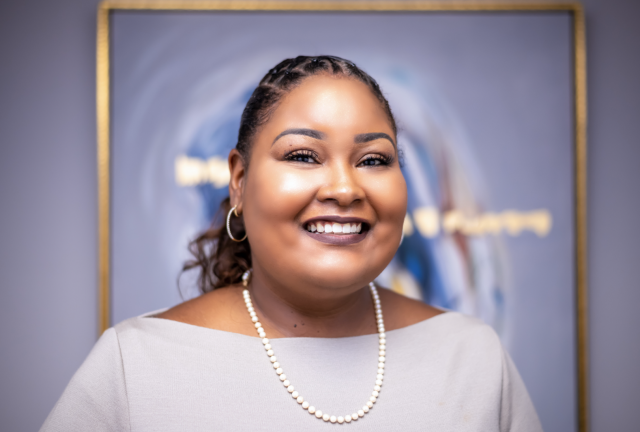 When most people think of a family business, a funeral home usually isn’t one of the first on the list, said Arlillian Kate  Bushelon, who has served as the director and manager of Bushelon Funeral Home in Birmingham for the past 15 years.

Being raised in the business made her much different than a lot of other children she grew up around.

“I went to Birmingham City Schools, and no one else got picked up in a hearse or limo, so that was very unique,” she said. “I thought it was an everyday thing, but being picked up in those service vehicles was a little embarrassing because the kids, of course, would pick on me about that. … Now I think it’s pretty dope that I was picked up in one.”

“I absolutely loved being [at the funeral home] with him when I was afforded the opportunity because I was a daddy’s girl,” she said. “[Almost] everyone in my family is a boy, so the boys were mostly [at the funeral home]. … When I was there, it was special because my dad would be one-on-one with me, teaching me the ins and outs. It was also kind of like our bonding time.”

Running a funeral home is about going the extra mile for families, Bushelon said.

“That’s what keeps me going. Being in this industry is honestly a calling. If you don’t have the heart to look out for other people you might not be successful in this business.”

Bushelon’s job goes beyond services at the funeral home which is located at 800 14th St. SW. During the peak of the COVID-19 pandemic last year, her love of comforting others in person was put to the test.

“It was hard,” she said. “I went from burying four to five people on Saturdays to seeing a significant increase [to about 10 to 15 services] on weekdays and weekends.”

As the pandemic progressed, Bushelon had to distance herself to protect employees, family, and others to avoid any possible spread of the virus. “Pulling back is hard, especially when you work in a business built around consoling the grief-stricken,” she said.

The pandemic had an impact on services, as well which the funeral home conducted every day of the week or whenever the family could arrange. Also, because only 10 people were allowed to attend each in-person service, Bushelon started holding virtual services via livestream on Facebook and created private groups for families, which is now an ongoing part of the funeral home’s offerings.

“That was something we offered at no charge, just to show that we care and want to connect the families,” she said. “They’ve actually kept those [Facebook] pages going. … They post memories, they post pictures, and it’s all done on Facebook.”

Bushelon also worked with local officials to stress the importance of wearing a mask, social distancing, and frequent hand washing and sanitizing to remain safe.

“I’ve had families come in and say they dropped their loved one off at the hospital, and the next time they saw them they were in a casket. You know, that’s gut-wrenching,” she said. “If I can make sure that I keep my family safe, I keep my mom safe, and I keep my community safe, I feel I can make a huge step in helping to eradicate the virus.”

Getting Into the Business

Bushelon, 36, is a Titusville native and George Washington Carver High School 2002 honors graduate. She continued her education at Clark Atlanta University (CAU), where she studied business administration with a concentration in marketing, with hopes of going into sports marketing.

“I lived directly down from the [now Mercedes-Benz Stadium in Atlanta, Georgia], at that point, so I was like, ‘That’s gonna be my job, with the [NFL] Falcons or something.’”

When Bushelon graduated from CAU, one of the first people she saw during the commencement ceremony was her dad, who had multiple sclerosis and was in a wheelchair.

“As I walked off the stage, the wheelchair accessible area was [nearby], and I walked over to him [to take a picture],” she recalled. “He said, ‘OK, it’s time for you to come home now.’

“I guess he knew he was getting sicker and needed someone to help him run the business,” she added. “So, I actually came back home and ended up being his caregiver. That’s how I really got into the funeral business—because [my father] was the boss. I grew an affinity for this business while taking care of him.”

Her father passed away in 2013 and “[running the business] just became the way I was supposed to help other people,” she said.

“People say you should tell God your plans and listen for him to laugh. God’s plan for me was to be here, and I wouldn’t change it for the world. … It’s just been blessing after blessing, helping families through the hardest time when no one else can.”

Pushed to be Great

To better prepare for the family business, Bushelon in 2011 earned an associate’s degree in mortuary science from Jefferson State Community College, while also earning a Master of Business Administration degree from Strayer University.

“Mortuary school is very similar to medical school,” she said. “Once you’ve done your prerequisites of English, science, and things of that nature, you go into the program and basically learn every aspect of the body—skin layers, veins, bones, and brain anatomy. … There’s a lot packed into [the four-month program].

“You also learn about funeral history and the origins of embalming. My instructors were all in the funeral business, and they pushed me to be great. What I loved about my class is that we had a common goal. … A lot of us had been in the industry for a while, so we would always bounce ideas off each other.”

Bushelon is always seeking ways to give back to her community, so she created West End Food Truck Park a year ago to help bring food to residents and workers who were confined to the neighborhood and unable to travel far for food—including the funeral home’s employees. She and her staff of 10 were often too busy to take breaks for lunch, and, other than a few fast-food joints, there was no place nearby to pick up food.

“During [the COVID-19 pandemic], we were slammed with work and noticed that food trucks were getting popular, so we said, ‘Why not? … Let’s bring [some food trucks] here every week and see how the community likes it.’”

The Park went from just one food truck to 12 and was so successful that it raised enough money to help students in the West End community.

“It’s just been the best response ever,” Bushelon said. “There’s been a snowball of blessings upon blessings to the point where we took the money we received from our vendors every week and gave it to Hemphill Elementary School, which was lacking furniture for its technology department. It was a blessing for them, and, hopefully, it will pay forward. … Maybe, you know, these kids will say, ‘A funeral home, of all places, cared about us and made sure we had the things we needed, so maybe we’ll pour back into our kids when we get older.’ The future just keeps getting brighter and brighter.”