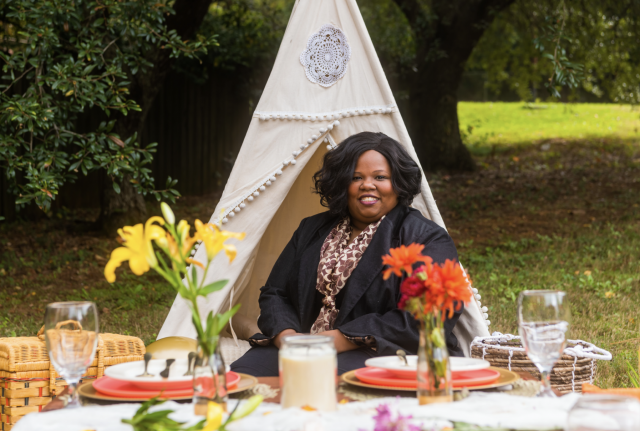 “I had an idea for doing my own food tours here in Birmingham,” she said. “My husband’s side of the family was having a family reunion, and [we] were thinking of neat things to do as a family. I knew that food tours were pretty popular at the time in places like Texas, Florida, and Tennessee, … so I decided, ‘Why not bring it to Birmingham?’”

Through her company, Coleman was able to bring “picnic experiences” to the Greater Birmingham region.

“Whether for date nights, birthdays, brunches, proposals, or even bridal showers and baby showers, MCFT was created for picnic experiences that are Instagram photo-op worthy,” she said. “People are big on scenery and food, and Birmingham just so happens to have both.”

“[I want] to use my business to highlight the great local restaurants in the Birmingham area, along with the awesome scenery we have here,” she added.

MCFT offers three food tour options: Magic City Hunt, a two-hour scavenger hunt that involves solving a combination of landmark and restaurant clues; Magic City Search, a walking tour competition during which teams race to different restaurants, solving clues to find each location; and the MCFT Showdown, which gives customers an opportunity to sample three variations of foods from local Birmingham restaurants (Tostada’s, Urban Cookhouse, Soho Standard, and Emily’s Poundcakes in the Homewood area are among the featured spots) and guess which restaurant made each dish.

Coleman, 39, describes her picnic experiences as “beautiful and customized with blankets, pillows, candles, and picnic themes that range from romantic candlelight dinners to brunches.”

“All customers have to do is book their preferred picnic date, theme, and location,” she said. “I do the rest by setting up the picnic and cleaning it up when they are done.”

Coleman kicked off her company with Facebook groups in 2016 to create a community of people who were interested in the tours. Shortly thereafter, Coleman became pregnant with her daughter Hanna. During the pregnancy, Coleman had complications similar to the ones she experienced with her daughter Nicole. Those complications put Coleman’s dream of highlighting the Magic City’s culinary scene on pause.

“During my pregnancy with my second daughter, Nicole, I was told that I had gestational diabetes,” she said. “I basically couldn’t eat carbs or any fast food, … [so] I pretty much ate peanut butter during that whole pregnancy.

“It wasn’t that bad, but then nine months later I became pregnant with Hanna, and I had swollen up so bad. … After delivering her, I was told that I had postpartum preeclampsia, [a rare condition that occurs when you have high blood pressure and excess protein in your urine soon after childbirth]. I couldn’t sleep in my bed for two years after that.”

In 2020, during the COVID-19 pandemic, Coleman’s father was dealing with health issues and moved into the family home in the Roebuck neighborhood. It was then that Coleman decided she wanted to stay home and take care of her father and children: “I’m definitely not going to go work for anybody because now I have these two little girls and I have elderly parents. I’m going to figure this out,” she said.

“When I started seeing all the restaurants close, it startled me because I knew that meant local business would take a hit and so would Birmingham,” she added. “I started thinking of what I could do to support local business, help Birmingham’s economy, and support my family.”

Coleman revisited the food tour idea she had in 2016. “I started doing virtual interviews with local restaurants in Birmingham to see if they would be interested in partnering with me for the tours,” she said. “I then started using TikTok and saw people doing these fancy picnics because that was something COVID-19-safe to do. I then realized that I could combine my original idea of the food tours and my new idea of the food picnics, and that’s where the idea for MCFT was born.”

Coleman is a native of the Hampton Roads area of Virginia. While growing up, her family moved around “about every four years” because her father was in the Navy. “I went to elementary school in Virginia, attended middle school in Tennessee, and then returned to Virginia for high school,” she said.

While she was a 16-year-old student at Salem Virginia High School in 1997, Coleman worked at Movie Time Video, a video store owned by a local couple. That experience sparked her ambitions for entrepreneurship.

“At that time and in my neighborhood that was a big deal because many people didn’t own their own businesses,” she said. “From that point forward, I knew that if they could start their own business, so could I.”

After graduating from high school in 1999, Coleman went to Old Dominion University in Norfolk, Virginia, where she earned a degree in business administration accounting in 2004. While she was in college she also met her husband, Larry, who is originally from Birmingham.

“I met him on a website that was called Yahoo Personal at the time,” she said. “My sister had just gotten a computer for college, and she introduced me to the website, which [said] was a good way to meet people and pass time. … When I started using the site… Eventually, [Larry] came along, and he was just different.”

“He was stationed in Norfolk Naval Base and said, ‘I just got here from Birmingham, I just finished boot camp with the Navy, and I need somebody to show me around Norfolk,’” Coleman recalled. “I could tell he was genuine and that he was being authentic. I met up with him and started showing him around, and we fell in love. … We got married about 10 months later, in 2002.”

Falling in Love with Birmingham

In 2005, the couple relocated to Birmingham after the birth of their first daughter, Olivia. They now live in the East Lake/Roebuck area and have three children: Olivia, 17, Nicole, 6, and Hanna, 4.

Coleman opened her consulting bookkeeping business, Coleman and Company, which she incorporated in 2008.

“I’ve always been big on businesses and seeing how I could help them grow and be the best they can be,” she said. “I did that for more than 16 years, in addition to [speaking] at colleges, conferences, and organizations about starting businesses, managing careers, and creating positive business relationships.”

During that time, her love for the Magic City grew, and she ran for Birmingham City Council in 2009.

“Birmingham has such a charming, close-knit vibe that was very different from my time spent up north in Virginia,” she said. “I really wanted to see how I could contribute more to the community, so I decided to run for the City Council District 2 seat. I didn’t win, but I got to meet a lot of people, which led me to getting even more involved in the community.”

Soon thereafter, Coleman did work as an organizer and served on several boards, including the McCoy Adult Day Care, SWEET Alabama, and Rise Against Hunger. She also volunteered with the YWCA USA, where she helped recruit more than 200 volunteers and formed volunteer teams to keep downtown Birmingham’s Railroad Park beautiful.

To learn more about Magic City Picnic Tours and schedule a tour or picnic, visit www.mcftpicnics.com.