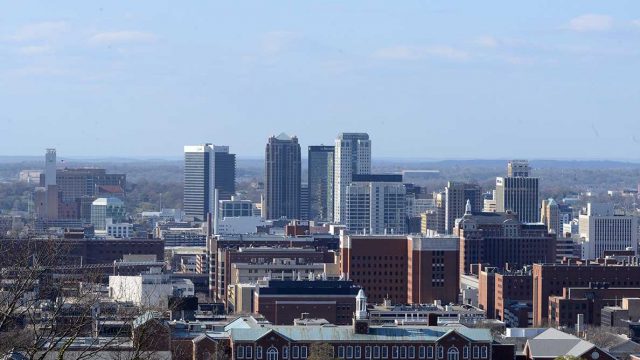 Birmingham Police have taken nearly 3,000 guns off the streets, but those are easily replaced by two or three more, and gun violence is a huge public health concern for the city, said Mayor Randall Woodfin in his 2022 State of the City Address on Tuesday before the Kiwanis Club of Birmingham.

The mayor highlighted a number of his achievements — growing the city economically, revitalizing neighborhoods, providing job and education opportunities for students – as he did in the leadup to his re-election to a second term in August.

But crime reduction remains one of the most talked about issues for many residents and the impact the gun violence is having on lives.

In 2021, Birmingham saw 132 murders, an increase of ten from 2020. Last weekend, a double homicide claimed the lives of 49-year-old Ed Franklin Harris and 16-year-old Yasmine Wright, who was killed by stray bullets from the shooting.

“Although we’ve been able to take over 2,700 guns off the streets in 2021, although we have created the Real Time Crime Center…[gun violence] is something that still hurts our community, hurts families and puts a stain on our growth, but this is not about numbers,” Woodfin said. “This is about the human life.”

“As gun violence continues to increase, what we found is for every gun we take off the street, it’s replaced easily by two or three,” Woodfin said, in a Q&A following the speech. “I have said this…it is easier to get a gun in Birmingham, Alabama than it is to get drugs. That’s a problem.”

Because so many homicides in Birmingham relate to inter-personal disputes and occur within private homes, Woodfin pointed to the variety of resources that people in poor domestic conditions can use.

“There are safe havens for you. There are housing options available. Our police have civilian personnel that can lend and extend themselves to you,” Woodfin said, also during the Q&A. “Our office helps as well as our court systems, where it doesn’t even have to be a criminal case in nature.”

In his speech, the mayor also said: