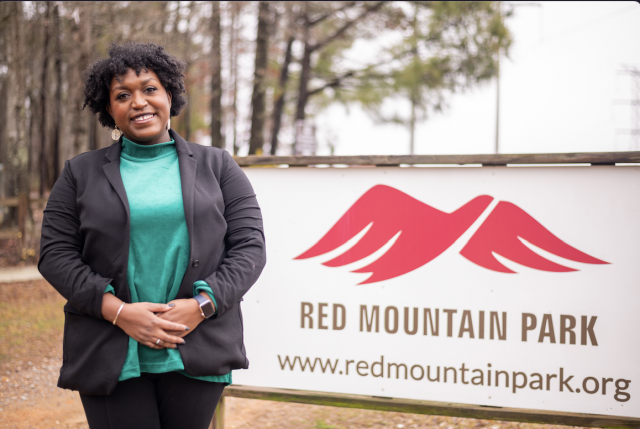 Leah Davis knew exactly what she wanted in a city when it was time to leave her native Tupelo, Mississippi. “I knew that I wanted to be in a city that demographically looked like me. . . [with a] Civil Rights history, a great urban area, particularly for young Black professionals,” said Davis, 23.

That made Birmingham a perfect fit.

Davis was recently named director of development for Red Mountain Park Foundation, a role that essentially makes her the head of fundraising for the foundation, which is responsible for the 1,500-acre park contained fully within Birmingham.

It should come as no surprise that Davis wanted a city with a Civil Rights history. She comes to the Magic City having been deeply involved in activism at the University of Mississippi (UM) in Oxford where she worked with a group of students on campus to have school officials relocate a statue of an armed Confederate soldier. Through 18 months of pushing the administration, the school decided to relocate the statue in June 2020.

The work of getting the statue removed from UM campus wasn’t something Davis set out to do when she enrolled at the university, but it taught her many lessons, she said.

“[The work] definitely taught me a lot about politics, policy space, how to deal with authority and just how to challenge institutions and how to make institutions more inclusive,” she said.

Beyond her fight to remove the statue, Davis was also involved with UM’s student government organization called the Associated Student Body (ASB), where she had served as the director of inclusion and cross-cultural engagement.

Shortly after her graduating in May 2020, Davis moved to Birmingham in August of that year for a job with the J. Mason Davis Leadership Society, which is an arm of the United Way of Central Alabama that focuses on Black donors.

Davis said she didn’t want to go to grad school right in the middle of the COVID-19 pandemic and wanted to start working immediately. “I knew that I wanted to be in a city that demographically that looked like me, and Birmingham, definitely with its history, the Civil Rights history, it definitely is a great urban area,” Davis said, “particularly for young Black professionals.”

Davis is the daughter of Willie and Carolyn, who are now co-pastors of the Church of Refuge and Restoration in rural Okolona, Mississippi. Davis said her parents both see kindness to others as the purpose of their lives.

“[My parents] just felt like it was a calling to love all people, all of God’s people, so I think I kind of took that and I think watching them how they never met a stranger and how they networked and stuff has definitely been beneficial as I’m a fundraiser,” she said

While Davis’ parents didn’t start the church in Okolona until 2015, her parents and Cross Pointe Ministries, the home church of Davis’ youth, were crucial in shaping the type of person she is.

“Really, I’ve never met a stranger. I love being friendly, and I do love the hospitality of the South in general, but I do think that my religious upbringing and growing in the church, being there morning, noon and night, had a lot to do with my personality and a lot to do with how I view the world and how I see community as well,” she said.

Davis has one sister, Sydni, who is a sophomore, majoring in African American studies, at UM. Though they are four years apart, Davis said people constantly ask if the two are twins. Beyond their similarity in appearance, Davis said she and her sister also share a love of singing, something they have done at churches and weddings together in the past.

Davis said she also played piano in church while she was still at Tupelo High School, and while she hasn’t been able to perform since her move to Birmingham, she wants to do it again.

“My professional career has just kind of taken precedence, trying to get acclimated to the community and stuff, but I would love to be in somebody’s church again singing because it’s just so it’s so therapeutic, and I’m very grateful for the gift that God has given me,” she said.

Davis first discovered her passion for fundraising during her senior year at the University of Mississippi (UM) in Oxford, when she started working with the school’s development office where UM’s former associate director of development Dr. Anthony Heaven served as a mentor.

“[Heaven] really just encouraged me and saw potential in how I was good with people, and I was always a very external, out-front student leader, and he was like, ‘I think you can do development,’” Davis recalled.

Davis said she has always had a “really big voice” on issues of race and inclusion, and UM, with its lack of diversity and its fraternity and sorority dominated culture, was a perfect setting to use her voice.

“[UM] was a really white and Greek campus, and I was neither of those. I was determined to make everybody feel welcomed, and ultimately, I knew that I wanted the kids who came after me, who didn’t come from a lot of money, had no interest in Greek life, who weren’t white, who didn’t have connected, influential families,” Davis said, “I wanted them to have a great experience and take advantage of every single opportunity.”

Davis is excited to work with the Red Mountain Park Foundation because of the park’s history, she said. The park exists on land formerly occupied by mine workers living in company towns owned by steel companies. The iron extracted from the mines was a resource that paved the way for the Birmingham that exists today.

“I was just blown away by the history that [is at Red Mountain Park] and how the history, and all the evidence points out, it was really crucial in the beginning of Birmingham’s inception, and that was just absolutely remarkable to me,” she said.

Beyond the historical aspects of the park, Davis said the landscape of the park inspires her.

“I just saw so much potential there,” Davis said, “up on the mountain and just felt really alive and just felt like I could have a great, direct impact on the ecosystem of Birmingham and really give back to the community through my job.”

The diversity of the park users, as well as the unique situation of the park between Lakeshore Parkway and the communities of West Birmingham, are other notable aspects of the park, Davis said. “Every time I’ve visited the parks…[people have told me] it’s one of the parks that really represents what Birmingham is.”

There are also few Black people in the world of development, even in a predominantly Black city like Birmingham.

“I think in a city with the demographics the way they are, I think it’s important to have representation in the field…and if you love to connect people, if you love people, and you love to find out what people’s passions are fundraising is a good opportunity,” she said.