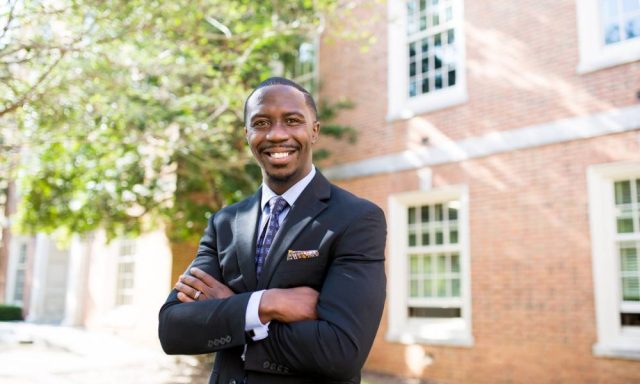 Talk to people who know and work with Isaac Cooper, and some common themes emerge. Those themes – a commitment to critical thinking, setting goals and working hard to achieve them, serving as a connector of people and opportunities – paint a picture of a person not only wise beyond his years, but committed to continual self-improvement and making lasting impacts on his community.

“Isaac is a person of tremendous character,” said Birmingham Mayor Randall Woodfin, recalling that he met Cooper in the early 2010s, when Woodfin was a lawyer for the city of Birmingham with ambitions of becoming its chief executive and Cooper a recent graduate of Samford University just beginning his professional career.

“We were young people who wanted to make a difference,” Woodfin continued. “Isaac had such a strong sense of direction and purpose. It was apparent to me that he was going to accomplish things, both personally and for the community.”

Building For The Future

Born in Florida to Jamaican immigrant parents, Cooper, 32, grew up in Fort Walton Beach with three older brothers and a younger sister. A gifted athlete, he participated in soccer, baseball, basketball, and track and field, and was a competitive weightlifter.

“I kept myself busy, playing sports or working,” Cooper recalled. “My siblings and I were the first generation here in the States, transitioning from a Third World country, so our parents did what they could with the resources they had. I wanted to make sure they didn’t have to concern themselves with me financially so they could address other priorities.”

Cooper’s older brother, Ashley, was an All-American defensive back at Mississippi State. Though Ashley’s career in the National Football League was cut short by injury, Cooper saw the opportunities football created and came to view that sport as the gateway to the life he wanted.

“I saw the potential life-changing money and connections it could provide, and that’s what I homed in on,” said Cooper. “I decided that if I wanted to change my situation, football was the vehicle. ”After a standout career as a high school defensive back, Cooper considered scholarship offers from multiple Football Bowl Subdivision (FBS) and Football Championship Subdivision (FCS) colleges before settling on Samford University. The deciding factor, he said, was Samford’s coach at the time, Pat Sullivan, the 1971 Heisman Trophy winner at Auburn. Cooper credits Sullivan, who died in 2019, as a key influence on his development both athletically and academically.

Like his brother before him, Cooper saw his dreams of an NFL career derailed by injuries. That reality set in after the final game of his senior year and placed him at “a critical moment” as he prepared to graduate in the spring of 2012.

“It broke my heart,” Cooper said. “I think it was my version of a midlife crisis, at the age of 22. I had always thought of myself as a football player. Now, I had to think about not only what I wanted to do, but about my whole identity. I had to deal with the idea that there’s an expiration date on being an athlete.”

Characteristically, Cooper worked – and thought – his way to a solution. His finance degree got him a job in Birmingham with a Fortune 100 company. But finding himself the only Black person in many meetings got him thinking about both the racial inequities in the financial industry and the lack of substantive education about finances available to many people of all colors.

“How do you equip people to control their own finances and build for their future?” Cooper asked. “The only people I saw getting help were people who already had money. I wanted to be able to build a financial business that wasn’t tied to commissions and quotas, that could really help people who need it.”

To meet that objective, Cooper started his own firm in 2016. With offices in historic downtown Ensley, IMC Financial Consulting is what he calls “the first vertically integrated financial services company in the country,” working with clients representing a full range of economic means and circumstances.

“Our model is not led by income, but by intention,” Cooper said. “We work with empathy for people who don’t have assets, while also helping those who do. We’re still a boutique firm, but we’re growing, and our clients are growing with us.”

Cooper’s values, skills and work ethic extend beyond growing his own company. That, too, has roots in the period of soul-searching that came with the end of his football career.

“As I was transitioning out of Samford,” Cooper recalled, “I started wondering, ‘Who are the Black guys who played at Samford who are now wearing suits? What is being done to keep them and other Black students engaged in the university?’”

Rather than just wondering, Cooper directed his questions to Andrew Westmoreland, then the president of Samford and now its president emeritus. With Westmoreland’s blessing and support, Cooper went on to establish the Samford Black Alumni Association, which today hosts more than a dozen events per year and awards scholarships to Black students at the university.

“Our friendship has only grown since,” said Westmoreland. “Isaac’s personality is such that people are drawn to him. He’s always focused on how things can be better and how his and others’ talents can be used to make good things happen. He thinks carefully and critically, asks hard questions, and does the homework necessary to inform good decisions.”

One of the Black Samford alumni Cooper reached out to was Corey Green. Vice president and community relationship manager for Regions, Green became involved with the alumni group and has continued to partner on activities with Cooper, a relationship he describes as “a blessing to me.”

“He’s a glue guy,” Green said. “I was not connected and giving back to Samford, and Isaac changed that. He has an authenticity, an ability to be himself in all situations, that translates to connecting people and getting things done. He’s a catalyst who adds value to everything he does and to Birmingham as a whole.”

Continuing to cultivate his love for football, Cooper joined with college and professional athletes of his acquaintance to start the Next Level summer football camp. In addition to developing football skills, the camp provides participants free breakfast and lunch, along with valuable life lessons. Next Level has grown from 60 kids at the first camp in Birmingham to more than 600 at locations across Alabama.

Most visibly, since October 2019, Cooper has been chairman of the board of the Birmingham Civil Rights Institute. At the time, the institute was in a time of transition, short on staff and experiencing financial difficulties that soon were compounded by the onset of the pandemic. Under Cooper’s leadership, the board was revitalized and the institute recommitted to its founding vision. Today, the focus is firmly on establishing an endowment to sustain the institute for the long term, part of an energetic push toward renewed relevance and vitality in the post-COVID world.

“Isaac stepped up,” declared Odessa Woolfolk, the institute’s founding board chair and now its chair emerita. “He created a sense of team, got the board organized, and recruited new, young members. He has a maturity far beyond his years, with the ability to set goals and achieve them. He’s a gifted young man with an incredible future.”

For Cooper, that future is built around his wife, Deesha, and their children – Irie, 3, Isla, 2, and a new arrival due in June. He’s committed to raising his young family in a community that is the best it can be, and to doing everything he can to contribute to that.

“Birmingham is where I want to be,” Cooper said. “The more I learn about this city, the more I love it. We have problems, some of them big. But I’m committed to helping solve those problems and to seeing Birmingham be everything it can be.”

Others continue to be inspired by Cooper’s drive and dedication, and to see great things ahead as he charts his path into the future.

“Isaac has a passion for serving,” Woodfin said. “He cares about the community and all of the people in it. I’m proud to be his friend, and Birmingham is fortunate to have him.”

“His runway is long,” said Samford’s Westmoreland. “His intellect and his emotional and spiritual strength drive his success. Isaac is going to be doing great things in Birmingham and Alabama for a long time to come.”