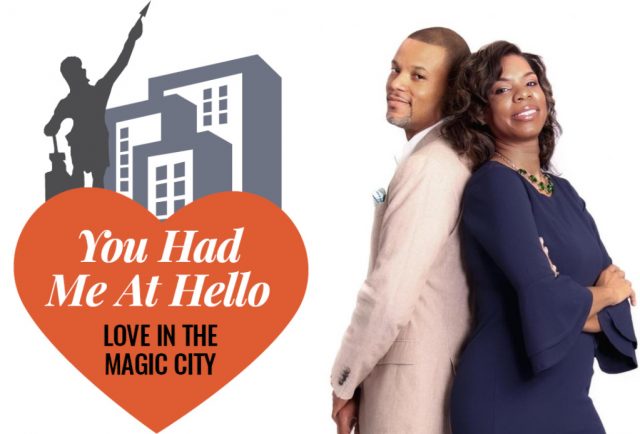 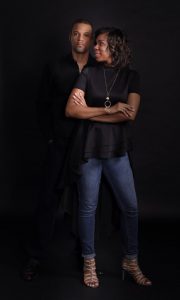 Met: At a funeral in Trussville, in October 2002. Zynique was 18, and DeVon was 21. “I was there with my grandmother to support a family member… I was looking around and DeVon caught my eye and I was thinking ‘Oh my gosh, he is so fine,’” Zynique recalled. “And my grandmother knew his dad, Ted, and told him ‘my granddaughter is having a fit over your son’ and DeVon is a twin . . . so his dad asked ‘which one’, and I said, ‘the darker of the two.’”

DeVon’s dad passed the message along. “We’re getting ready to leave the funeral and I’m outside starting my car up [to get the AC blowing] because it was hot, and my dad came up to me and said, ‘Mrs. Elnora’s granddaughter is interested in you’, and I said, ‘oh, really?’ Zynique was too shy to come up to me, so I went up to her and we had some small talk I said, ‘let me get your number and I called her a few hours later,’” DeVon said.

First date: The following Saturday at DeVon’s apartment in Center Point. DeVon picked Zynique up and went to a video store to rent a movie. They chose ‘Murder By The Numbers.’

“We just watched the movie and had good conversation, we were really just getting to know each other,” she said.

The turn: By November 2002, Zynique and DeVon were a pair.

“[In November] DeVon was meeting my dad, and introducing me to his parents,” Zynique said. “And we were traveling too, meeting each other’s family in different states [North Carolina and Ohio], it really moved quickly, we got serious with one another pretty fast.”

“Zynique was pretty, and I kinda liked that she liked me so much and was so shy around me,” DeVon said. “She didn’t get too comfortable too early, and I liked [that there was some mystery to her],” he added.

The proposal: On Martin Luther King Jr. Day 2004 at DeVon’s apartment in Center Point. “I worked for a bank at the time, and I was off for the holiday… so I decorated my apartment, which included balloons, rose petals, and candles that went from the front door to the dining room,” Devon remembered. “I had written notes that I tied to the balloons and each note was like a story that led to the next story, and at the end, the last note [asked] will you marry me?”

“After circling around and reading all the notes, by the time I got in the dining room he was sitting at the dining table with the ring in his hand,” Zynique said.  “And that’s when I got down on one knee and said will you marry me?,” DeVon added.

“I was super excited because we had already been discussing getting married, but it was really unexpected because I had been working all day. But when I got there and saw [the setup], and seeing how much time he put into it, it was really clever and amazing and I said ‘yes’,” Zynique said.

The wedding: At First Baptist Church of Moody officiated by Reverend Arthur Struggs and their colors were blush and mint green.

Most memorable for the bride was “saying our wedding vows [they made their own], getting to really hear his heart, how he felt, and what he really thought of me meant a lot; it was special,” Zynique said.

Most memorable for the groom was leaving their wedding as a married couple. “We had a vintage car that we left the wedding in, and I remember getting into that vintage car knowing that I am married now and being so young [24 at the time] I was thinking ‘what did I do, and what do I do now?’,” DeVon said. “I was thinking is this timing right? But once we got on the honeymoon it settled in. It was the initial shock of the wedding, and once I processed it I was good.”

They honeymooned in Orlando, FL. “My parents gifted us tickets to all the theme parks in the area, because we really love theme parks, so we got to park hop and visit Universal Studios, Disney World, and Busch Gardens,” Zynique said.

Words of wisdom: “Not making divorce an option makes you stick through the tough times because if you make it an option, you’ll choose that option when it gets tough,” DeVon said. “Become selfless, think of your spouse, do the things that make them happy because if both of you do the things that will make the other one happy things will be ok.”

Happily ever after: The Pates have two children, Gabrielle, 15, and Olivia-Rose, 9, and are members of Faith Community Fellowship in Trussville.

Zynique, 38, is a Trussville native, and Leeds High School grad. She attended Alabama Agricultural & Mechanical University, where she studied social work, and Fort Hays State University [Hays, Kansas], where she earned a bachelor’s degree in general studies with a concentration in organizational leadership. Zynique is a back office manager for real estate company Ashby and Graff Real Estate based out of Los Angeles, CA.

DeVon, 41, is a Center Point native, and Erwin High School [now Center Point High School] grad. He attended Jefferson State Community College [Center Point campus] where he earned an associate’s degree in accounting, Huntingdon College [based in Montgomery], where he earned a bachelor’s degree in business management, and Texas Agricultural & Mechanical University-Commerce [in Commerce, Texas, where he attended online] and obtained an executive master’s degree in business administration. DeVon is an advisor at a large financial institution based in Pittsburgh, PA.