Just when you think you’ve seen it all from the Honey Beez, Alabama State University’s (ASU’s) dance team featuring plus-size students, they’ll come up with an even more amazing way to wow a crowd, said Ruth Anna Williams, creative director for the Honey Beez.

And that goes for the 81st Magic City Classic in Birmingham, on Saturday, October 29, at Legion Field, where the football teams of ASU and longtime rival Alabama Agricultural and Mechanical University (AAMU) will battle for bragging rights in the state of Alabama.

Bianca Lucbelhomme, second-year captain of the Honey Beez, said she and her teammates circled the Classic on their calendars at the start of the season.

“There will be people everywhere you turn your head. Everybody always expects for us to top what we did the previous year, but that’s why I don’t feel like there’s any pressure because we’ve been preparing for it,” said Lucbelhomme, a senior projected to graduate in May 2023 with a bachelor’s degree in criminal justice.

Anayia Brown, Honey Beez co-captain, attended her first Magic City Classic last year: “I knew it was a big game, and there were so many people,” said the sophomore from Fort Lauderdale, Florida, who is majoring in biology/pre-health.

“Fans can expect something new and exciting [this year]. The Honey Beez never disappoint,” said Brown, adding that the group stands out because “they can do the same things regular size dancers can do.”

Williams added that the Honey Beez are special because there is no other group like them.

“I know people hear the saying ‘always imitated never duplicated’ all the time. … The reason Honey Beez can’t be duplicated is because each year I think of new ways and new avenues to push them to another trajectory,” the creative director said. “[They’re] always progressing, and that’s what makes them unique. They stand out because they’re always looking for other barriers to tear down, other ways to break the stigma of what plus-size women can do.”

The Honey Beez were formed in 2004, when ASU’s band director, Dr. James Oliver, had invited plus-size dancers to perform with the university’s Mighty Marching Hornets Band. 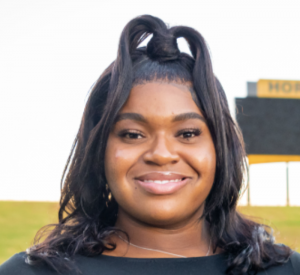 Growing up in Fort Lauderdale, Florida, Brown remembers wanting to become a cheerleader at the age of 5 and beginning to dance at around the age of 7 or 8. She attended Dillard High School, where she was a majorette.

“I did baton twirling, so my first time ever really ever dancing was when I came to ASU and became a member of the Honey Beez,” she said.

Asked about transition from being a majorette to auditioning with the Honey Beez, Brown, 19, replied, “I have always loved dancing. It makes I like I have an alter ego.”

Brown makes several contributions to the team and her dancing style is one, she said. “My style of dancing is very seductive [but in a good way], fierce and soft but hard at the same time.” 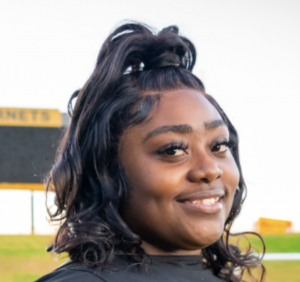 Lucbelhomme remembers the women in her family dancing at church, at home, and during functions attended by friends and family.

“When I was younger, I used to see my aunties get up and dance, and they would tell me to dance with them,” said Lucbelhomme, who grew up in Miami, Florida.

“I had to have rhythm growing up in their house. … If you didn’t have rhythm, they would say, ‘How are you Black?’” she laughed.

Lucbelhomme, 21, attended North Miami Senior High School, where she was a majorette and performed with the school’s dance company, Silver Passion Dance Academy. Prior to graduating in 2019, Lucbelhomme applied to different colleges, but she wanted to attend one that would allow her to dance.

“I applied to ASU because of the Honey Beez and my mentor and dance coach at the time, who had gone to ASU and been a member of the Stingettes dance team. She told me, ‘You’re going to ASU. That will be a perfect fit for you.’”

Lucbelhomme would not be denied. “I just went out there and did it,” she said. “I did what I had to do.”

In the fall of 2021, Lucbelhomme auditioned to be a captain of the Honey Beez. Asked what was going through her mind on the day of tryouts, she said, “To be honest, I knew I didn’t have the best flip, so I told myself I had to go in there and dance. I was in there dancing for my life. I left that routine on the floor.”

Asked why the Honey Beez can’t be mimicked, Lucbelhomme said, “We don’t do the same thing [twice]. We always [come up with] something to top whatever we have already done. The Honey Beez … always do something that’s at a higher level.”

Her advice to young women who plan to audition for the Honey Beez: “Don’t hold back, come in swinging full throttle. … I know it’s hard and easier said than done, but try not to second-guess yourself, keep a positive mindset, set your own tone, have fun, be yourself, and be memorable.”

As a captain, Lucbelhomme encourages every team member to be who they are and to bring their own style of dancing. On and off the field, she is responsible for making sure her team is confident and prepared for every performance.

“I try to make sure everybody is together. When I say ‘together,’ I mean mentally,” Lucbelhomme said. “It’s important to have great vibes and a great atmosphere on game day.”

More on the Classic

How AAMU-ASU Matchup in Game

AAMU Dancin’ Divas: “Prepare to Get Your Socks Knocked Off” | The Birmingham Times

The 81st annual Magic City Classic will be held Saturday, October 29, at Legion Field in Birmingham, AL. Kickoff is at 2:30 P.M.