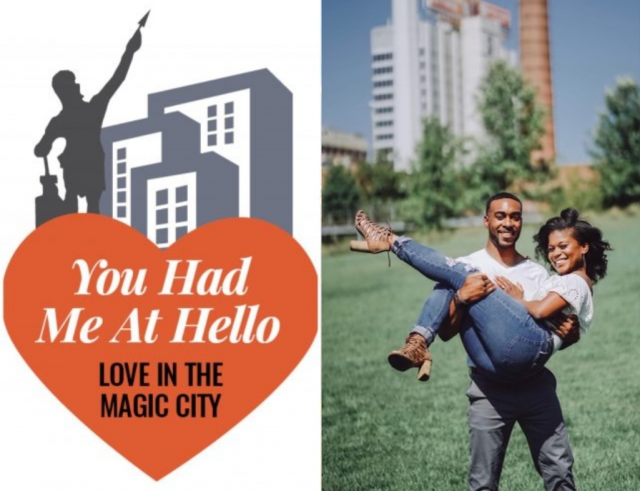 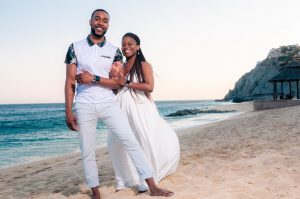 Met: 2005, in Montgomery at their best friend’s house. It began when Kelton at age 12 had a crush on the older Andria who was 15.

“I didn’t have a chance, Andria didn’t give me the time of day,” Kelton laughed, “[My crush] was probably mentioned to her, but she never looked my way, not once. But I told all of my friends if I ever get a real shot with [Andria], I’m done, I’m never dating anyone else, and that stood for years.”

Andria doesn’t recall young Kelton’s crush and says, “It may have been mentioned passively… but to my recollection, the first time I remember [hearing it] was my freshmen or sophomore year in college [at the University of Alabama at Birmingham (UAB)]. But when Kelton was about 18, and I was 21, I started hearing it more often.

“We [their hometown friend group] would all hang out during college, and when we came home [for holiday and school breaks] we’d all hang out at my best friend [Kenya’s] apartment… and [their friends] would tell me that before I would come in the room Kelton would start doing pushups and try to bulk up,” she laughed.

In 2012, Kelton and Andria made a late-night food run to get burgers for the group, and Kelton expressed his interest, but still, nothing came of it. Fast forward to 2016, after Andria lost her mother, and grandparents and she had been praying to God to feel His love for her through people in her life. In July 2017, she received a text from Kelton stating her prayer nearly word for word.

“It said, ‘Let me just cut to the chase, Andria, if you would give me one chance, I want to show God’s love for you through me’ and I was in disbelief. It was God’s confirmation telling me I need you to give this man a chance,” Andria said.

First date: July 2017, Kelton drove to Birmingham from Montgomery to visit Andria. The night was simple, Andria cooked, and they had wine, good conversation, listened to music, and watched movies.

“We were talking and having great conversation and then ‘If You Let Me’, by Sinead Harnett came on Pandora, and [Andria] said, ‘this is my song,’ and she started singing, and the vibe grew and we had our first kiss in that moment,” Kelton said.

“When the song came on we started listening to the [lyrics], and I leaned in for the kiss. He wasn’t going to try to kiss me, so I went for it,” Andria said.

The turn: “From the time that Kelton texted me [the words of my prayer] on July 6, 2017 I was locked in, I felt like God confirmed him, so I was just giving [Kelton] the chance [to do what he said],” Andria said.

“God had already confirmed it for me, it was [the culmination of] my 10-year plan,” Kelton said.

The proposal: June 2019, at Sinclair’s East, in Montgomery. “I ended up getting two of my best friends that I grew up with in church to help me plan the proposal. My mom and dad [helped] too. Dad was a principal, and he had [recently] won an award, and we used that as the [cause] for celebration… When we walked into Sinclair’s my mom and dad were sitting at a table already and [the staff pretended to seat them near Kelton’s parents] when another waitress walked up and said, ‘we seated you at the wrong table, we actually have another table in the back for you…,’” Kelton said.

The waitress took Andria to the back while Kelton pretended to get something from the car so that he could reenter the restaurant at another entrance and stand in the middle of the room when Andria walked down the stairs.

“And when Andria entered the room that queued the music; ‘Speechless’, by Dan and Shay and I was standing in the middle of the room staring at her and she started crying. We let the song play out for about 15 seconds, and when they cut the music I said my peace. I let her know how long I’d been waiting for this moment, how much I care about her, and that there was no doubt in my mind that she was supposed to be my wife. I got down on one knee and asked her to be my wife,” Kelton said.

“In his proposal, he basically paraphrased our story and said if you give me the chance, I want to give you the world for the rest of our lives,” Andria recalled. “I was surprised, I giggled, and then I cried because the words he said were beautiful. There were never any games, he was not playing and he’s been a man of his word from the time we started dating to now. But in that moment I was in awe of him and God, and I said ‘yes’, quick, fast and in a hurry,” Andria said.

The wedding: “We were a COVID wedding. The date was set for June 2020, and we realized the impact of the virus, so we didn’t have a wedding. We dropped [all of our wedding plans] and two days prior [to April 6, 2020] we just said, ‘let’s get married’ and we COVID eloped,” Andria said.

They were married at their home in Hoover, officiated by Kelton’s uncle, Pastor Kenneth Cash of New Beginnings Ministry in Montgomery, via ZOOM. Andria and Kelton both wore white blouses and black slacks.

“I had a wedding dress sitting right there in the closet, [but chose not to wear it],” Andria said.

In attendance were their immediate family members, and a few friends who came over to witness the nuptials and celebrate.

Most memorable for the bride was “doing our champagne toast to being Mr. and Mrs. Cash,” said Andria.

Most memorable for the groom was “taking the pictures afterward. We went outside on the patio and took pictures. It wasn’t traditional, but what made it so cool was that we made it our own,” Kelton said.

“COVID threw us for a loop, and we made it our own. We were [already homeowners] but decided to make it a rental property and used the money we would’ve used for the wedding to buy our new house,” Andria said.

Honeymoon: A staycation in Birmingham, at The Grand Bohemian Hotel and Resort in Mountain Brook. “And we made up for it in May 2022, when we went to Cabo, San Lucas,” Kelton said.

Words of wisdom: “Know who you are as a person. Make sure you and your partner have a solid foundation that matches because that’s what’s going to get you through obstacles. Our foundation is Christ, and Christ being the center of what we have, it guides us, keeps us on the right path, and loving each other,” Kelton said.

Andria said, “Marriage is not easy, but when you have a solid foundation and starting point and know what to go to when you get off track, that keeps you rooted and grounded, and on one accord. For us, Christ is the foundation, and if either one of us is off that guides and corrects us. Gentle and loving correction, but definitely being self-aware and accountable, that’s a huge factor in a relationship, and acknowledging and being willing to grow. If you’re not open to growth, that can hold back the whole relationship,” Andria said.

Happily ever after: The Cash’s are expecting their first child in April 2023, and are members of the Worship Center Christian Church.

Andria, 32, is a Montgomery native, Montgomery Catholic Preparatory High School grad, and attended UAB, where she earned a bachelor’s degree in science. She is a member of Delta Sigma Theta Inc. and works as a data analyst for the department of Veteran Affairs in Birmingham.

Kelton, 29, is a Montgomery native, a Brewbaker Technology Magnet High School grad [Montgomery], and attended South University [Montgomery] where he earned an associate’s degree in applied science. He works as a physical therapist assistant and operates an athletic skills and agility business ‘RYP [Recognize Your Power] Through Training’ that he facilitates at the Trussville Sports Complex and Hawkins Park Recreation in Roebuck.