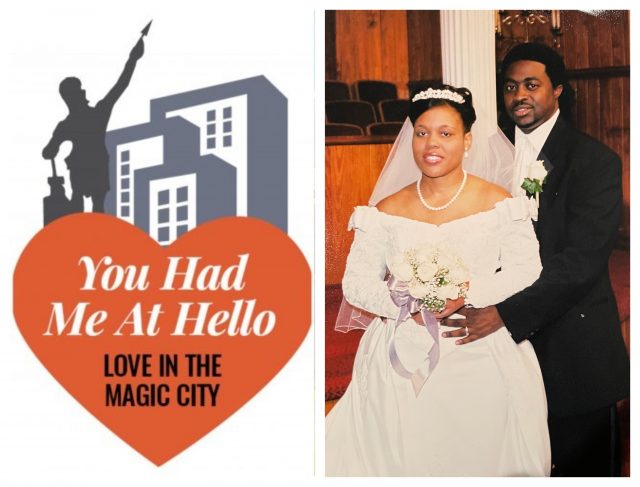 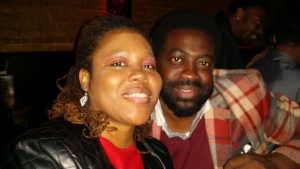 “We were inside the club and I was sitting with one of my girlfriends at the bar when I saw Kariba walk in. He was wearing white jeans and a purple and white polo, and I said, ‘I remember him’. We caught eyes and recognized each other from high school and he came over and talked to me,” Tracy recalled. “He was a gentleman, he bought me and my girlfriend a drink.”

“I thought she was sexy and all of the above,” said Kariba. “She had a certain look about her that I liked. I don’t remember what I said, I was a jokester back then and probably said something to make her laugh and offered her a drink.

The pair did not exchange numbers that night because the club closed early and Kariba saw Tracy to her car. The two crossed paths the following week at the same club because Tracy returned hoping to see Kariba and exchange numbers.

First date: Two weeks later at Applebee’s at Century Plaza mall. “I wasn’t feeling good so we left and went back to Kariba’s place so that we could hang out, but I was so [sick] I went to sleep and he woke me up two hours later and took me home,” Tracy recalled.

“I do know that she was a good sleeper, once she laid down it was over,” Kariba laughed. “…we hung out again two weeks later at her place. We just watched movies…”

The turn: Kariba left Birmingham in ‘95 to attend Devry University in Atlanta, Georgia and Tracy started travel nursing. The two kept in touch, but it wasn’t until 2001 when Tracy took a travel assignment in Atlanta, at Piedmont Hospital that the two reconnected and started dating again. A year later the two were in a serious committed relationship.

“Steve Harvey was doing this contest on the WB, they were giving away money and I was one of the [winners]. And when I went down to the studio to pick up my prize, they were interviewing all the [winners] and I must’ve mentioned that I was getting ready to propose and they asked me if I want to [propose] on the air as a part of the segment… Tracy was working a shift [at Piedmont Hospital], and I told her that she needed to be by a TV to turn it to WB68 at the time that they were gonna air the segment,” Kariba said.

Tracy was called to a patient’s room and she and a team of nurses were working to clean the patient before the segment aired.

“…I asked the patient if she minded turning on the TV, and as we were working, [the segment started] and I heard some of the winners come on and say, ‘I just won $1,000 on the WB’, and then Kariba popped up on the screen and called my whole name! He said, ‘Tracy Elaine Walker’ (and I was thinking, ‘no he didn’t call my full name on this TV’), will you marry me?’, and [everybody paused], and the patient said, ‘is that you?’, and I said, ‘yes ma’am.’ And she (the patient) said, ‘leave me alone, you need to leave my room right now and go call that man,” Tracy laughed.

“I left out and called him [acting casual as if I didn’t see the segment], and said ‘hey man, what you doing?’, and he said, ‘you didn’t watch the tv?’ And I got quiet, then I laughed and said, ‘yes, I saw it, yes I’ll marry you’. And we went out on a date the next night,” Tracy said.

The wedding: At St. John’s Baptist Church in Edgewater, officiated by Reverend Scott McPherson. Their colors were lavender and white.

Most memorable for the bride was waiting to walk down the aisle. “The wedding planner had me standing in the doorway, and everybody could see me, and I could see them, but it wasn’t time for me to walk yet. I remember [taking in that moment] and seeing Kariba standing there at the other end, and all of our family and friends, I was just overwhelmed with joy. It was like everybody was there for me, he was at the altar waiting for me, and it was my day,” Tracy said.

Most memorable for the groom was almost losing his composure at the sight of Tracy. “When she was coming down the aisle with her pops, I looked at her and I guess I was getting weak, so I had to turn my head,” Kariba said. “I couldn’t look at her coming down the aisle and I had to look at the pastor because I didn’t want to break down.”

The newlyweds honeymooned in Kauai, Hawaii for 7 days. “We enjoyed walking on the beach during the sunset. It was beautiful,” Tracy said.

Words of wisdom: “When we got together we said that we weren’t going to argue over finances, so we make sure we don’t argue over anything like that. She doesn’t crowd me, I don’t crowd her. We both still have our own time, and I think that’s one thing that a lot of couples don’t believe in. We hang out together, but we still need our own time too,” Kariba said.

“Communicate with each other, we try not to go to bed angry. Don’t hold grudges. If you’re mad about something talk it out, get it resolved and move on,” Tracy said. “You need to remain friends. We started out friends and ended up turning it into a romance. It’s important to be friends with your mate.”

Happily ever after: The Bushes are a blended family with three children, LaDarius, 26, Kariba Jr., 14, and London, 9.

Kariba, 49, is an East Thomas [Pratt City] native and attended Huffman High School. He attended the University of Alabama at Birmingham [UAB] where he studied electrical engineering and DeVry University in Atlanta where he earned a bachelor’s degree in electrical engineering technology, an MBA with a concentration in project management and finance from the Keller Graduate School of Management [Atlanta, GA] and works as a professional network engineer at AT&T in Birmingham, and is a member of Kappa Alpha Psi Fraternity Inc.