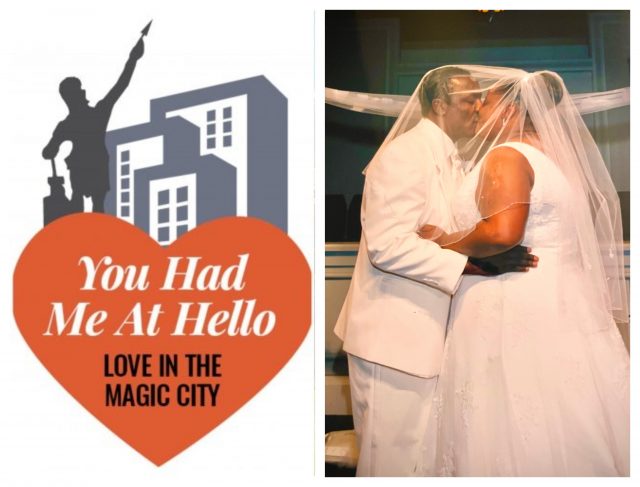 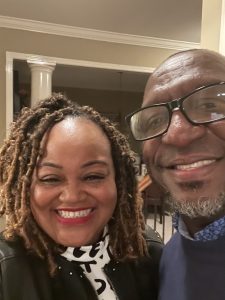 “His cousin Corey was my male best friend and he said, ‘I got somebody for you.’ (Tyrone and I) talked on the phone a lot and then we went from just talking on the phone to saying we are together before ever seeing each other … I was 15 and he was 16. He was my first boyfriend ever.”

Two months after their first phone conversation they met in person was at a Wenonah High School talent show “which she attended and she was in a group called Delicious,” remembered Tyrone.

“We were in a lot of different talent shows and that’s what we called ourselves,” said Mischa.

First date: The two didn’t have an actual “date” because “being young with no money we didn’t go on dates,” Tyrone said. But still “he would come to my house or I would go to his house when our families cooked dinner,” Mischa said. “I really wasn’t allowed to date a guy because my stepdad would say you don’t have a boyfriend. We didn’t get to go places by ourselves. My family was little stricter plus I was a girl.”

The two broke up in 1987 until 1999 when they ran across each other at Walmart in Fairfield and we talked for about four hours in the parking lot. Tyrone was married at the time and going through some personal issues.

“Mischa was always a person I could talk to. I didn’t want her to be my girlfriend I just wanted to talk to her. I told her a whole bunch of stuff… everything that was going on with me personally,” Tyrone said.

The turn: Tyrone remembers it like it was yesterday. “June 4, 2003, at 7:30 p.m. I ran into Mischa at Old Navy off Lakeshore Parkway in Homewood. I had just left New Pilgrim Baptist Church for Bible study and I was sitting at the traffic light. That’s where I learned that you have three minutes to make the decision that will change your life when God is telling you something. I was going to IHOP to get some dinner, but God told me to go to Old Navy. I went into Old Navy and I heard someone say ‘Tyrone Jones’ but she’ll tell you right now she never called my name. I hugged her and the first thing I said was ‘I’m not married no more’ because I know what type of woman she is. I told her that night we’re going to date and she said, ‘I’m dating somebody.’ I told her you can date them but I’m going to date you,” Tyrone said.

“I usually would go to Wednesday night church service, but I wasn’t feeling good, so I decided to go and return some items at Old Navy. As I was leaving out I could have sworn I heard somebody say ‘Mischa Jones’. We just looked at each other. He told me he was about to go and grab dinner and he invited me to IHOP on Lakeshore so that’s our first official date,” said Mischa.

“I knew that night I wanted to marry her. I had seen her years before, but it was something about that night. Some things happened within me when I heard God speak,” Tyrone said.

“It was something within the hug before I physically hugged her. That’s when I said something is going on here and I just knew. I’ve never been so sure in my life before.”

“We rode around the city until about midnight and I told him I had to work. He took me back to my car at Old Navy and he told me you’re going to be my wife. Then he tried to kiss me I was like, ‘wait a minute we just met.’ But I was very excited to see him, he was my first boyfriend ever and that night he was convinced [I would be his wife],” said Mischa.

The proposal: On Dec. 4, 2003 Tyrone proposed to Mischa at the Old Navy where they had met previously.

“I had the ring and I showed it to her mother and grandmother. At the time my daughter Mya was 3 years old so I told Mischa I needed to get Mya a coat so we went to Old Navy. I went to the store earlier that day and I told them I met my girlfriend here six months ago, and I want to propose to her in the same spot when I met her. When we walked in they were so excited they even cut off the music,” Tyrone said.

Mischa said, “It was a good surprise for me because he had been telling me about the coat, but he also told me, ‘I can’t afford to get you a ring so I don’t want to you to be looking for a ring.’ I said, ‘ok I’m good I’m not looking for a ring.’ We arrive to Old Navy and I began to start looking for coats. All of a sudden the Christmas music stopped and they made an announcement that a couple was in there and then they said, ‘go ahead’.. then he turned to me and everybody was staring at us. I was crying but most importantly shocked,” Mischa said.

The wedding: At More Than Conquerors Faith Church located on the west side of Birmingham, officiated by Assistant Pastor Don Thompson. Their colors were cream, gold and taupe.

Most memorable for the bride was that “we were getting married at eight o’clock in the morning and we had a breakfast brunch for our reception so people were really excited about that when they came . . . the concept behind it was ‘Morning Glory’. When we get to the altar, we had someone to take our shoes off before we stepped up the podium with the pastor so it was a lot of symbolism… we had the king’s chair with the drape for the Lord and we presented our lives to Him not just to each other.

Most memorable for the groom was picking up his tux: “I went to get my tux that Friday and they didn’t have it. They had to put my tux on a bus from Montgomery and I had to pick it up at one in the morning. I didn’t understand why she wanted to get married eight o’clock in the morning until the day of, then I understood it.”

The couple had a two-week honeymoon: One week in Las Vegas, Nevada and a one week cruise to Cozumel, Belize and Key West, Florida.

Words of wisdom: Mischa said, “Trust God. When I was younger, I never would have thought I would get married to him. He was my first love but, I thought after we broke up and he had gotten married I said, ‘if God allows me to get married, it won’t be [Tyrone]. So I feel like you have to trust God and he knows the perfect time. We’ve been married 18 years now and I thought getting married at 35 was late but with God he is going to redeem the time.”

Tyrone said, “I would tell the guys to be sure of themselves. Being faithful starts before saying ‘I do.’ It doesn’t take six months to know what you want especially when you’re looking for it. If a guy knows he really wants to be married don’t string a person along. Just be faithful and trust God. I suggest you date yourself first. It’s bad when you know more about the woman than you know about yourself.”

They also keep Amos 3:3 at the forefront of their marriage. “Can two walk together, except they be agreed?” [KJV)

Happily ever after: The Jones have three children. Deyon 40, Tyneisha 34, and Maya 22.

Tyrone is from Birmingham, AL. He graduated from West End High School in 1987. He currently has roofing company call ‘New Life Roofing.’

Mischa is from Birmingham. She graduated from Wenonah High school in 1987. She attended Talladega College and graduated in 1991 where she pledged Delta Sigma Theta Sorority Inc. and majored in biology. She went to the University of Alabama at Birmingham where she obtained a degree in occupational therapy and has been working at the University of Alabama at Birmingham for 16 years as an occupational therapist.