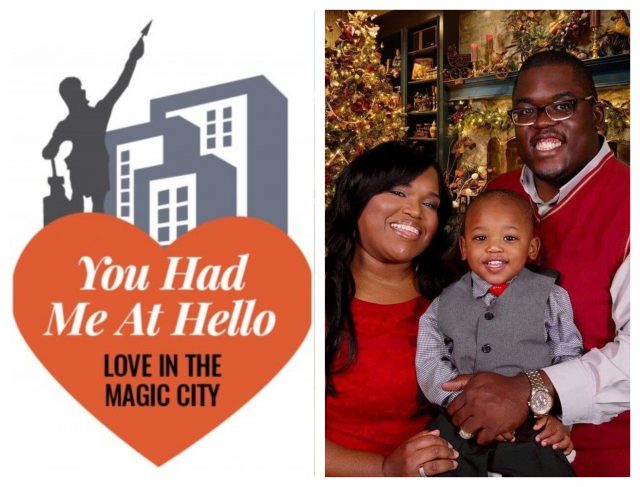 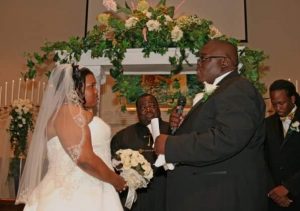 Met: June 3, 2008, at Phillips Temple AOH [Apostolic Overcoming Holy] Church of God, in Mobile, Ala., during their organization’s Pentecost Meeting.

“I saw him first, I was coming out of the sanctuary and he was getting out of the church van and he had on a bow tie that night, and I said ‘you’re looking kinda sharp there’ and he said, ‘thank you… don’t you have something for me?’ And I didn’t know what he was talking about, and he said, ‘[it’s] something you gotta write down and bring to me.’ And I got it then, but I just let it go,” Carolyn said.

She later concluded he was asking for her phone number.

“That Friday we saw each other again [at the convention, at the same church], and he asked me if I had something for him yet?”

He said, “There were a lot of people around and I didn’t want people to link us together before I even had a chance to take her on a date, so I just gave her my card,” Leonard said. “I wanted to talk to her again that night before leaving church [but I didn’t get to], so I just hoped that she would call.”

She did and they set a date.

First date: Father’s Day 2008. Carolyn drove to Montgomery from Birmingham, and they went to Applebee’s on Atlanta Highway [Montgomery] and to the movies at the Carmike Theater at Eastdale Mall in Montgomery to see the “Hulk”.

“She came to my apartment and she got in the car and we went on the date. She’s so pretty and nice to look at. I enjoyed being able to look at her while we talked because we had been staying on the phone until 1 a.m., so being able to talk face-to-face was nice,” Leonard recalled. “This is 2008, before video calls and FaceTime,” he laughed.

“I was very comfortable, it felt like I had known him for years and like I was talking to someone I had known for a long time. It was good energy and I felt safe. He was really a gentleman, he made sure we had a good spot in the theater and we had a good time. He didn’t try to make his move at the movies, he was a perfect gentleman,” Carolyn said.

They ended their night watching a concert on DVD at Leonard’s place. ‘…it was [gospel singer] Rickey Dillard Live in Toronto,” said, Leonard.

The turn: July 2008. “Carolyn knocked me off my feet. We were so equally yoked from being a part of the same church organization, and the Lord was telling me she was the one,” Leonard said. “I had a consultation with my dad and told him she was the one, and he said, ‘if you really like this girl, please don’t lie to her about anything, and if you’re thinking about proposing to this girl, make sure you bring her to see me first.’ So, I was like, ‘what you doing this weekend Carolyn, We gotta go to [Macon] Georgia to see my dad’,” Leonard laughed.

“I had to do a little research on him. I had seen him around because he was our church’s photographer. … I asked my best friend about him, and she spoke highly of him, her grandmother spoke highly of him and that carried a lot of weight. They told me about his family, what he did for a living and that he was a business owner [he had a photography studio called D- Image at Eastdale Mall].”

But she saw first-hand how much he loved her.

“We would go visit each other on the weekends [Carolyn lived in Birmingham and Leonard lived in Montgomery] and one day we were sitting on the couch and a woman called him and he nipped it in the bud right then, he told her there was no need for her to be calling him anymore because he was seeing someone. That showed me we were exclusive right there,” Carolyn said. “That was in July [2008] before we went to Macon.”

The proposal: August 2008, at The Botanical Gardens in Mountain Brook. “I told Carolyn that I wanted to do a photoshoot at the Botanical Gardens, and I got there before her and [hid] some flowers… and when she got there I went and met her in the parking lot and took her to the spot I wanted to propose and sat her down on a bench. I got the flowers from behind the tree and gave them to her and got down on one knee and proposed,” Leonard said. “I told her how much I loved her and said would you be my wife? It was just us, it was in the evening. And after she said, ‘yes’, I took photos of her wearing her ring.”

“He had me sit down and he pulls out this vase with some pretty red roses, and then he got on one knee and I was like ‘oh my god, it’s going down’. He said the date we met, told me how much he loved me, and asked me to be his wife. I was so elated I was speechless, but I got my ‘yes’ out. Leonard was my dream come true, he was what I needed in my life and I call him my hero because he really saved me from a bad life that I could’ve had and I was so thankful to God that Leonard asked me to be his wife,” Carolyn said.

The wedding: In Ensley at Greater New Antioch Baptist Church, officiated by Bishop Gregory Cannon. Their colors were green and gold.

Most memorable for the bride was their first dance. “The song that was playing was ‘For You’, by Kenny Lattimore and everything was brand new and we were starting this new life together not knowing what to expect, but I felt safe and like we could conquer the world, just me and him. I’ve had some good examples of what marriage looks like from my parents, I know there is sunshine and rainbows, but there are difficult times too and I couldn’t see myself going through life without him,” Carolyn said.

Most memorable for the groom was taking in the moment as his bride walk down the aisle. “All the planning, picking the venue, the wedding colors, and just seeing it all come together. She was so pretty, it was like a worship service too. I was crying and thanking the Lord for who He blessed me with,” Leonard said. “It was overwhelming when that door cracked and she started walking toward me, I cried. I didn’t have a praise break,” he laughed, “she was just a sight to see. It was like an angel was walking down the aisle, and I thanked the Lord for giving me my dream girl.”

They honeymooned in Las Vegas. “The honeymoon gave me a realistic view of being a married couple,” Carolyn said. “My husband is allergic to peanuts and we ate at a buffet and he got some shrimp that had peanuts in it and his throat started closing up, his eyes got big and puffy and I was panicking and trying to see what to do and I thought [of] Benadryl. We found a cart that had Benadryl and sat down and tried to get it into his system. And it showed me how you have to be prepared as a wife and know these kinds of things about your spouse.”

Words of wisdom: “They say ‘happy wife, happy life’, but there’s another saying ‘happy spouse, happy house’. And that means we both have to compromise on things. I’m a sports guy and I look at me and Carolyn as a team, and with whatever goals we have, as long as it’s not going to affect the team [negatively] it’s all good. You have to figure out what each other’s strong points and weak points are and operate as a team,” Leonard said.

Carolyn said, “To keep your marriage you have to have a desire to want to stay married because difficult times will come. But also, let your partner know what your non-negotiables are. [Tell them] what you’re not going to tolerate and what your breaking point is, because if they don’t know they can easily violate. Being respectful and honest towards one another, and being able to communicate during those tough conversations [is key].”

Happily ever after: The Bells are a blended family with two children: Jordan, 17, from his previous relationship and Leonard III, 10, from their union.

Carolyn, 41, is a North Birmingham native, a Ramsay High School grad, and is currently attending Faulkner University online [Montgomery Ala.], where she is majoring in psychology. She is a stay-at-home mom and enjoys raising her family.

Leonard, 42, is a West Mobile native, a Davidson High School [West Mobile] grad, and attended A Touch of Love Theological Institute [Montgomery, Ala.], where he earned a Doctrine in Philosophy of Theology. Leonard works in property and hospitality management, and pastors Christian Community Fellowship AOH [Apostolic Overcoming Holy] Church of God in Adamsville.