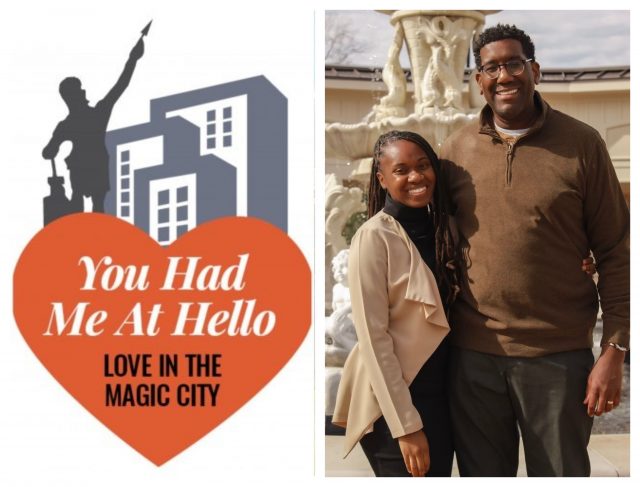 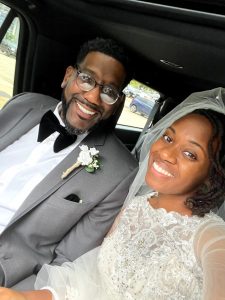 Met: July 2019, in Biloxi Mississippi at a church conference.

“I noticed Erica on social media and reached out to her. She accepted my friend request but there was no communication. I DM’d [direct messaged] her twice and she did not respond,” Reginald said. “I kept following her on social media and saw her doing a couple of things, and I noticed that she was going to be in Biloxi, Miss., for this [church] conference that I was going to be attending. Gulfport is right next to Biloxi so I reached out to in hopes that she’d respond, and said ‘hey, you’re in my hometown, and maybe we can meet’, and she responded.  Reginald was the National Youth Evangelist in the AOH Church of God organization and had hoped his status would impress Erica.

“Everyone knew who I was, and I was escorted to the front, so I [felt like the big man on campus] … but it turns out she didn’t care anything about that,” he laughed. “After the service, I could not find her. I looked and I looked and I went back to my car defeated, and something said reach out to her [on social media] again and she responded [to my DM] right away.  I went over to her [she was still on the church grounds] and she was surrounded by her girlfriends and some of the other saints and we talked for about five minutes. We just talked, we didn’t go out or anything.”

A week later they were both in South Carolina for another church event and Reginald met her parents. Although he’d hoped to spend some time with Erica, the opportunity never came.

“We kept in touch over social media for a couple of months, and eventually exchanged numbers and began texting and communicating, but we still didn’t have anything established,” Reginald said.

First date: In November 2019, Erica invited Reginald to New Orleans to hang out with her and her family. “Her father grilled me for a bit, it was very investigative,” Reginald laughed.

“We were down in the French Quarter and we just walked and talked. I was with my family so I felt pretty comfortable,” Erica said. “That was close to the time when I recognized that there was definitely a connection, and there was chemistry. After we left, I felt there was potential worth looking into.”

The turn: In March 2020, Reginald visited Erica in Washington, DC to attend her birthday party and over the course of that year, Reginald and Erica met up in different cities for ‘social, group hangouts’, and he visited her in Washington, DC a number of times while she was in grad school at Howard University.

Travel was limited but after COVID restrictions let up he visited her and her family in Vacaville CA and she visited him and his family in Gulfport MS.

“Once our parents met, we were confident to move forward and start talking about marriage,” said Erica.

The proposal: February 2021, in Vacaville, CA, during a visit to Erica’s hometown. Reginald proposed during a photo shoot in the Vacaville Hills [a mountain scape].

“I got everyone on board, including the photographer. I had already talked to her parents and asked them for her hand in marriage, and I had my mom and my sister come out on the visit with me as well,” Reginald said. “And while Erica was taking single shots, I got behind her with a sign saying ‘Will You Marry Me? and when she looked back at the shots with the photographer, that’s when she realized I had proposed to her.  After she looked at them, she looked at me and said, ‘are you serious?’ I said, ‘yes’, got down on one knee and pulled the ring out, and proposed.”

“I was initially in shock, when he asked me to marry him, I forgot to say, ‘yes’ because I was so excited,” Erica said.

The wedding: Baton Rouge, Louisiana, at Full Gospel United Pentecostal Church, officiated by Erica’s college pastor, Bishop, Dr. Charles Rodgers [from Huntsville, Ala.], and their colors were sage and ivory.

Most memorable for the bride was “…when we drove off [in a Ford Expedition], it felt like we were in a secret service vehicle with the black tinted windows,” Erica laughed. “It kind of represented the transition from singleness to being married. I was still emotionally attached to my parents as a single person, so it was monumental to watch my parents stand there and bid us farewell as I drove away with my new husband. We had a lot of support that day, and I felt like we accomplished what we wanted. The excitement level was so high I don’t even remember the ride back. But [at some point] we did realize we were hungry and ordered pizza, and then went to Walmart and got ice cream. It was the most enjoyable part of the day,” Erica said.

Most memorable for the groom was seeing his bride for the first time. “The moment I saw her when they opened the door and Erica was standing there with her father. There was great anticipation. The entire wedding seemed to be going in fast motion, and that moment stood still and was unbelievable,” Reginald said.

The couple honeymooned in Boston, Massachusetts.

“We got COVID during our honeymoon. The first two days we got to enjoy, and came down with it about midway through, on day three. We stayed in the hotel and got medicine and juice from the CVS next door,” Erica recalled.

Words of wisdom: “Don’t put so much emphasis on things that could go wrong in the relationship. It causes friction and unnecessary delays in getting to know each other. I’m a realist, so I try to look at things that way, but there’s a thin line between realism and pessimism. Try to remain positive and prayerful,” Erica said.

“Always communicate, always listen closely to what is being said and to what the other is saying. Communication is our key, and we had to rely on that with the way things were [long distance]. We both lead pretty demanding lives, and we navigated through all of that and kept love where it was supposed to be. Communication was key, then, and even now,” Reginald said.

Happily ever after: The Middleton’s attend The Sanctuary Apostolic Pentecostal Church in Bessemer.

Reginald, 43, is a Gulfport, Miss. native, and Harrison Central High School grad. He attended the University of Southern Mississippi where he earned a bachelor’s degree in psychology and William Kerry University [Hattiesburg, MS] where he got his master’s degree in Education and EDs [Educational Specialist] in Educational Leadership. Reginald works for Alabaster City Schools as a history teacher and administrative assistant.