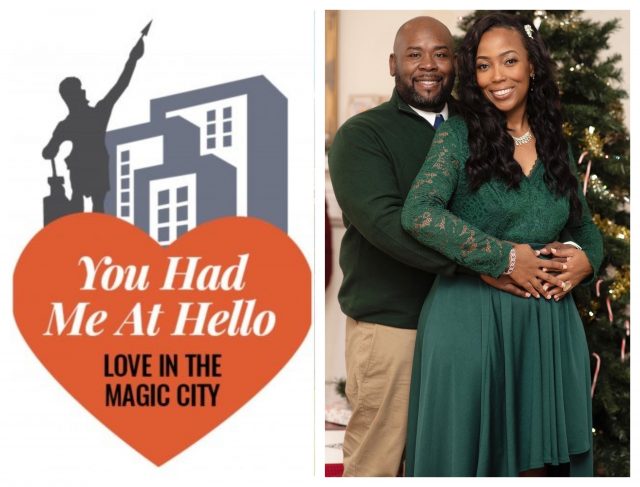 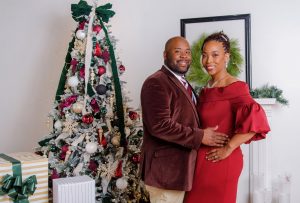 Met: November 2006, at Faith Apostolic Church in Birmingham. “One night during one of our church councils I saw him from across the sanctuary and he was staring at me, and as our eyes met we started walking towards each other and introduced ourselves,” Jimel remembered. “And from there he would always ask to walk me to my car, and one night he finally asked me for my phone number.”

“I’ve been a member of my church since I was born, and my wife started going there in 2006, and when she became a member she caught my eye,” Mario said. “I had actually had a dream about her, and in that dream, she was my wife and a Sunday school teacher, and [in reality] she was working with the youth department so it was like we were already married and working in the church together… It wasn’t just me who was interested, though, she was interested too.”

First date: December 2006, at Applebee’s in Bessemer on Academy drive. “We were just getting to know each other, asking those basic introductory questions, when you ask about each other’s family and jobs. We were doing the skinning and grinning and googly eyes at each other,” Jimel laughed. “He was very good-looking and polite, and I was happy to find somebody that I had a lot of similarities with.”

“I was happy I’d found a young lady that was so beautiful inside and out, and we grew up the same way in a holiness church, our mothers were the same, and that was a big thing for me; it felt like God put us together,” Mario said. “And, I was so intrigued by [Jimel’s] looks, and her eyes, I was just happy she was sitting in front of me and liked me.”

The turn: February 2007. “It got serious pretty quickly, we both knew what we wanted and that we wanted to be married and didn’t want to have a long courtship,” Jimel said. “When God gave me Mario, He gave me the qualities in a man that I prayed for. Mario loves me, believes in me, and encourages me. I could have never become who I am without his love and support. We realized we had found the one within each other.”

“I didn’t waste any time. I knew I found the one so I let her know early she was the one I wanted to spend the rest of my life with. I had had my choices, she had had hers and we knew that we had chosen each other. It wasn’t a lengthy [process],” Jimel said.

The proposal: Father’s Day 2007, at J Alexander’s [now Redland’s] in Hoover. Mario told Jimel that he wanted to take her for a nice dinner after Sunday morning service.

“I’m a little bashful and I didn’t want all the attention so I waited until after we finished dinner and were walking to the car,” Mario said. “I opened the car door for her, and when she [pivoted to sit down in the car] I was already down on one knee with the ring in my hand and asked her will she marry me. [Jimel] was startled and a little caught off guard because of course, I could’ve done it inside the restaurant we were just in,” he laughed, “but I chose to wait till we got outside. She started looking all googly-eyed, shed a few tears, and said ‘yes’.”

Jimel said she had been expecting Mario’s proposal for months, after finding out he had asked her father for her hand in marriage, “but some months had gone by and I was starting to get a little bit frustrated,” she laughed, “I think it was his bashfulness that kept him from asking [sooner], but of course, I accepted and said ‘yes’. We kissed, and shared the news with our family,” Jimel said.

The wedding: At Faith Apostolic Church in Birmingham, officiated by their former pastor, Bishop Heron Johnson. Their colors were pink and green.

Most memorable for the bride was a string of happenings that day.

“I remember taking pictures before the wedding started and when I was taking pictures with my dad, he cried the entire time and my dad is not a crier! He could hardly take the pictures because he was wiping his eyes and nose… And just seeing Mario looking at me and smiling as I was walking down the aisle, I was so excited to get to him that I was walking fast, and my dad had to whisper ‘slow down, you’re walking too fast,” Jimel said. “And after the wedding, I remember flashing my ring and screaming ‘I’m Mrs. Gibbs, y’all!’, and Mario rushing to leave after the reception… He was like ‘let’s go, let’s go’, and the wedding coordinator was like why is he in such a rush, and somebody said hmm, it’s his wedding night, I wonder why?” she laughed.

Most memorable for the groom was a wardrobe mishap. We had made it to the church, I was with my groomsmen, and an hour before the wedding started I found out I had left my tie at the house because I was so nervous. I was thinking I was going to be the only groom to come down the aisle without a tie, but I sent a groomsman to go and get to for me. It was the best day of my life… the greatest moment of the day, though, was seeing her walk down the aisle. I knew it was real then, and I couldn’t wait to spend the rest of my life with this fine woman coming down the aisle to take my name,” Mario said.

They honeymoon in Destin, Florida. “He did a surprise road trip, I did not know where we were going,” Jimel said.

“I wanted to [hold] the surprise until we got there, but I told my dad where I was taking her and he called and the first thing out his mouth was [about] where we were going. It was our first road trip together and we had fun talking and laughing and listening to music,” Mario said.

Words of wisdom: “Always make time for one another, even if it’s once a week, even if you have children, set aside time for just you and your spouse. A time where you can cater to each other, rub each other’s feet, give massages, and ask about them and how they’re doing. It’s important not to get away from having that intimate alone time,” Jimel said.

“I agree with everything she said, but communication is my number one thing. Asking each other about their day, how they feel, and what you can do to support them is very important. From our very first night together on our honeymoon, I tell my wife that I love her before we go to bed, and I make sure we go to bed in peace,” Mario said.

Happily ever after: The Gibbs have three children, Mario Jr. 12, Jillian, 9, and Joshua, 3. They attend Faith Apostolic Church in Birmingham where Mario serves as a deacon and Jimel, with the children’s church and healthcare ministries.

Jimel, 42, is a Forestdale native, and Minor High School grad. She attended the University of Alabama [UA], where she earned a bachelor’s degree [BSN], master’s degree [MSN], and Doctor of Nursing Practice [DNP], and works for Optum Health as a nurse practitioner.

Mario, 43, is a Wenonah native, a Wenonah High School grad, and works as an installer for Cintas Uniform Company in Bessemer.