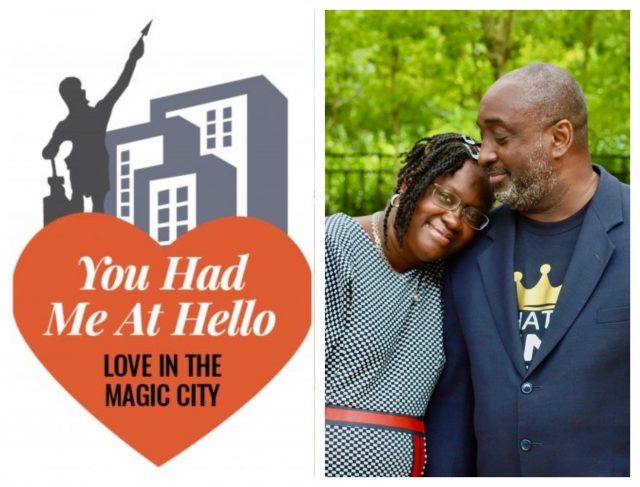 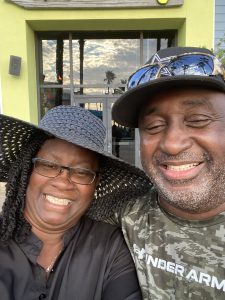 Met:  Jan. 15, 1995, at the now-closed Circuit Nightclub on Birmingham’s southside. “I spotted Jennifer first, I was up on the second level and I looked down and saw her standing there minding her business, and I said on my way out I’m going to walk by and speak to that young lady.

When he spoke to her, Nathaniel said he found her character “alluring. I said, ‘well now I don’t want to leave,’ and we talked for a while… I’m a transparent guy, I told her I’m divorced and that I wasn’t looking for a relationship, I just thought she was nice looking lady and I wanted her to know that,” Nathaniel said.

Jennifer remembered her mind was elsewhere when Nathaniel approached. “I needed to go to the restroom,” she laughed, “and so he escorted me there, and when I came out we continued to talk and he offered me food from the food truck. He had a little conversation with my brother and I gave [Nathaniel] my number… Then he escorted me to my car I didn’t know the area and he was a gentleman and helped me find my way,” Jennifer said.

“When she gave me her number, I didn’t write it down, and she said ‘aren’t you gonna write it down?’, and I said, ‘no ma’am, I’m good with numbers…but I didn’t call her for two weeks,” Nathaniel said.

“And since it took him two weeks to call, I thought he forgot my number, and I didn’t think he was going to call because he said he wasn’t interested in a relationship,” Jennifer remembered.

“I didn’t want to mislead anyone, so [I didn’t call right away], but then I thought about her again and I said, ‘let me give her a call,’” said Nathaniel.

First date: Feb. 3, 1995, on Jennifer’s birthday. They went on an impromptu date to KFC in Five Point’s West.

“I didn’t know it was [Jennifer’s] birthday when I called, I just happened to call and I asked her would she like to talk and she said, ‘it’s my birthday’ and I asked her would she let me take her out, and she said ‘no, you don’t have to do that’, and I said, ‘no, you gotta let me take you somewhere,’” Nathaniel said. “I told her I like to eat at KFC, and she said, ‘ok, we can go to KFC’. I went and picked her up from her apartment in Wenonah and we went from there.”

At KFC, Jennifer remembers Nathaniel buying her a Coyote coffee mug for her birthday.

“KFC was having a promotion with Looney Toons, and I said, ‘well I got to buy her something…’ It was only my second time seeing her, I had only met her two weeks ago, but I felt the need to buy something, so I purchased the mug and said, ‘Happy Birthday,’ and she held on to that cup for years,” Nathaniel said.

“I’m a simple person and it doesn’t take much to please me; I was appreciative of him. Just sitting there talking to him, I realized I had already fell in love with him, it was love at first sight. I was just happy [to be in the company of] this handsome man,” Jennifer said.

The turn: “I found myself wanting to talk to her every day, and most of my life I’ve been a loner, and then I found myself wanting to be with her every day and the relationship grew from there,” Nathaniel said. “We had so much in common. Some of the same ideas and thoughts, I enjoyed being in her company, and I would get her to watch sports with me.”

“He didn’t ask me if I wanted to be his girlfriend, we just grew through friendship,” Jennifer said. “It seemed like we were meant for each other, everything was real easy between us, it was easy to communicate, it was just right. We didn’t have to impress each other, he was like my best friend.”

The proposal: Nathaniel proposed in 1998, at Jennifer’s apartment in Wenonah, and presented her with a ring in 1999. “That was when I sealed the deal,” Nathaniel said.

“He didn’t do it romantically, he just asked,” Jennifer laughed.

“It wasn’t a scene, I didn’t do it in front of nobody, we were just sitting on the couch [conversing], and I said, ‘would you spend the rest of your life with me?’ And she said, ‘I fell in love with you the first time I met you’, and that gave me my answer right there, and I accepted that and left it alone until I bought the ring,” said Nathaniel.

“We went to the mall [department store], it used to be Parisians, and I picked it out and he paid for it and put it on my finger. It was nice and simple…still not romantic though,” Jennifer laughed.

“I’m not the romantic type, and I would’ve bought her any ring she wanted, and since I didn’t know what kind of ring to buy for an engagement ring I said, ‘let’s go down there and you pick it out,’” Nathaniel said, “that way I hit the nail on the head because she loved the ring because she picked it out!”

The wedding: At Mountain View AOH Church of God in Birmingham, officiated by their pastor, Overseer Dwight Kimbrough.

“It was a nice simple ceremony after the 11 o’clock Sunday morning service. I wore my twin sister’s wedding dress and my maid of honor and his best man had on what they wore to church that day,” Jennifer laughed.

“It was a full house, the saints stayed behind, and some of our coworkers and friends came,” Nathaniel added.

Most memorable for the bride was “the smile on our children’s faces, and the smile on my husband’s face,” Jennifer said. “He had the biggest, brightest smile on and was smiling like he had inherited a prize, he was mesmerized. And having our church members, family, and friends there to witness our marriage.”

Most memorable for the groom was everyone’s excitement. “Everybody was super excited when I walked in the church, I told several people to calm down, I’m the one getting married; they were acting like they won the lottery or something,” Nathaniel laughed. “It made me start to get a little nervous because everybody was more excited than we were… and when she came down to walk down the aisle they were overjoyed, it felt like we were rock stars!”

Words of wisdom: “Keep Christ-centered in your life, always communicate, and always resolve your issues. I fell in love with my wife 27 years ago, don’t lose that love throughout the years, keep the home fire burning,” Nathaniel said.

“Encourage each other, keep God first in everything you do: in decisions that you make, and the actions that you take. Love each other unconditionally, and keep others out of your marriage,” Jennifer said. “Laugh, smile, and enjoy your life together. We grew together, we met at the nightclub, but we came out the club together and started going to church as a family in 2000.”

Happily ever after: The Rice’s are a blended family, Nathaniel II, from Nathaniel’s previous marriage, and Rory, and Marcus, from Jennifer’s previous relationship.

The family are members of Woodland Park AOH Church of God, where they serve as Deacon and Deaconess, and are licensed teachers in the AOH organization.

Jennifer, 56, is a Wenonah native, a Wenonah High School grad, and works as a patient access and financial counselor at Children’s of Alabama.

Nathaniel, 62, is a Pratt City Native, Jackson Olin High School grad, and attended Central Texas College, where he earned a bachelor’s degree in automotive technology. He served in the United States Army as a combat engineer and currently works as a steel worker at US Steel.