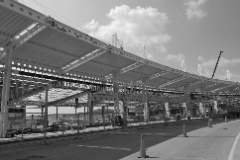 BIRMINGHAM, Ala. – In the Birmingham Airport Authority Board of Directors’ meeting, directors received a progress update on the airport’s most significant capital improvement project. Jeff Hart was there to speak on behalf of Brasfield & Gorrie/BLOC, the project’s contractor.
The airport’s terminal modernization continues to show the significant progress made by the project team. Demolition work on the airport’s apron and rotunda located at Concourse C is nearing completion.  Removal of the 30 year old roof on the north portion of the terminal is complete and new roof monitors and exterior wall construction has begun on Concourse C. Work in the parking deck related to the terminal modernization project continues with foundation work on new passenger crosswalk at parking deck elevator C.  The improvement for this transition came about to meet the Authority’s goal of enhancing passengers’ experience from the parking deck to the aircraft and back.
Birmingham Airport Authority’s Project Coordinator, Tom Wesley updated the board on the project’s finances.  The project is approximately 75 percent complete as of today. The Birmingham Airport Authority has 75 percent of the contracts paid and still expected to be complete by summer 2014, on time.
On September 6, Congresswoman Terri A. Sewell announced $8,849,665 in funding for the Birmingham-Shuttlesworth International Airport for security enhancements and VALE infrastructure.      Birmingham-Shuttlesworth International Airport has been granted $6,001,875 for terminal security enhancements and $2,847,790 for VALE Infrastructure. Through the Voluntary Airport Low Emission Program (VALE), the Birmingham Airport will be able to finance equipment lower emissions on the airfield, gas electrification, and other air quality improvements. By the end of the terminal modernization project, the Birmingham Airport Authority will apply for LEEDs silver certification from the U.S. Green Building Council for its sustainable terminal project. The security grant will be used to fund several security aspects related to the terminal modernization project. The Birmingham Airport Authority is responsible for 10 percent matching funds for each grant awarded. The VALE grant has reduced the Airport Authority’s portion of the project funding from $13 million to $10 million. “We continue to seek additional funding sources to help alleviate the cost to our airline partners,” said Al Denson, Birmingham Airport Authority President/CEO, “We are grateful for the support of everyone involved in securing these grants.
Board members received a presentation by independent auditors, Banks, Finley, White & Company on the Authority’s annual audit report.