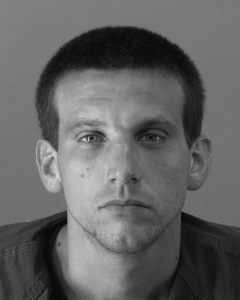 The Birmingham Police Department reports that detectives have arrested and charged a suspect in connection with a homicide investigation. The victim was discovered at 1407 17th Avenue South, Apartment 207.

The victim has been identified as:
James Belyeu, W/M, 54, of Birmingham, Alabama.

The suspect has been identified as:
Robert Buddenhagen, W/M, 28, of Birmingham, Alabama. A Murder warrant with a $75,000 bond has been obtained against the suspect. The suspect is in the custody of the Jefferson County Jail.

Officers from the South Precinct responded to the incident location to investigate a report of an assault. The officers arrived to find the victim lying unconscious inside his apartment. Birmingham Fire and Rescue responded to the scene and transported the victim to U.A.B Hospital for treatment. The victim remained in I.C.U. until hospital staff pronounced him deceased on Friday, September 20, 2013.
Officers learned that the incident took place sometime between Saturday, September 14, 2013 and Monday, September 16, 2013 when the victim was found. The victim was found to have been engaged in an argument with the suspect about their relationship prior to the assault. The victim suffered subsequent fatal wounds as a result of a beating by the suspect.

The Birmingham Police Department reports that detectives are conducting a homicide and meth lab investigation. The incident occurred on Friday, September 20, 2013 at approximately 6 a.m., at 3652 Clairmont Avenue.

The victim has been identified as:
Derrick Phillips, W/M, 23, of Birmingham, Alabama.

South Precinct officers responded to the incident location to investigate a report of shots fired in the area. The responding officer was unable to locate anyone or activity in the area. Approximately twenty minutes later officers received a report of a deceased person inside an apartment. Upon arrival, officers located the victim lying inside the apartment unresponsive. Birmingham Fire and Rescue arrived and pronounced the victim deceased on the scene.
While inside the apartment, officers noticed a strong odor and observed components of what appeared to be an active meth lab. Detectives from the BPD Narcotics Unit arrived and confirmed that the meth lab was active and contained potentially dangerous chemicals. The homicide investigation inside the apartment was temporarily suspended until the potentially dangerous chemicals were removed from the apartment.
If there is anyone who has information pertaining to this case, they are encouraged to contact the BPD at 254-1764 or Crime Stoppers at 254-7777.