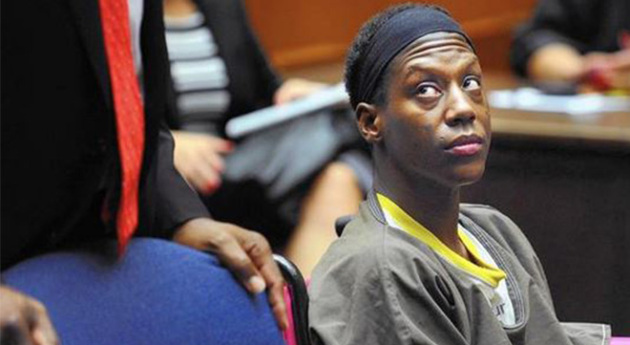 LOS ANGELES (AP) — An officer dropped a nightstick during a struggle with a homeless man who was shot to death by police on Los Angeles’ Skid Row, and the woman who picked it up now faces an assault charge that could send her to prison for 25 years to life.

The March shooting was captured on video, which shows Trishawn Cardessa Carey, 34, briefly lifting the baton as police scuffled with the man. Police say Charly Keunang grabbed an officer’s holstered gun when they tried to take him into custody on suspicion of robbery, leading three other officers to open fire.

Carey faces the lengthy prison term for a charge of assault with a deadly weapon because of California’s three-strikes law. Under the law, people convicted three times of violent or serious felonies are required to serve long sentences, and Carey has nine prior convictions, including two for serious or violent crimes, The Los Angeles Times reported Wednesday (http://lat.ms/1Km75Sb ).

Her supporters argue that her case is another example of excessive charges filed against black people. The shooting sparked several protests and led some advocates to say Los Angeles police are too quick to use violent tactics.

Denton told The Times he plans to argue that Carey tried to attack the officer by “picking up the officer’s baton and raising the baton to strike the officer.”

“An attempt to strike someone is assault,” he said. “There’s no mystery here. The reality is all the conduct involved in this case is on the video.”

Carey’s attorney, Milton Grimes, said he will try to show that his client didn’t threaten or attack any officers.

She has a history of mental health and medical problems and should be out of prison and getting treatment, Grimes said. Her bail was reduced from more than $1 million to $50,000 Wednesday.

“I’ve seen the video, you’ve seen the video; she doesn’t go after anybody,” Grimes said. “Is possession of a baton an assault? No. The legal basis appears to me to be a distraction or cover-up of the killing of a man by the police.”