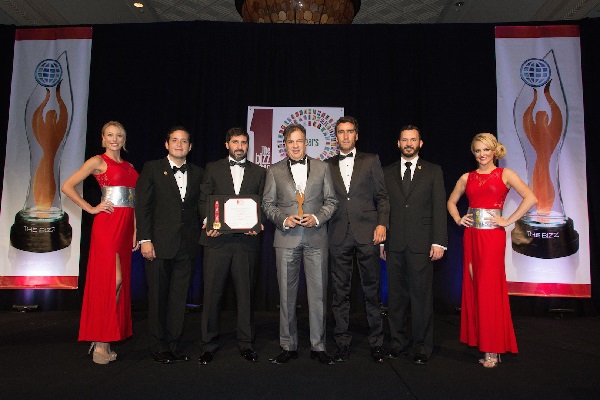 Miami, Florida (August 14, 2015) – AVFA LLC has given Puerto Rico another reason to feel proud. This time, it has been honored by the World Confederation of Businesses (WORLDCOB) with one of the most important business awards in the world: THE BIZZ 2015, in the category “Beyond Success”. This distinction was given out on August 1 at a gala ceremony at the Caesars Palace Hotel, Las Vegas, USA.

AVFA is a successful firm that helps brands, products, services, events, companies and personalities to have under the umbrella of a single company, the strategic communications services and effective business resources to successfully capture the attention of the Latino public and inspire immediate action. Based in San Juan, Puerto Rico; with offices in New York, NY and Miami, Florida; AVFA’s board of directors has specialized in the development and implementation of campaigns dedicated to the Latino market in the United States and Latin America, having won more than ten prestigious international awards and nominations, among which is a 2012 Emmy® nomination.

This honor will allow AVFA LLC to continue growing as a business, increasing its capacity for trade relations, generating more business, and revitalizing its corporate image.

The representatives who received the award on stage (from AVFA LLC) were Mr. Samuel Ortiz, COB; Samuel Beniquez, CEO and Alexander Sanchez, Senior Associate. Upon receiving the award, Mr. Ortiz, the company’s Chief of the Board, said: “I feel very proud to have worthily represented my beautiful archipelago, Puerto Rico, and receive this important award. Puerto Rico is small in territorial size, but produces thousands of talented and intellectual people, who today lead in the most important industries in the world. Our firm, as a bank of strategic and creative minds, is committed to continue innovating and providing excellent service to our present and future clients and making winners all those companies and entrepreneurs who do not leave their future in the hands of luck.”

WORLDCOB is a leading business organization based in Houston, Texas, which fosters the development and growth of over 3,000 companies in 100 countries, recognizing and driving the advances of outstanding businesses and businessmen, as well as promoting corporate social responsibility.

AVFA LLC is currently an Elite Member of WORLDCOB, giving it significant business opportunities with other WORLDCOB members and the fundamentals necessary to promote a socially responsible corporate culture.