When 10 Birmingham metro area high school students recently returned from a trip to Washington D.C., they came back with more than they expected.

The Legacy Youth Leadership Program, spearheaded by the Birmingham Civil Rights Institute, is a series of training experiences and internship opportunities to help develop students into community leaders and productive citizens.

The BCRI recently sent the students to learn about the Holocaust and how to be leaders in their community. They learned a lot more than that, though.

“I feel like we got to know people and other ways of thinking that we never knew before,” said Gabrielle Johnson, who is in the 10th grade at Briarwood Christian School.

“The thing that really stood out to me was that bystanders are just as responsible as the perpetrators,” Johnson said. “A lot of people [during the Holocaust] didn’t say anything, and that’s just as bad.”

The students admitted that initially they thought the trip would be boring, and they would go from lecture to lecture; however, they came away were surprised at how engaging the trip was.

“They would ask for your feedback on a lot of things,” Johnson said. “When we first got [to D.C.] we all talked about different things we believe in and how our beliefs affect us.”

Student learned that they are never too young to start making an impact in their community, Johnson said. During the five-day trip they toured national landmarks in D.C. such as the United States Holocaust Memorial Museum, the FBI Academy, and the Franklin D. Roosevelt Memorial and Lincoln Memorial.

“In one seminar, they talked about giving your 15 percent [of your time, effort] to your community,” said Jihaaya Muhammad, 18. “So it made me think about what my 15 percent was and how I can come back to Birmingham and help my community.”

Muhammad, who just graduated from home school and will be attending Jeff State Community College in the fall, wants to help by getting certified for her insurance license.

“A lot of African-Americans don’t have life insurance,” Muhammad said. “One way to transfer wealth through the family is through life insurance and I want to help with that.”

One particular event that stood out was a talent show where one student delivered a poem that came with a powerful message, said Amiya Whitson, 15, a 10th-grader at Gardendale High School.

“Her [poem] stuck to people because she was Caucasian and her poem was about Black Lives Matter and how she didn’t like to hear about mothers losing their sons,” Whitson, 15, said. “It was a lot about the things going on in the world, and how people don’t say anything about a lot of the issues.”

Another experience was getting used to rooming with different people.

“We had to room with people from other groups,” Muhammad said. “There were definitely a lot of friendships formed from it.”

Now that the students are back, they are now focused on how they can make a difference.

“We have to start from home before we can go worldwide,” said Whitson, who is in the Family, Career and Community Leaders of America.

Ways they plan on starting at home is by getting local churches involved in their efforts to be part of their Victim Foundation.

“We want to get the churches from the Alabama Christian Movement for Human Rights, which Fred Shuttlesworth founded, to be part of our foundation,” Whitson said.

The Victim Foundation, which they thought of in D.C., was inspired by the deaths of Alton Sterling, Philando Castile and the Dallas police officers.

“At first the Victim Foundation was an effort to raise money for the families who lost a loved one, but then it branched out to non-violence, in general,” Johnson said.

“It’s not just for black lives, because there are other lives being taken,” said Whitson. “It’s a way to get money for children for school, funeral costs and counseling.”

One part of the Victim Foundation is to have mediation meetings.

“Mediation meetings are where a group of people come in — almost like court — but both people state what problem they have with the other person,” said Chadwick Smith, 17, a Legacy mentor who attends Central Park Christian School. “Instead of having problems that could potentially grow in the future, they will come on equal terms to try to peacefully solve their issues.” 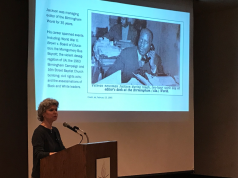