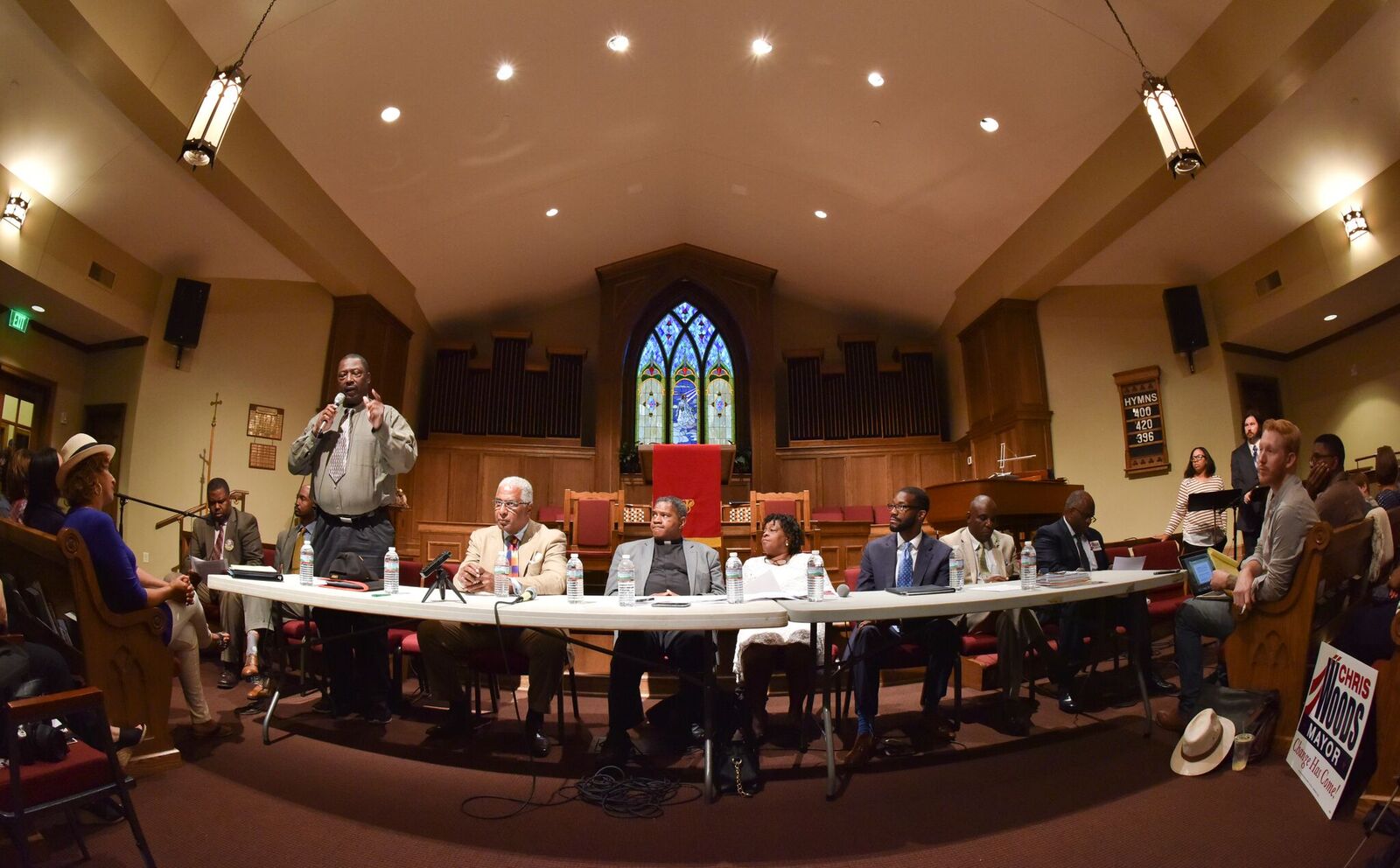 By Cody Owens
For The Birmingham Times

Incumbent Birmingham Mayor William Bell and eight other candidates seeking to replace him in the Aug. 22 municipal elections gathered Friday night at the Woodlawn United Methodist Church for a forum.

With all the pews occupied, a diverse group of residents could be seen standing in the back of the hall as the crowd spilled over onto the basketball court located in the rear of the large church auditorium.

The wide-ranging conversation remained largely civil, with candidates, for the most part, adhering to the allocated two-minute response time while they passed around four microphones that periodically cut out during the questions and answers. Some candidates, including Mayor Bell, opted to speak without a microphone.

Throughout the evening, the mayor highlighted various initiatives and projects that his administration has and will focus on in the future, he said.  “We’re in the process of developing a 100 gigabyte network so that we can offer free Wi-Fi throughout the city of Birmingham that will help with the educational opportunities,” Mayor Bell said. “People talk about how there is no investment west of [I-65] or in the outlying areas. We’ve embarked on a plan to spend nearly $40 million dollars to renovate downtown Ensley.”

The mayor explained that his administration is determined to convert the Ramsay-McCormack building in Ensley into a new municipal court building that will also house the Birmingham Police Department as well as the Birmingham Fire Department.

Woodfin questioned Bell’s proposed renovation of the building at a time when the Birmingham Public Library is in need of funding for repairs. “You got a library where the escalators and elevators don’t work…If you want to invest in Ensley, put $40 million into the whole neighborhood, not one building,” Woodfin said.

Crime was another topic that came up.

“We’re going to get these guns off the street,” said Lanny Jackson, during his opening remarks, a theme that he brought up multiple times. He said he didn’t believe Mayor Bell was “doing that bad” and unlike the other candidates who spoke, did not take an adversarial stance toward the current administration.

There was also discussion about the need for community policing in Birmingham’s 99 neighborhoods and how those efforts could potentially ease the pressure on the “understaffed” and “underfunded” Birmingham Police Department, according to several candidates.

“My training officer used to ask me if I was hungry,” said Davis, a 22-year law enforcement officer recounted. “He’d say, ‘I think we’re going to go eat some meatloaf today.’ I thought we were going to a restaurant. No. We were going right over to an individual’s house…She told us everything that went on in the neighborhood. And I ate the meatloaf, as you can see.”

If elected, Woods said he would ask his officers to talk to 10 people a day in order to build trust between police and residents in the community.

Woodfin said the city needs to do more for police officers and make available incentives for them to stay in Birmingham and foster relationships with people on their beat instead of transferring to other municipalities.

“Right now too many young black boys do not trust the police,” Woodfin said. “If you have real community policing, officers know how to have relationship building on their beat. The first time they interact with people on their beat won’t be when a young person is in trouble.”

Sims said, “the violence at city hall needs to stop first,” referring to a 2015 incident in which Mayor Bell and Councilor Marcus Lundy got into a high-profile altercation within earshot of the council chambers during a meeting.

Mayor Bell initially declined to respond but later ­­– during the portion in which audience members we allowed to direct questions to candidates – was asked by a young boy “why should people vote for a mayor who got in a fist fight with a councilor?”

Bell responded, “You make a very good point. The mayor is supposed to set the standard. I promise you this: I’ve never attacked anyone at city hall. I never laid a hand on anyone at city hall … if that councilor were standing here in front of us, he would not rebut what I say.”

Matthews said all of the issues can be tied back to Birmingham’s poverty rate. “Because of poverty my mother tried to abort me,” Matthews said. “Now that God has allowed me to be in a great place they call Birmingham, there is another giant I face. I’m here tonight because I’m representing all those that don’t have smart phones to make comments, or have cars to be able to sit here in this church. I have one enemy and that is poverty. Everything we talked about tonight finds itself in front of that giant called poverty.”