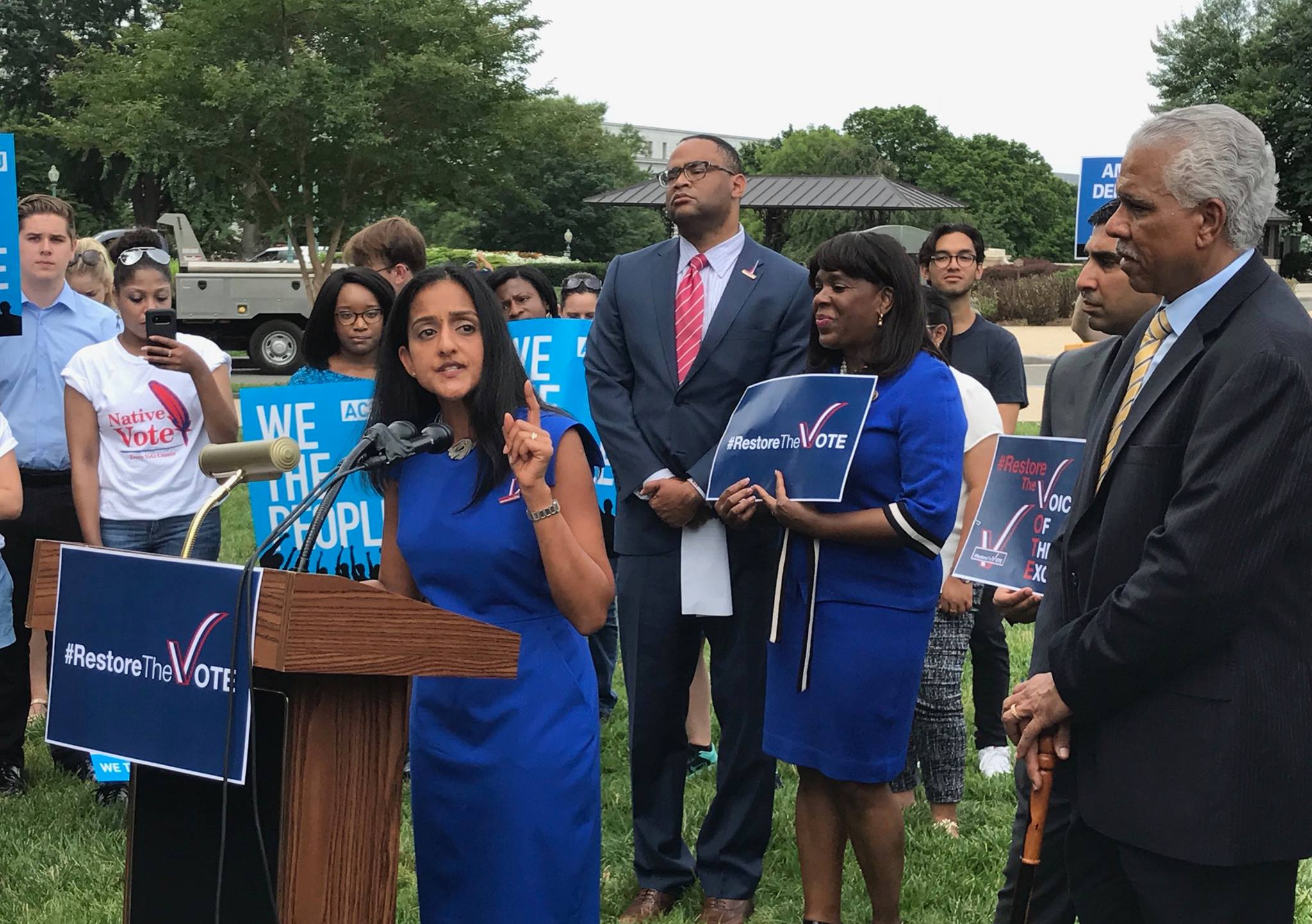 Vanita Gupta, 41, took the helm as President and Chief Executive Officer of the Leadership Conference on Civil and Human Rights, the oldest coalition of civil rights groups in the United States, in early June. A graduate of Yale Law School who was born and raised in Philadelphia and worked as a civil rights lawyer and Deputy Legal Director of the ACLU, she was named head of the Civil Rights Division of the U.S. Department of Justice by President Obama in October 2014. This interview was conducted by Khalil Abdullah for New America Media.

NAM: How long have you been at the Leadership Conference?

Gupta: I started June 1. I feel like I’ve been drinking from a firehose because literally every day there is something new to confront with the Trump administration officials and what they’re doing to roll back civil rights.

NAM: What was your reaction to Charlottesville?

Gupta: The events in Charlottesville were tragic, but unfortunately, they are not unique. What has been shocking is the failure of the president of the United States to unequivocally condemn bigotry, racism and white supremacy. Now the rest of us must uphold America’s ideals of fairness, justice and inclusion, because Donald Trump has proven he will not. Those who do not clearly, firmly and unequivocally choose to side against hatred, racial bigotry and intolerance are complicit.

NAM: What was your path to the Leadership Conference? What were some of your formative experiences?

Gupta: My parents immigrated from India in the late 1960s and have been in Philadelphia for the last 25 years. I was born in the USA, but I grew up moving around a fair amount – England and France, and then back to Philadelphia. I was always acutely aware of being a minority in majority white countries. In England, there were racial incidents with skinheads that were formative.

I became an activist in high school and college … I had a sister who was coming out as a lesbian at the time which caused a lot of waves in my family. So there was both the personal and political for me.

I had a variety of post-college jobs in Boston in the 1990s dealing with youth violence and the gun epidemic. There was a pretty punitive approach but there were also those pushing for a public health approach that recognized youth violence has its roots in social inequality. This motivated me to go to law school and focus on civil rights and the criminal justice system.

NAM: Out of this firehose you’re drinking from, is voting a preeminent concern?

Gupta: Yes. There’s a fight with the Presidential Advisory Commission on Election Integrity which President Trump established. It’s requesting a whole bunch of data from the secretaries of state, allegedly to be able to identify voter fraud. But it seems to be laying the groundwork for mass voter suppression efforts. The data request has galvanized a fairly strong bipartisan opposition.

NAM: What’s the source of the concern?

Gupta: Some secretaries of state have outright concern about the overreach of the federal government in trying to demand data when there are state laws that protect the privacy of voters. There are concerns about security issues when we’re looking at issues around Russian interference with our elections. Commission members are trying to create a national database that could be prone to hacking, and there’s nothing in their data request letter that has any guardrails on security issues or privacy issues.

Based on the backgrounds of several commission members – Kris Kobach (the secretary of state of Kansas), Vice President Pence (former governor of Indiana) … they all had a history of supporting and advancing voter suppression efforts. So there’s a lot of grave concern about the commission right now.

NAM: How has the Leadership Conference responded?

Gupta: We’ve been speaking out and encouraging secretaries of state to not engage with the commission in turning over data. Some of our members have sued, filing creative litigation against the commission because it may be violating federal laws and the Constitution by its data request overreach. [Some of our members are working with their congresspersons] to make sure Congress has oversight because taxpayers are funding the commission.

We’re also supporting the introduction of an automatic voter registration bill in Congress so that when a person is at the Department of Motor Vehicles or a social service agency, he or she is automatically registered to vote … Unfortunately, so far it only has Democratic sponsorship … Increasing voter access should be a non-partisan issue.

NAM: Your role involves managing the Leadership Conference coalition. How do you propose to deal with corporate members that have less than stellar records on civil rights?

Gupta: There are a lot of businesses right now and corporations that are speaking out to fight back an anti-civil rights agenda. Texas just passed a law that was very anti-immigrant. Over 50 major corporations signed a brief protesting the law and speaking out about how the law is not in the interest of business. I think for civil rights right now, we’ve got to marshal voices in our coalition and from other sectors that have the power to make change and need to be speaking out against very serious incursions on civil rights.

NAM: What do you view as incursions?

Gupta: Rollbacks from Attorney General Jeff Sessions on things like voting rights cases, and stances we took on LGBT rights … The Justice Department trying to take us back to the 1980s with policies that fuel mass incarceration at the federal level … The 2020 Census where there are concerns around whether there’s as much of an investment as needed to get an accurate count … These are just some examples where we need to bridge out the constituency of support for key civil rights fights.

NAM: How do you gauge the current time in the civil rights movement?

Gupta: I’ve joined the Leadership Conference at a time that feels kind of bleak for civil rights, but on the other hand, there really is nothing like a crisis to sharpen one’s focus, purpose, and identity as a civil rights lawyer. We’re seeing unprecedented solidarity among the 70-plus organizations that make the Leadership Conference because there really is a shared common purpose … It’s not just about resisting the policies of the Trump era, but also about building out our collective power to push for the vision and values that have always animated civil rights lawyers.

NAM: What keeps you going?

Gupta: People come to this work not because they’re making a million bucks. We do this because it feeds our soul and we feel like it’s a calling.