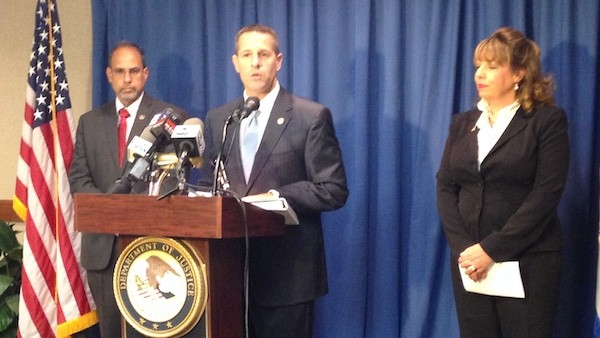 The case, in which Robinson has already pleaded guilty, involves allegations of improperly attempting to shield Drummond from massive payouts in cleaning up polluted areas of north Birmingham. If convicted the indicted men could be looking at massive fines of their own, and years in prison.

The six-count indictment was handed down by a grand jury on Wednesday against  Joel Iverson Gilbert,  and Steven George McKinney, both partners in the Birmingham law firm Balch & Bingham, and David Lynn Roberson, vice-president of government and regulatory affairs for Drummond Company.

The indictment alleging conspiracy, bribery and money laundering accuses Gilbert,45, McKinney, 62,  and Roberson, 66, of a conspiracy to bribe then-House District 58 Rep. Robinson to take “official action” favorable to their position against EPA actions in north Birmingham.

Balch & Bingham’s lawyers represent Drummond, whose ABC Coke division is one of five companies the EPA said in Sept. 2013 were potentially responsible for pollution in a designated area of north Birmingham including the neighborhoods of Harriman Park, Fairmont and Collegeville. The area is now a Superfund site after the EPA found elevated levels of arsenic, lead and benzo(a)pyrene during soil sampling. Any company determined to be responsible “could have faced tens of millions of dollars in cleanup costs and fines,” according to the indictment.

Robinson, 57, pleaded guilty on Sept. 7 to conspiracy, bribery, and honest services fraud for accepting a valuable contract between Balch & Bingham and his nonprofit Oliver Robinson Foundation “to influence and reward him for using his elected position to oppose prioritization and expansion of the EPA site, designated the 35th Avenue Superfund Site,” according to a press release from the U.S. Attorney’s Office.

In September 2014, EPA proposed adding the 35th Avenue Site to its National Priorities List (NPL) — which would have let EPA use the federal Superfund Trust Fund to conduct long-term cleanup at the site, provided the State of Alabama agreed to pay 10 percent of the costs — and was  also considering a petition to add Tarrant and Birmingham’s Inglenook neighborhood to the site, as requested by advocacy organization GASP.

According to federal officials, the alleged conspirators wanted to prevent north Birmingham from being placed on the NPL, prevent the expansion to Tarrant and Inglenook, and protect Drummond from the “tremendous potential costs” associated with the cleanup of the areas involved.

What they did, according to the indictment is set up “a tax-exempt corporation named Alliance for Jobs and Economy and recruit… corporations to contribute money to it to help fund opposition to EPA’s actions in north Birmingham.” Alliance for Jobs and Economy (AJE) then collected $195,000 from Drummond and four other corporations, then funneled nearly all of that money in monthly payments to The Oliver Robinson Foundation. Drummond alone gave the Robinson Foundation another $150,000, bringing the total to about $360,000 between 2015 and 2016.

The purpose of the payments, federal officials allege, was to get Robinson to use his official position to:

Jack Sharman of the law firm of Lightfoot, Franklin &White LLC, representing Gilbert, issued a statement proclaiming his innocence and that he was just doing his job legally.

“Joel Gilbert is innocent of these charges. He did not bribe anyone. This is a case that never should have been brought. Joel represented a client in a legal dispute with the EPA, a powerful and, in this case, over-reaching federal agency. Everything he did while representing that client was lawful and ethical,” Sharman said. “He did what is routine for good counselors to do for corporate and individual clients every day – he engaged a consultant through a written contract to perform real and lawful services.”

Sharman said Gilbert’s innocence will be proven at trial.

A statement on Roberson’s behalf by his attorney also contends he is innocent and “looks forward to his day in court and expects to be acquitted of all charges by a jury of his peers.”