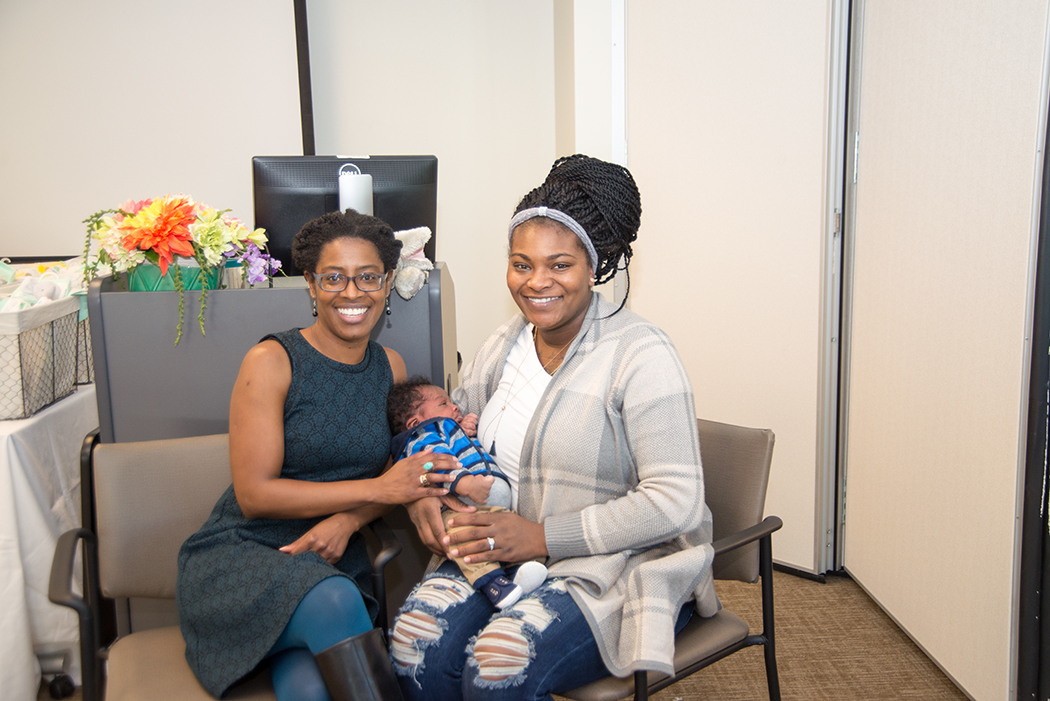 Frances Phelps remembers returning home to Alabama from Virginia in 1977 and having to drive to Murfreesboro, Tenn., for medical care because Birmingham’s Veterans Administration Hospital didn’t have a women’s clinic at the time.

“I would go up to Tennessee to the York Women’s Clinic,” said Phelps, 95, a World War II veteran. “When they opened the women’s clinic here, I started coming here.”

That was in 1993, and Phelps, a former airplane mechanic, was overjoyed.

“Oh, heavens, that’s a long drive,” said the Wilsonville resident, of her trips to the Volunteer State. “Having the clinic right here so I could go in any minute, there’s a world of difference.”

Phelps was at the Birmingham Veterans Affairs (VA) Clinic recently to help with the Teacher Ambassador Program, which offers lessons and resources for K-12 educators. The VA Women’s Health Clinic is located there.

The facility was formerly located on the first floor of the VA Medical Center—and there is a world of difference between that spot and the new site at Seventh Avenue South and 24th Street in the Birmingham VA Clinic that opened in February 2016.

The new VA Women’s Health Clinic is at least three times as large as the previous location, and the increased space is needed.

“Women veterans, as a whole, are one of the fastest growing cohorts in the military,” said Women Veterans Program Manager Amy Southern. “We need to be proactive, and we have excellent support here at Birmingham VA to do just that. Statistics show that women veterans are some of the highest growing users of the VA system nationally.”

Christy Musser assumed the role of VA maternity care coordinator in 2016, and she’s seen a dramatic rise in women who receive maternity services at the clinic.

“In fiscal year 2016, we had only a little more than 60 maternity patients,” she said. “For fiscal year 2017, we’ve had close to 115. We’ve almost doubled our numbers. A lot of patients are becoming more familiar with the maternity services we provide and are taking advantage of them.”

Every six months, pregnant veterans have a “shared medical appointment”—or a baby shower.

“We have about 25 women at each of those events,” said Natalie Brooks, a doctor of pharmacy at the VA Women’s Health Clinic. “We just shower them with gifts and services. They’re able to meet with our maternity physician here at the clinic. They’re able to meet with me, as well as with dietary and various other healthcare professionals here at VA.”

The VA Women’s Health Clinic doesn’t provide in-house maternity services; those patients are referred to local hospitals, and VA provides payment and coordination with services and transportation to medical appointments.

Birmingham has seen growth in women veteran users of VA services, matching the national growth of 15 percent, and the city’s VA Women’s Health Clinic offers gynecological and breast health services and also has on staff an intimate partner violence coordinator to address matters of domestic violence.

There are other signs of change, too, according to Navy Vet Sandra Harris, 63, who remembers not being treated for a cold at VA hospital.

“They wouldn’t wait on me,” said Harris, who served for 30 years in the area of intelligence doing “everything except the spy stuff.”

“In 1994, VA wouldn’t [treat] my cold because I was not male,” said the Vestavia Hills resident. “It was horrible. I was really mad.”

The Birmingham clinic that was located at the hospital was a first step, but it became an uncomfortable first step.

“When we were at the hospital, we had a very tiny clinic,” remembered Brooks. “It was kind of tucked in. This is much more accessible, more open. We don’t have the physician in one place, the nurse down the hall, the pharmacist on a completely different floor, and mammography and radiology not even available in some cases. It’s brought it all together.”