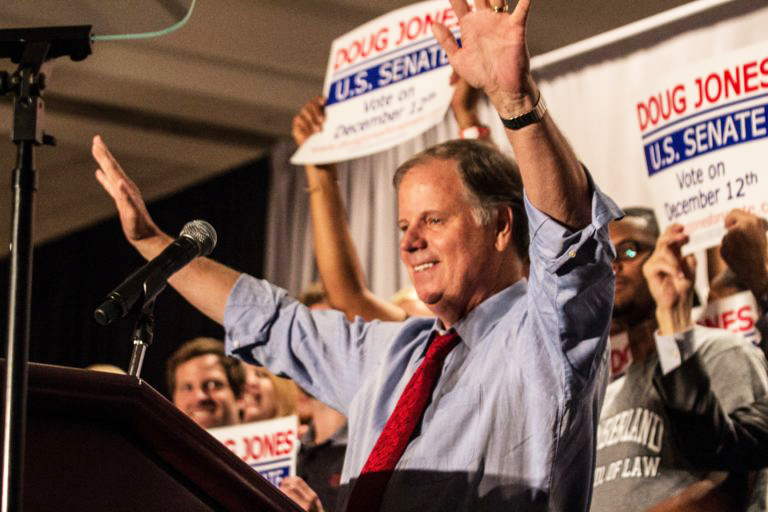 Doug Jones’s path to the U.S. Senate is simple, according to several local political observers. A large number of black voters will have to show up to the polls on December 12 to support the Democrat.

“Alabama is still a majority white and Republican state,” said Alan Tharpe, a professor of political science at Miles College. “There has not been a Democrat elected in the state [in a long time], so there needs to be a larger turnout of black voters.”

No Democrat has won statewide in Alabama since 2008, when Lucy Baxley was elected to serve on the Alabama Public Service Commission.

Larry Powell, a professor of communication studies at the University of Alabama at Birmingham (UAB), echoed Tharpe’s sentiments: “Jones can’t win without the black vote, but the race is deﬁnitely winnable [for Jones].”

Jones is well known in the black community, particularly because he successfully prosecuted Ku Klux Klan members for their involvement in the 1963 Sixteenth Street Baptist Church bombing that killed four little girls; Thomas Edwin Blanton Jr. and Bobby Frank Cherry were found guilty and sentenced to prison in 2001 and 2002, respectively. Jones is expected to do well among black voters, but he can’t take the vote for granted.

“This is a candidate black voters should be able to back,” said Powell. “He has a commendable track record worthy of their support.”

But Jones has a lot of work to do leading up to election day to get a large number of black voters to the polls, Tharpe believes. Aside from television and newspaper ads and some radio spots on local urban radio stations, Tharpe said he has not seen many signs of Jones’s message reaching the black community.

That may be changing, though.

Jones recently campaigned in Birmingham with the help of newly elected Mayor Randall Woodﬁn. He also has the support of U.S. Congresswoman Terri Sewell, who accompanied Jones on campaign stops in her hometown of Selma.

Tharpe said Woodﬁn’s endorsement alone should put Jones in a good position to get black voters to the polls in Birmingham. Woodﬁn, who was inaugurated on November 28, defeated incumbent mayor William Bell in a runoff election. Tharpe pointed to the new mayor’s successful campaign methods, which included using social media to target younger voters and engage all voters on a more personal level.

“If Woodﬁn is helping the Jones campaign in that way, it would be good, and you would not necessarily see the support until voters turn out on election day,” Tharpe said.

The timing of the December special election could have an impact on turnout, according to political observers. The election is right in the midst of the holiday season, when people are more concerned with shopping for gifts and planning for holiday gatherings.

Natalie Davis, a retired Birmingham Southern College political science professor, said special elections historically have low voter turnout, but this one could see signiﬁcantly lower numbers. She thinks the date, chosen by Alabama Governor Kay Ivey, a Republican, was set to possibly depress the number of people who show up at the polls.

“It is close to Christmas, so voting is not on their minds,” Davis said.

Powell said Moore’s campaign is counting on low voter turnout to help boost their candidate. But Davis believes there is still time to get black voters to the polls. She expects the Jones campaign to ramp up efforts to get out as many voters as possible through telephone calls, mailings, and newspaper, radio, and television advertisements.

As the election nears, the Metro Birmingham chapter of the National Association for the Advancement of Colored People (NAACP) is reaching out to black voters.

“We have phone banks going, and we have been working for the last two months encouraging people to vote,” said Metro Birmingham NAACP President Hezekiah Jackson IV, who said his organization is not endorsing a candidate but instead urging people to vote.

Some, including Jackson, believe the controversy surrounding Moore will inspire more blacks to cast ballots next week. Moore was twice elected chief justice of the Alabama Supreme Court, but he was removed both times for refusing to follow federal orders. In addition, Moore is currently embroiled in a sexual misconduct scandal: several women have come forward alleging that he made sexual advances toward them when they were teenagers; Moore has vehemently denied the allegations.

Jackson said interest in the upcoming election appears high among blacks, including his nephew who he said recently had his name added back onto the voting rolls after being inactive. Like many black voters, Jackson’s nephew voted for President Barack Obama but failed to vote in elections since Obama left ofﬁce.

“So many people just felt powerless to make any change,” Jackson said. “But now they may feel like voting can be their contribution to the cause.”

There are signs that Alabama residents are paying attention to this heated Senate race. According to the Secretary of State’s office, about 65,000 people across the state have registered to vote since August 15.