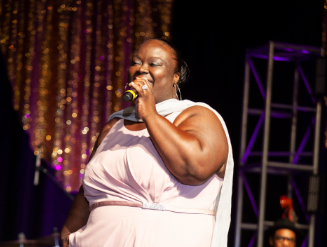 When you’ve lived a life like Stephanie “Lady B” Byrd’s, you learn the importance of a good laugh.

Given up at birth, she was left in the care of hospital nurses as a Safe Haven baby in Jersey City, N.J. Due to her mother’s heroin addiction, she entered the world craving the substance and had to undergo multiple treatments to overcome the appetite.

A close relative who was notified of the situation relocated the infant to Alabama, where she was placed into the foster-care system. At 18 months old, she was adopted into a volatile family that “wasn’t a good situation,” according to the now-comedienne.

She was returned to the foster-care system, where she remained until she was emancipated at age 21.

Lady B’s life experience would leave most spiteful, but she channeled her time and energy into positive outlets as a coping mechanism. Little did she know that it would help shape her career as an entertainer.

“It wasn’t all bad,” she said. “There’s always been something inside of me that never allowed me to just remain bitter. I’m not saying every day was a great day, but I just have never been able to wallow in the ‘why me.’ I think that’s a huge part of it, being able to get up the next day and still push.”

Lady B, 31, is part of Birmingham’s legion of clean comics. Omitting profanity from her routine was never a challenge.

“In my personal life, I don’t use a lot of vulgar words, so it’s not hard to transcend that into the act because it’s not part of my normal conversation,” she said. “I’m still the free spirit on stage. You still get all of me, but vulgarity is not part of it.”

If anything, patrons have commended her for being funny without “sentence enhancers.”

“You Can Do This”

Lady B’s path to becoming an entertainer dates to her days at Birmingham’s A.H. Parker High School, when and where she was still discovering herself.

“I wasn’t the cutest or most popular,” she recalled of her adolescent days. “I was the dorky nerd person.”

She recounted an encounter with a high school jock, who would occasionally “rock,” or pester and tease, her.

“They call it bullying now, but he was just rockin’ me,” she said. “I walked into the hallway and was about to cry, then I had epiphany moment of ‘wait a minute!’ I went back into the classroom and rocked him back until the bell rang.”

While that may have been the start of Lady B’s comedy career, it would be years before she got the courage to take the stage.

In January, Lady B made her official debut at Birmingham’s leading comedy club, The StarDome, for an open mic night. The gig, which took three months to secure, paired the amateur alongside many of the Magic City’s elite. Not to mention, she was performing in a venue that has boasted sold-out shows by renowned comedians Mike Epps, Bruce Bruce, Cedric the Entertainer, and Birmingham’s Rickey Smiley. To the rookie comic’s surprise, she came in first place.

“There were other established comics that the audience knew, and out of all those people I won,” Lady B said. “It was like, ‘Girl, you can do this!’”

The accomplishment “kind of lit a fire inside of me to become a comic,” she said.

“A lot of people have talents and gifts, but if you don’t see yourself using them, there’s no point. You can tell me I’m funny all day, but if I don’t own the funny myself, I’ll never fully walk into it.”

Lady B began to hone her craft by studying stand-up specials on HBO, Netflix, and YouTube, as well as classics from comedy greats Richard Pryor, Redd Foxx, and Eddie Murphy. Among the many lessons she learned was that there is a science to stand-up. Like a song, the jokes have a certain rhythm.

“How many seconds did the comic wait after the joke to deliver the punchline? How long did they wait for the audience to laugh before they started the joke back? I had to study the form itself, so that when I do my jokes I’ll know, ‘You need to wait this many seconds before the punchline,’” she said.

“Nothing Is Too Small”

As the mother of five children, ranging from 3 months to 10 years old—“six if you count my husband,” she said—Lady B considers the pursuit of her passion a miracle. Her spouse works from sunup to sundown, so she can pursue comedy.

Between changing diapers, the comedienne said she has no shame in stalking social media for gig opportunities. Her tenacity and hustle even got the attention of few big name-comedians, including Smiley, who have complimented her for her larger-than life personality.

“Nothing is too small for me to do,” Lady B said. “I’m all about getting out there, putting my face out there, making people laugh.”

In a world full of YouTubers, Vine stars, and Instagram comedians, Lady B said nothing beats the feeling of being onstage with a spotlight, armed with microphone and fresh jokes.

“Being onstage and doing videos are not the same,” she explained. “You can be so funny online then totally disappoint on stage. I think that sets people apart. There a lot of internet sensations, but they don’t take it past that.”

Ultimately, Lady B wants to make people have a good time. According to her, life is already hard enough.

“Laughter is healing, especially if you get a good laugh that comes all the way from your gut,” she said. “You can feel it. You can feel it going to all the areas where it’s needed in your life. That’s why I am here.”