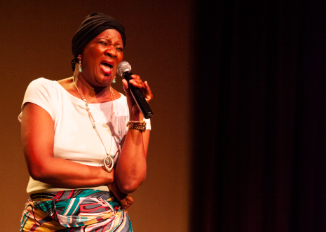 Carla “The Truth” Youngblood stared breast cancer in the face and laughed. After a short battle with the disease, the Alabama comedienne chose to take life by the mic and share her story one stage at a time.

After making her comedic debut in 2012, The Truth has taken her talents across the country. But she’ll always have a soft spot for her home state, which has been good to her, especially when it comes to her brand of Southern-style humor.

The Truth takes the observational approach to her stand-up, often meticulously drawing material from real-life situations, finding the funny wherever she goes—everything from weird encounters on the New York City subway to getting out of traffic tickets to shopping for prosthetic breasts. Nothing is off limits.

“I try to not let a day go by without writing a joke,” The Truth said in phone interview. “I use my iPad. Of course, if I’m not at home, I’ll use a piece of paper or put it in my phone.”

Born and raised in North Alabama and being the youngest of five, The Truth used her tell-it-like-it-is personality and comedic wit to combat her older siblings—earning her moniker. Even with the innate ability to make others laugh, it took a bout with death to really awaken her true potential as a performer.

For The Truth, it seems like just yesterday that she was about to clock into work and then received the call about her breast-cancer diagnosis. That was in October—Breast Cancer Awareness Month—2015.

For years, The Truth jotted down her thoughts about overcoming the disease and finding the strength to persevere. Those notes would ultimately materialize as “Da Truth About Breast Cancer,” a short stand-up tour about her journey, which included 28 rounds of chemotherapy and a double mastectomy. Since then, she obtained her communications degree at the University of Alabama at Birmingham (UAB) and made it a goal to perform at least once a month.

Granted, that’s easier said than done. According to The Truth, the comic scene is “bigger than people think,” especially when everyone is vying for a spot at The StarDome, Hoover’s premier comedy club. That doesn’t stop her, though, because she’ll venture to any open mic night in a 90-mile radius.

Most recently, The Truth collaborated with gal pal and fellow comic Valencia “Mrs. V” Johnson for “Beans and Cornbread,” a DVD taping that packed downtown Birmingham’s WorkPlay. Since becoming cancer-free, The Truth’s outlook on life took a 180, particularly when it comes to branching out, which includes an inevitable move.

With high dreams of landing a national tour and a television special, the Alabama native knows her days in the Magic City are limited. Until then, The Truth enjoys her local gigs, which include a mixture of comedy clubs and corporate events.

“You can live here, but you can’t always perform here,” she said. “You’ve got to spread yourself out into various cities throughout the U.S to become a national comedian.”

Life after surviving breast cancer has made The Truth’s stand-up routine more transparent. After enduring chemotherapy and having both breasts removed, it’s become easier to be more vulnerable on stage.

“I just get on stage, and my life is an open book,” she said. “There’s no secret. It is what is, and I’m just going to make you laugh about it.”

Since embarking on her journey, The Truth said she’s gained something of a fan club cleverly dubbed the “Too Live Crew,” a group of supportive women who have attended 90 percent of her local shows. The group inspires her to always keep things “fresh and relevant” because she feels it would be unfair to give her longtime followers a repetitive performance, she said.

“If they’re paying money to see me, I can’t just give them the same show every time,” The Truth said. “They’ve pushed me to write and create new sets all the time.

She made a leap of faith to pursue her passion full-time, leaving her job as a certified public accountant (CPA) to work as a consultant, which gives her the ability to perform and travel without being tethered to a cubicle. With seven years invested in the comedy game, The Truth said she is still paying her dues and won’t stop putting in the work to become an exceptional performer.