At an age when most little girls were playing with dolls, Kyoka Akers was acquiring skills to make dolls.

Akers has a crochet-doll wall collection currently on display at the Birmingham Museum of Art (BMA). Her exhibit—Crown Jewels—is part of Bart’s ArtVenture, the museum’s interactive gallery designed for families and visitors with children who want to take their time exploring the institution.

Akers’s exhibition, in the museum through the end of the year, shows her crochet dolls with inspirational thought bubbles and a crown on each thought. The “jewels” include sayings like, “Watch Your Thoughts,” “Eat Fruits and Vegetables Daily,” “Meditate Often,” “You’ve Got This,” “You Matter,” and “Practice Gratitude.”

“The thought bubble is representative of jewels you pick up along the way,” said Akers, who began crocheting in fourth grade. “They’re things I’ve heard over the years. I just wanted it to be positive, beyond the typical, ‘You can do it.’ Something like, ‘Watch Your Thoughts,’ no one tells you that as a child. I just want to plant seeds, even if they don’t know what it means. If they can see it and remember it years later, that’s good.”

Embrace Your True Self

During a workshop Akers held for children ages 11 through 15, she had participants write biographies for the black dolls that included names, jobs, hobbies, habits, and anything else.

“The workshop had a mixture of children of all races,” Akers said. “There’s no discrimination in reference to who did the backstories, but, of course, I want our kids to do the backstories, as well.”

Akers, who is from Bessemer, said she wants black girls who visit the museum to see themselves in some way. That’s one reason for her lessons.

“I want to do multiple workshops so [the girls] can embrace their true selves,” she said. “[Black] little girls get kind of embarrassed. They’re not used to their natural hair, they’re not used to seeing representations of themselves. … For the black kids, a majority of them, you had to warm them up to the dolls.”

“Like, asking them, ‘Which one do you like the best?’” Akers said. “And it’s funny because this could actually be a social experiment. A majority of the black kids chose the doll with the blue eyes. They shied away from the darker skinned dolls.”

Akers said she made sure to highlight “every shade of black women.”

“Every hairstyle we do … really represents growth, resilience, and change,” she said. “The butterflies [that hang above the dolls] represent growth and change. As women, when we go through something—whether it’s a breakup, a new relationship, a new job, something bad—we tend to change our hair, whether we cut it, add hair, color it. That gives us that first boost of confidence to show we can go through it.”

The butterflies were colored and designed by students in the workshop. The symbolism, Akers said, is “sometimes you have to go into your cocoon and come out new.”

“One girl saw a doll and said, ‘Ooh, my mama used to wear her hair like this,’” said Akers.

That was important to hear, she said: “I want it to be continuously interactive, to help build confidence.

“I asked the kids to create something I could put it in the exhibit, so whenever they come back they can see their butterfly, their thought bubble.”

After receiving a call from BMA Manager of Youth and Family Programs Willow Scott inviting her to create an exhibition for the space, Akers knew her dolls had found a home.

Every doll Akers makes is different, from skin tone to hairstyle.

“Each one of them created themselves, they were just blank,” she said. “I let the doll speak to me and moved forward from there.

Her dolls are different shades of black with different hairstyles. One doll has vitiligo, another is “a bit heavier.”

“I wanted everyone to be represented,” she said.

Akers began crocheting in fourth grade after watching her mother, who asked, “Do you really want to learn?”

“I said, ‘Yeah,’” Akers remembered. “My mama didn’t know how to read crochet patterns, so I had my grandparents take me to the library and checked out a crochet book. I taught myself how to read patterns, and I’ve been crocheting ever since.”

Among the pieces she’s most proud of are a king-size University of Alabama Crimson Tide blanket and a purple elephant-head rug.

Akers said her biggest art inspiration is her mother.

“When it comes to crafting and different ideas to make things work, she doesn’t have limitations,” Akers said. “If she wants to do something, she does it. She sewed a pair of pants with no pattern. She just decided she wanted make a pair of pants and did it.”

Akers is also the mother of two children: Keylen, 16, and Ryver, 1.

The Crown Jewels exhibit is Akers’s first time partnering with the BMA, but she has since gotten a job as an art camp teacher at the museum.

“I do different things: pattern blocks, funny faces, flip books, rag rugs—each week is a different week and different age,” she said. “I do things that help [students] think a little more. I throw things at them and make them create their own looks. These kids are very talented. Most of those who have come have parents who know their children have a real love for art.”

“I want to do more collaborative pieces with other artists,” she said. “I definitely want to start working more with young kids. I do crochet classes already. I want to do more exhibition pieces in form of raw art, and I’m looking at other museums.” 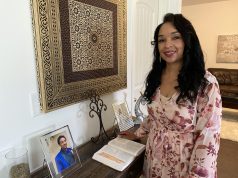