Measles, a virus declared “eliminated” from the United States in 2000, actually saw 349 confirmed cases in 26 states and Washington, D.C. in 2018. That’s the second highest number of cases confirmed by the Centers for Disease Control and Prevention (CDC) since 2000.

On January 29, 2019, public health officials in Washington declared a state-wide emergency as a result of an ongoing measles outbreak. Clark County, Washington, located just north of Portland, Oregon, has seen a sharp rise in the number of reported cases — 35, with an additional 11 suspected cases. The majority of patients in that outbreak are unvaccinated children younger than 10 years old. Officials are also monitoring ongoing outbreaks in New York and New Jersey.

While all this certainly sounds scary, luckily, if you and your loved ones have already been vaccinated against measles, you’re pretty much in the clear. According to the CDC, “the best protection against measles is measles-mumps-rubella (MMR) vaccine.” If you’re an adult born in the U.S. after 1957, it’s likely that you’ve received the necessary doses to achieve immunity against measles.

So, how did we get here? And should you be concerned?

But wasn’t measles eliminated from the U.S., you might ask?

“Elimination” doesn’t actually mean a complete lack of cases. The CDC defines “elimination” as “the absence of endemic measles virus transmission in a defined geographic area, such as a region or country, for 12 months or longer in the presence of a well-performing surveillance system.”

Basically, we have achieved an end to constant, year-round spread of the virus and have a strong system in place for reporting and tracking cases. But that’s in the U.S. There are many areas of the world where measles is still a common disease. Travelers sometimes bring the measles virus back with them.

While there have been cases each year in the U.S. since 2000, generally, we’ve had less than 200 per year. These measles cases occur as a result of a non-immune person catching measles outside of the U.S. and then spreading it to other non-immune people while here. Outbreaks then occur in communities with groups of unvaccinated people.

Measles can spread to others through the air when an infected person coughs. It lingers in the air for some time afterward. It is so infectious that, according to the CDC, “if one person has it, 90 percent of the people close to that person who are not immune will also become infected.”

Like so many diseases, it’s not clear what you have right away. You start with a cough and runny nose and goopy eyes, but so can 100 other cold viruses … It happens before you get the rash. That’s the most infectious time, and you can be infectious for about three weeks. The classic measles rash follows the cold-like symptoms a few days later, spreading from the head to the whole body.

People think of measles as ‘oh, you get a rash, and then you get better,’ but if you get measles, even in the U.S., there is a high risk of death.

Although most people do survive measles, there can be serious long-term effects for survivors, especially in children under 5 years old. Ear infections that cause permanent hearing loss can occur. There is a form of brain swelling that can develop seven to 10 years after infection with measles. In about one in 1,000 cases, the infection becomes systemic and moves to the brain. This causes behavioral changes, potential brain swelling and convulsions. There’s little doctors can do. Children can be left deaf, blind or with mental health needs – if they recover.

And, a 2012 study found that measles may alter your immune system so that it “forgets” how to fight diseases to which you had immunity before infection with measles. Interestingly, the introduction of the measles vaccine saw an increase in childhood immunity to many other diseases in the U.S. population as well. It seems that reducing the number of measles infections also reduced the possibility of immune systems forgetting how to combat other diseases.

“Herd immunity” is a kind of indirect protection against infection. When a large population becomes immune to a disease, the lack of circulating infection provides some protection for individuals in that population who are not immune or can’t receive the vaccine. With measles, however, it’s different. Because measles is so contagious even a single infected person can start a virus spreading through a community where there are unimmunized individuals.

One measles vaccine, and you’ve got 95 percent protection. For children, a second dose of the vaccine is important to both boost the amount of protection you receive and to ensure that the protection is long-lasting.

Any time you talk about a vaccine, you have to talk about the risks. The biggest risks, for any vaccine, are going to be a little bit of low-grade fever, a little soreness at the injection site; maybe for infants, a little fussiness for a day or two. And those are really the biggest risks.

If you’re unsure about your vaccination status, look for your childhood immunization records or check in with your providers. They may recommend another dose of the vaccine or can test you for immunity. Receiving another dose of the vaccine if you’re already immune is not harmful. If you can’t get the vaccine (the CDC has a list of reasons that may prevent you from receiving it), have a conversation with your healthcare provider on the best methods of protecting yourself.

If you believe you have been infected with measles, contact your healthcare provider immediately for evaluation. 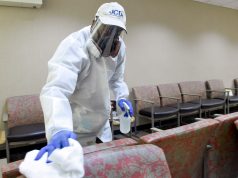