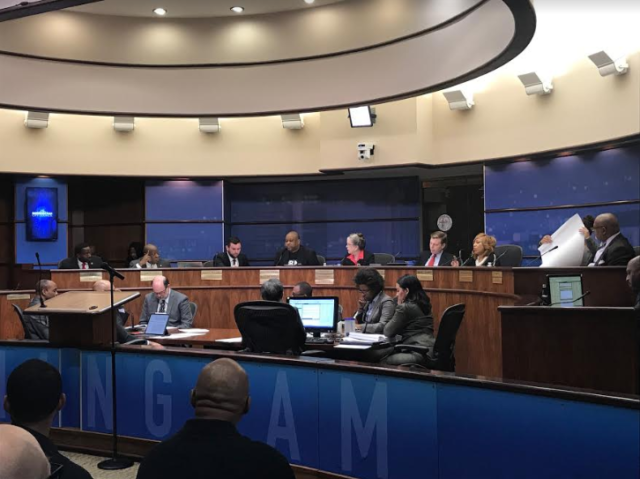 The Birmingham City Council voted 8-1 on Tuesday to approve an agreement with Major League Baseball for a Youth Academy at George Ward Park.

Council President Valerie Abbott was the lone “no” vote.

The matter has divided the council and was delayed for several weeks because of community opposition.

After a lengthy discussion during Tuesday’s council meeting, it appears the youth academy could come to George Ward Park in Bimingham’s South Side.

“The process moves forward for Major League Baseball to be at George Ward Park and the council was very supportive of it and I appreciate their support,” said Council President Pro Tempore William Parker, chair of the Parks and Recreation Committee.

MLB must now decide whether to open at George Ward Park or another location in Birmingham. City officials believe George Ward is still the best option.

“ . . . we’re moving forward to making sure we bring MLB here to George Ward Park,” said Parker. “I’m confident and hopeful that as we move forward and get all the agreements signed and executed that we can move forward with the academy at the park.”

Councilor Steven Hoyt said the academy was important for the development of young people.

“We’re talking about the future of our children, we shouldn’t be debating about that at all,” he said. “. . . baseball and this program gives them some balance as it relates to development . . .this program presents an opportunity to give them some self-esteem about themselves.”

Opposition from some community members led to weeks of debate on the council and on social media.

The MLB first proposed having the academy at George Ward but after concern from residents of the Glen Iris neighborhood decided to reassess the academy at that location to consider other sites such as Banks Middle School, Cooper Green Park and East Lake Park.

Abbott said her “no” vote was based on concerns from her constituents in District 3 which is where the academy would be located.

“I do not believe that there is one person on this council who would vote in defiance of their constituent’s wishes,” Abbott said. “I have had two constituents who have contacted me in favor of this and everyone else has been opposed to it . . . I don’t think there is one person opposed to Major League Baseball Youth Academy, the location was the only issue. We have a city that is 150 square miles and there are other places that the youth academy could go if anyone would put any effort into it. I believe that.”

Later in the day, a special called Parks and Recreation committee meeting was held to hear from citizens to speak on the academy.

Kristina Scott, a resident of the Glen Iris neighborhood said she moved from Homewood to Birmingham two and a half  years ago to be a part of a more diverse community.

“I’m a huge baseball fan and I could not be any more excited to see the resources of the MLB Academy . . . come into the city of Birmingham and make those facilities available for the youth of Birmingham,” she said. “For me, that is something that is important is that we’re welcoming of people from all over the city and from all over the community.”

Keith Graham, a member of the New South Softball League that plays at George Ward, said, “at the end of the day we’re arguing over dirt or kids and what’s more important, dirt or children,” he said. “We’re bringing a program that’s going to help get our children where they need to be and get them the structure because some of them don’t have any structure at home and this program will help them get that.”

Steven Foster, president of the Five Points South Neighborhood Association, still had concerns with the lack of communication from city officials.

“I think a lot of the differences that we’ve had, and what it’s come down to, is the lack of transparency and I think what was intended got lost in the weeds . . . with projects like this, if notice is given at least six months . . . I think a lot of this [the opposition] could have been avoided if more transparency or more communication had been put forth.”

Jennifer Powell, who lives on the south side, expressed concern over what happens to green space at the park.

“Part of why I bought my house eight years ago in Birmingham on South side is because of the green areas, the trees … I’m not opposed to people coming in but my question is why choose a park with these beautiful trees and that’s being so well used by so many people already from all over this city instead of choosing somewhere else that doesn’t have the trees or is not already being used and that you don’t have to tear down to build up, why not just choose another area?” she said Powell.

Parker acknowledged the matter could have been better handled.

“Communication, miscommunication, there were some mistakes,” he said. “Moving forward, we’re going to take corrective action to make sure those mistakes don’t ever happen again. . . this is the first in a series of meetings I want to talk about and we’re going to have with the community, I think we need to have them ongoing because I think it’s important that we make sure we’re all on the same page and build that trust but it has to be a two-way street. There’s a lot of mistrust from both parties in this but we’ve got to work together and the communication has to be better.”

The Parks and Rec Committee will meet again on April 16 at 5:30 p.m. at City Hall to update residents and hear again from the public on the park.