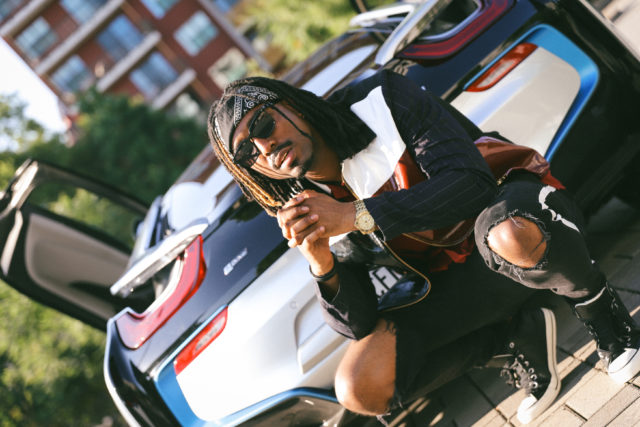 In 2004, he emerged on the music scene as a rapper on local indie label Amabala (Alabama spelled backward) Records. Eventually, he realized he could get more opportunities with the label as a singer and later as an engineer.

“I always knew I could hold a note, so I started singing hooks for different artists,” Cook said. “When I first got started, I was definitely rapping. … That’s my background, and it helped me understand music and recording. I was a part of an indie label at the time, and we had a lot of acts that were similar. I wanted to stand out, so I started doing hooks and writing full songs. Once I grew in it, I felt a lot more confident in my voice and songwriting. … I remember it feeling so liberating.”

Cook has had success in the mainstream arena recently, earning producer credits and track placement on comedian-turned-singer Lil Duval’s follow-up single “Pull Up,” which features hip-hop artists Ty Dolla $ign and 2Chainz on the record’s remix.

“I produced the record and mixed it,” Cook said. “My production partner, RL of the R&B group Next, and I put that record together for Lil Duval. [RL] wrote the song.”

Cook also produced RL’s recent single, “You Are,” and has more producer credits to come on RL’s upcoming album. In 2018, he produced the isolated single “Want It” for the group Next. Earlier this month, Cook debuted his first extended play (EP) record, “Yes Ma’am,” which is available on several streaming platforms: Tidal, Google Play, Spotify, and Apple Music.

Cook, 32, is a self-taught musician who “plays the keys by ear.”

“[I also] play a little guitar and recently picked up the harmonica,” he said.

His tenacity went full force after his first producer credit and track placement in 2011 on the song “G.O.D.,” by gospel recording artist Canton Jones.

“The record did pretty well, and it showed me that I can do this and can get major placement in the industry,” said Cook. “It was encouraging.”

Rap influences his music from a “musician’s standpoint when it comes to producing records,” he said.

“Nowadays, [with] R&B, there’s always an infusion of rap, in my opinion, because you want to have something that’s appealing to both [genres]. So, whenever I’m producing something, I consider the cadence. People sing a little faster now, and it can go for rap. … If [a performer is] singing, they might be using auto-tune. … [Rap and R&B] go hand in hand. That’s kind of the wave now.”

Cook, who started singing in 2014 and released his first single “Superhero” in January 2016, self-describes his music genre as “R&B.”

“It’s rhythm and blues, but there are a lot of hip-hop undertones,” he said. “It’s R&B, but it still has the 808’s, [the common nickname for the Roland TR-808 Rhythm Composer, an electronic drum machine that’s popular in hip-hop music], so it can still knock.”

When it comes to making music for other artists, Cook goes the extra mile.

“I don’t give them the bare minimum. I give them the absolute best,” he said. “I’ll mix [a piece] 100 times to give them all I got. From my experience, [artists] really gravitate toward that and can appreciate it.”

Cook is very intentional with the material he creates.

“With a lot of the material I write, I try to bring it from actual life experiences,” he said. “Whenever I have a song topic, I draw from something that has actually happened in my life or between myself and another person when I’m writing about relationships on a record.”

That’s true about “Yes Ma’am,” the EP he released on June 14: “It’s about a relationship from the beginning to the end.”

“I’m really proud of myself for having a solid theme,” Cook said. “I was real intentional about that, and it came together well.”

“I came up in an era when we didn’t feel like there was much of an outlet,” he said. “We had a rich scene among ourselves, [under] the umbrella, but we didn’t know how to get the music out.”

The goal now is to change that.

“I don’t want anyone to feel like [they] have this amazing body of work or this gift God has given [them], but they don’t know how to get anybody to see it or hear it,” Cook said. “So, we [independent artists] are on a constant journey of trying to figure out how to fill the gap.

“A lot has changed with social media, of course, so now it’s taken a turn. But my greatest hope is to alleviate the impossibility, so nobody will have that sentiment.” Cook said.