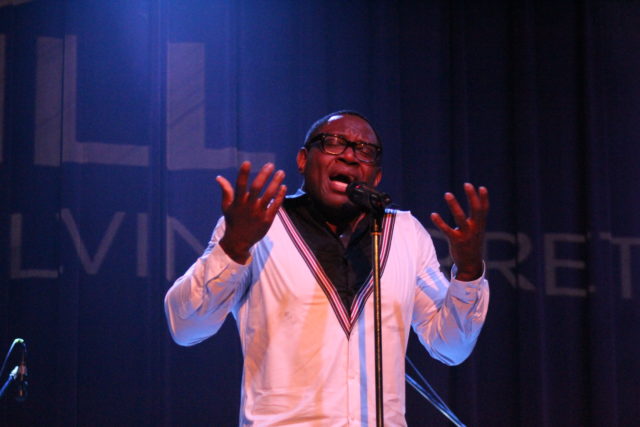 While the Grammy-nominated songwriter still wants to make you groove to the bass line of a song, he also wants you to hear the message of positivity and hope on his latest album “This HILL.”

“My craft is inspiration,” 41-year-old Garrett said on a recent Friday night in June before taking the stage for his album-release party. “I call my music inspirational soul.”

The title song and lead-off single, “This HILL,” pays tribute to the lessons he was taught growing up, which helped shape his relentless spirit and pursuit of his goals. It pays homage to the message he received from his father on not just hoping to achieve something but working hard to get the things he wanted in life.

“Because of hope, I have the inspiration to pursue what I love at the risk of loss,” said Garrett, a founding member of Birmingham R&B group Just a Few Cats.

As he sat in the dressing area before his performance at WorkPlay—retracing his steps from the time he was gifted a bass guitar on his 11th birthday from his father to his rise as an in-demand music manager and artist—Garrett was upbeat and relaxed and even threatened to take a nap before showtime. That nap never happened.

In the early part of his music career as a bass player for the popular music group (often referred to by the moniker “Cats”) and the owner of a music-management company, relaxing before a performance was nearly impossible for Garrett.

Garrett now has a team that includes musical director John Jackson, a publicist, and a host of musicians.

“There is only so much you can do with two hands,” he said. “You can’t be your own manager, your own musical director, and your own publicist.”

The husband and father of two talks about trusting other people to contribute to the process. He uses words like “connection” and “vulnerability” when he talks about his approach to working with a team. The change has come from age and a desire to grow, to connect with people, and to inspire, he said.

From Boss to Artist

Tuscaloosa native Garrett arrived in Birmingham in 1996 as a college football player at Samford University. Though he grew up playing his bass at his father’s church, he had not really planned on being a professional musician; he was more interested in business, so he earned a degree in business management. Bass playing and performing were his side gigs.

Around 2000, Garrett and his longtime friend Ruben Studdard formed a band to compete in a jazz competition. While performing with the band on the side, Garrett worked a day job and ran his own business: Music Caterers, a management company and booking service.

In 2003, when Studdard was the season-two winner of the television singing competition show “American Idol,” Garrett’s career also took off as he hit the road with his bandmate. Those years were invaluable for Garrett, who learned the music business as Studdard’s musical director firsthand, working with seasoned producers, writers, and other music professionals.

Eventually, he had the opportunity to write and produce for other artists, including R&B singers Joe, season-three “American Idol” winner Fantasia, and former Destiny’s Child member Kelly Rowland. He also became an accomplished gospel writer and producer, working with Trin-I-Tee 5:7 and Deitrick Haddon, efforts that earned him Dove- and Grammy-award nominations. Instead of moving away to a city with a larger music industry, Garrett knew he would return home.

“I could have gone somewhere and gotten music jobs, but I wanted to bring [that knowledge] back to Birmingham,” he said. “I was fascinated by the possibilities of what Birmingham’s [music industry] could be. I just love this city. It’s not too fast and not too slow, and it’s where my family is.”

Garrett returned to Birmingham not only with knowledge he wanted to share but also with the belief that things had to be done his way for things to turn out right. That mindset—one of being able to depend only on himself to get things done—had the opposite effect on people. It made making the art seem more like a job, he said.

Again, Garrett thinks back to the times he was running around trying to do everything instead of giving people the freedom to do their own jobs. By 2012, he was ready to step into his own spotlight as a solo artist and released his first solo album “Expose Yourself”; other singles followed, including the 2015 song “By Myself” with Studdard.

Over time, Garrett began to want something different for himself and others: “I wanted to be better. I wanted to grow,” he said.

So, he started approaching those who worked for him and asking questions: “What do you want out of life?” “How can I be better?”

“Being the boss was tough. Eventually, I didn’t just want to be the boss anymore,” said Garrett, who took steps to become the inspirational artist he hoped to be when he started recording “This HILL.”

“I wanted to create a working environment in which my goal was not to make you play a certain note but instead to inspire you to play that note with some feeling and excitement,” he said.

Even before he wrote “This HILL,” Garrett had started looking for specific ways to take that positive outlook and use it for good—and that gave birth to the Write Life songwriting class.

“I was invited by the Red Mountain Writing Group about three or four years ago to teach a songwriting class,” he said. “When I went into the class and started talking, I discovered I had a knack for teaching.”

After that experience, Garrett knew he wanted to do more teaching, so he started fine-tuning a curriculum for his songwriting class.

“I wanted a way to teach the songwriting process by using critical-thinking skills,” he said.

Last year, Garrett took Write Life to the Dannon Project—a local organization that provides reentry and crime-prevention services to ex-offenders by collaborating with local corrections institutions and faith- and community-based groups—where he offered the classes twice a week for about six months. He worked closely with about eight students, helping them channel their thoughts and feelings into lyrics and music.

“We recorded about five or six songs, but it wasn’t just making music, though,” he said. “We talked about other aspects of the business and also life lessons. It became a mentoring program.”

“I want to teach the power of positivity through music,” he said.