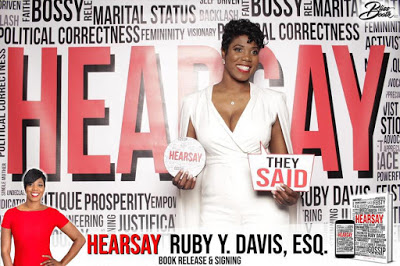 Since becoming a teenage mother, Birmingham’s Ruby Y. Davis has defied the odds and refused to let hearsay—what others said about her—stop her from pursuing her dreams.

Davis, founder of The Davis Law Group in Birmingham and author of the new book Hearsay, will kick off the Birmingham Public Library’s 2019 Local Author Lectures series by sharing her story on Saturday, June 8, 10 a.m. to noon, at the Five Points West Regional Branch Library

Davis said she chose the title of her book as Hearsay for a reason, not only because lawyers deal with hearsay all the time in the courtroom, but also due to the fact it defines what she faced in life as a teenage mother. “Hearsay is defined as a rumors, a bunch of gossip,” Davis said. “It’s my life story. Being a young parent, I had to overcome many obstacles. I used my naysayers as motivation.”

While raising a daughter, Davis made a name for herself as a hard worker and gained a job at an employer that paid her entire cost of college and law school. She worked her way up to become an attorney, spending 15 years working at an Alabama insurance company. As she worked her way up the ladder, Davis balanced life and motherhood, then stepped out on faith to form the Davis Law Group in 2013.

Since Davis’ book Hearsay was published by Atlanta publisher Danielle La Von of Dee Moon Publishing in March, she has spoken to groups across Alabama, sharing her message of hope. Davis, whose daughter is now 21, hopes her story inspires other women to refuse to give in to obstacles. Davis hosts a book club, and though her audience started out mostly as women, her message has also resonated with men.

She hopes attendees of her Local Author Lecture on June 8 at Five Point West Library will be motivated to use hearsay as inspiration to prove doubters wrong.

FOR MORE INFORMATION ABOUT BPL
For additional information about the programs and services of the Birmingham Public Library, visit www.bplonline.org . The mission of Birmingham Public Library is to provide the highest quality library experience for life-long learning, cultural enrichment, and enjoyment. This system—with 19 locations and serving the community for over 130 years—is one of the largest library systems in the Southeast.