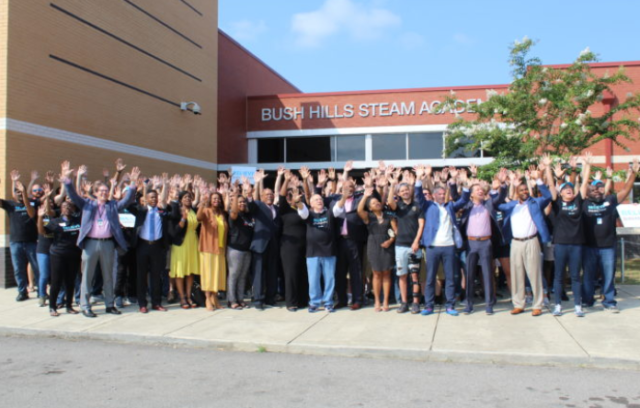 Administrators and teachers at Bush Hills STEAM Academy in west Birmingham got a boost preparing for the first day of school on Aug. 8 when about 150 AT&T employees signed up to come out and help kick off the school year.

The STEAM (Science, Technology, Engineering, Arts and Mathematics) Academy’s halls were filled last Friday with AT&T employees who volunteered to help teacher and faculty move into classrooms and prepare to welcome students on the first day of school.

“AT&T believes in Birmingham and today we officially kickoff ‘Believe Birmingham’, an initiative that taps into the spirit of service and community . . . we had almost 150 AT&T employees sign up to come out here,” said Wayne Hutchens, AT&T state president. “. . . as we talked to our employees…and we asked them what would you like to do within the community…they overwhelmingly said education and youth. So that speaks volumes.”

Ashley Samuel, Bush Hills principal, said she was excited that her school would be a “first”and welcomed the support from AT&T.

“We will open as the first STEAM Academy in Birmingham City Schools,” Samuel said. “We are so excited for you to be here and to assist us with that effort. So, thank you from the bottom of my heart.”

“And when you believe Birmingham what you’re saying to us also is you believe in our scholars,” she said. “You believe in them as much as we do and your work today, your time, and talent and effort today will feed directly into that. So know this, you’re not only helping our teachers and staff here at Bush Hills STEAM Academy, you’re making an impact for the first day of school. We will have scholars walk into this building knowing that there are people in our community who believe in our children.”

Smitherman said he lived in the era where everyone pulled together to make the state, the city and the country what it is.

“You all are here providing yourself and your services to do the same thing, that’s because you care,” he said. “This is a representative of Birmingham, Alabama and this country…all of us together is the representative because we care and we care about each other.”

“In my opinion they [teachers] should be the highest paid in society because they get the chance to invest in them in ways we could not even imagine,” he said. “So I’m always grateful…I think it speaks to your [AT&T] corporate intention. You have the intent to do something good for young folks, and…this morning certainly speaks to that.”

He said the city and region should also invest in young people “because they’re going to be the productive citizens of this world and I think it’s important for us to have intellectual and cultural exchanges that present us with a good product in terms of our young people and what they want to be.”

Erica Williams, Director of Educational Advancement for the city of Birmingham said all of the helping hands are welcomed “…you have no idea how much this means,” she told all of the volunteers. “ You may feel as though you’re coming to help in a small way, but it means [a lot] to the educators and to the little people in this school.”