One thing Miles College President George T. French Jr., PhD, has learned since announcing his resignation from Miles and new position at Clark Atlanta University (CAU): the alumni at his next stop have a strong presence in the Birmingham metro area.

French will assume the role of president at CAU, which has a student body of 3,485, on September 1. He has served as president of Miles, which has about 1,700 students, since March 2006.

Recently, the CAU Alumni Association Birmingham/Central Alabama Chapter held a dinner party for French at the downtown residence of Elias and Gaynell Hendricks; Elias and the couple’s daughter, Daagye, are CAU alums.

“This is somebody who means so much to our city and so much to us personally, as we’ve seen Miles grow. To have him go to my school [causes] a flutter in my heart,” said Elias, a graduate of the CAU class of 1969.

He told French, “Your Birmingham family appreciates you for what you’ve done in the past and certainly even more for what we know you will do for [CAU] in the future.”

The dinner party for French attracted CAU alums from the Montgomery, Ala., and Atlanta, Ga. areas and the group’s National Alumni President Devin White.

“When we first started the process of finding a new president, some people were worried [that we would not be able to] fill that need in such a short time period, but as a [CAU] slogan says, ‘I’ll Find a Way or Make One,’” said White. “We are so elated to have Dr. French as our incoming president, … and we look forward to the upcoming receptions and greetings for him and introducing him to the institution.”

Calvin Briggs Sr., EdD—CAU class of 1994 and executive director of the Southern Center for Broadening Participation in Science, Technology, Engineering, and Math (STEM)—said French is transitioning from one exceptional college to an exceptional university.

“We have a beautiful relationship with Birmingham and Atlanta, and we hope to continue that,” Briggs said to French. “We’re going to do everything in our power to support you, uphold you. We know you’re a dynamic individual. We know you’re exceptional and a servant leader. You were at Miles College for 14 years, which means you’re probably going to be at [CAU] for 20. … We have faith in God, and we have faith in you and that you are going to do the right thing and elevate [CAU] to its highest heights.”

Kenya Johnson-Coleman, who graduated from CAU with a bachelor’s degree in 1996 and a master’s in 1998, came from Montgomery for the occasion.

“[CAU] is home for so many of us, and we are excited to have you and see what you do with CAU in the future,” she said to French. “I was so excited when I heard you would be the next president at [CAU] because I’m familiar with what you’ve done for Miles and that community. I know you will do exceptionally well at [CAU], and I just can’t wait to see what you have in store for our beloved university.”

Arlillian Bushelon, a 2005 CAU graduate, said French will fit in nicely with the school’s slogan.

“When I first went to [CAU], I found the slogan ‘I’ll Find a Way or Make One,’ and I was like, ‘Really?’ But as you matriculate, you learn the true meaning of [the slogan],” she said to French. “You will definitely figure that out once you get to CAU. I wish you the best.”

Also attending the CAU alum dinner party were several Miles alumni, who said they are sad to see French go but excited for CAU. Former Birmingham Mayor Richard Arrington and Miles College alum said CAU is getting “a proven leader.”

“I have mixed emotions [about French leaving],” he said to the group. “I think Birmingham and Miles College are losing a proven leader, but I hope and know [you] will hold up his arms and support him.

“[French] has done wonderful things at Miles College. Remember what leadership is about. … It takes a special person to really be a leader, and George French is really a leader. He has transformed Miles College. … Anybody can steer a ship, but to lead it in the right direction and do things, that takes a leader—and that’s what you all got in George French. You’re going to be proud that you have him as president.”

Gwen Amamoo, a Miles graduate and a member of the school’s board of trustees, said French was going someplace where he will be appreciated: CAU is a place where he’ll be “supported and loved. … When he gets there, lift him up and give him the support he needs. Most of all, pray for him and anybody else who is going with him.”

From One Home to the Next

French ended his tenure at Miles on August 16. The school has been his home for more than 23 years, the last 14 as president, and he recalled some of his fond memories of Birmingham and Miles.

“My youngest daughter is getting ready to graduate from Spelman [College],” he said. “When I took her there as a freshman, they asked her previous address, and she said, ‘Dad, you realize I don’t have a previous address other than Miles College? I was born on the campus of Miles.’ My time here in Birmingham has been so fruitful. … My oldest daughter was part of my first graduating class of Miles College, and I was able to give her her degree. She went to medical school and graduated from medical school. Two weeks later, she got married, and I’m her pastor, so I got to marry her. I’ve had some engaging experiences with my children through the [historically black colleges and universities (HBCUs)] experience.”

French knew it was time to leave when he found himself “too comfortable.”

“There comes a time in life when … you’re too comfortable, you’re not really in the struggle and making a big difference,” he said to alumni at the dinner party. “I’ve done everything I wanted to do for Miles and everything they’ve asked me to do, and now I’m comfortable. … I’m not about to sit in a rocking chair, sit on that beautiful campus and just live out life. No. I’m ready for this challenge. … When I get to Atlanta, people [may] call you and say, ‘French is walking in there like he runs it.’ Yes, I am because I will be your president of CAU.”

To read what Miles College students had to say about French, click here. 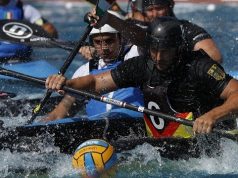