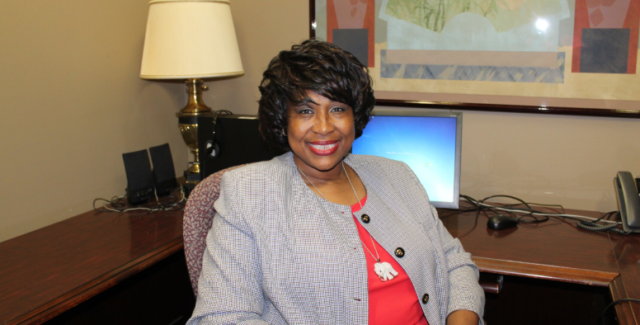 As national president of the American Business Women’s Association (ABWA), Birmingham’s Felicia Johnson helps women grow through leadership, education, networking support, and national recognition. Johnson was elected last fall, and said her journey to the presidency has a lot to do with her service in the Magic City.

“For me to be able to win, it’s phenomenal,” said Johnson, who joined the ABWA in 2003. “It’s awesome to know that people have that much confidence in me to [elect me] to lead this association.

“I’ve served in every leadership role on the local level. … When you do that, you get to interact with people, and people watch you over the years. When you look at where I came from and [see that] our chapter is not a large chapter, it’s special to get the [national vote].”

Johnson has served as president of the ABWA’s Birmingham chapter three times, beginning in 2006, and she was recently voted president for a fourth time this year.

“I’ve been in the association for more than 16 years, so over the course of that time people have watched me grow … [and] watched me at different events,” she said. “I think a lot of it has to do with personality, leadership skills, how well you get along with others.”

In addition to working on the local level, Johnson was instrumental in forming the ABWA’s Alabama Council in 2014, which is made up of chapters from Montgomery, Huntsville, Birmingham, and Anniston. She served as committee chair of the statewide council for 2014 and 2016, attending regional and national meetings to become more involved. Eventually, women on the national board asked if Johnson would consider a leadership position.

“After interacting with different people, I thought, ‘Well, maybe I can do something,’” she said. “So, I decided I would try.”

Johnson was elected ABWA president during the group’s 69th National Women’s Leadership Conference in Augusta, Ga., in October 2018. She also serves as the trustee for a foundation through which the association provides scholarships for women.

As national president of the Kansas City-based ABWA, Johnson oversees a nine-member executive board and six districts, each of which is represented by a vice president: “All of us together govern … all of the women across the U.S.,” she said.

Johnson, 58, was born and raised on the east side of Birmingham, where W.C. Patton Park is now located. She graduated from Carol W. Hayes High School in 1979. She attended Tennessee State University (TSU) in Nashville, where she was a biology major with a minor in chemistry; she graduated in 1983. During her time in college, she played baritone saxophone in the jazz and concert bands, in addition to playing tenor sax in the marching band—where she made history as TSU’s first female drum major in 1981.

“I love music: I sing, and I play. Music is a very important part of my life,” said Johnson, who is a lead singer and an alto with the W.J. Nickols Gospel Ensemble, a community choir in Birmingham that she’s been with for about 15 years, as well as with the Bernard Bowden Voices of Faith, a group she’s been part of for the past four years.

She also plays piano at her church, Mt. Sinai Baptist Church on 14th Avenue North in Birmingham, where her husband of eight years, James Johnson, is the pastor.

“If you’re ever around me for long, I’ll be singing,” she said. “I’ve always got a song in my head. … Music is ingrained in me.”

Johnson’s siblings, two sisters and one brother, are musically inclined, as well. Her brother, John G. Carter, is the leader of and a singer with the Bernard Bowden Voices of Faith and also plays trombone, which he’s played since high school. Her older sister plays “any woodwind or reed instrument, such as the bassoon, oboe, and clarinet,” but she doesn’t sing. Her youngest sister, who sings and plays the piano and clarinet, sometimes serves as a backup musician at her church in Chicago.

“Music has been in our household throughout my life,” Johnson said. “All my life, when I sing, especially when I do gospel, it’s freeing and allows me to let the spirit of God that’s in me hopefully minister to other people.”

Her love of music goes beyond family and church, too. Johnson, who has been a business manager for AT&T Corp. since 1985, is also part of the Connie Carson AT&T Pioneer Singers, which is part of the AT&T Pioneers volunteer network. The group performs at company events, Christmas celebrations, and veteran’s parades, in addition to visiting and performing at nursing homes.

Johnson is also an avid reader. No matter what it the subject matter, “I love to read,” she said, adding that she is currently reading the ABWA’s two publications: Women in Business magazine and the Achieve newsletter.

She and her younger sister share their book lists, which they did recently, so Johnson is in the process of choosing something from her sister’s list. The last book Johnson read was Michelle Obama’s “Becoming.”

“I love that book. … It was a good read,” she said, adding that she recently finished “An American Marriage,” as a light read.

Johnson loves reading so much that she also works with Better Basics, a program that provides literacy intervention and enrichment activities for students in area schools. She reads to second graders through the “Ready to Read” initiative “… just [to] give students a love for reading,” she said. “I tell them, ‘You can go anywhere in your mind when you read.’”

In all areas of her life—whether through her work with the AWBA or her love of music and reading—Johnson has a passion for service. She is a board member with the James Lewis Tennis Scholarship Foundation, which gives “children from the inner city a love for tennis” and has an educational component. She has been with the foundation for nine years and currently serves as its vice president.

Johnson has been a mentor with the Dannon Project, a mentorship program and nonprofit organization that helps unemployed or underemployed at-risk youth and nonviolent offenders reentering society, for six years. She has served as scholarship brunch chair for the TSU Alumni Association for the last two years. She is president of the South Cahaba Council of the AT&T Pioneers volunteer network that works in the community. She’s a professional clown, too.

Johnson is known as FeFe Felicity the clown, and she appears at the children’s parade during Mardi Gras in Mobile, visits nursing homes, and participates in Veteran’s Day parades. She has been a clown for 10 years and is part of a clown alley, a term used to describe a group of clowns. She is a member of the Magic City Town Clowns, as well as an AT&T Pioneer clown.

“A lot of my volunteer work is done in association with AT&T Pioneers, but … I am owner of the name and business [of] FeFe Felicity, so I can do paid events [and] volunteer,” Johnson said, adding that FeFe is for anyone that wants to have a good time, not just children.

Speaking of children, they are a big part of Johnson’s life. She and her husband have a total of 11 children from previous marriages, 17 grandchildren, and four great-grandchildren.

“We’re a blended family,” she said. “We take [the grandchildren] as they come. … We still have five children that haven’t had any children, so there’s potential to grow.”

Johnson said service “gives her a fulfillment that she is able to give back.”

“I feel like I’m helping people, especially around education,” she said. “I think education is the only thing that will allow you to move forward. Once you get it in [your mind], nobody can take it from you.

“Being able to give back and help other people see the importance of education helps [them] grow. I think we ought to be able to bring somebody up … and send them on to go farther than [we’ve gone].”