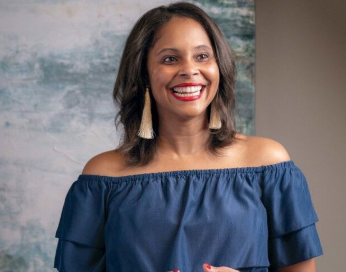 Melanie Bridgeforth’s entire career has been about building equity—something she continues to do as president and CEO of The Women’s Fund of Greater Birmingham.

“I am fighting every day for equitable assistance that treats people [fairly] based on where they are in life and in their circumstances,” Bridgeforth said. “I’ve been doing [that] my entire career, first for children and now for women. I could do it for any population, any issue. I really don’t consider myself an issue-specific person as much as I do a change agent.”

Since being appointed to lead The Women’s Fund in March 2018, Bridgeforth and her team have been able to invest in opportunities that dismantle barriers and connect women to things that create economic success and opportunity.

“For me, it’s the best of both worlds. I call it the great trifecta for change: combining research, advocacy, and philanthropy under one roof, in my opinion, is a terrific opportunity to make sustainable change in the state,” she said of the organization, which is dedicated to “[building] a world where all women thrive,” according to its website.

Bridgeforth added that her work is fulfilling because it allows her to make the world a better place than it was when she found it.

“It’s a way to give back, make a change—change that is beyond me, beyond the people I know,” she said. “More than anything it’s fulfilling to know that [both] I … and the organizations I serve have the ability to impact the lives of people who don’t even know us and who will never know us. … That’s perfectly fine with me … [because] the end goal is affecting the lives of other people in a positive way.”

Bridgeforth, who grew up in Athens, Ala., has always been in the fight for children and families. Before joining The Women’s Fund, she served as executive director of VOICES for Alabama’s Children, a position she had held since 2013.

“My time at VOICES was specifically focused on child advocacy,” she said. “We accomplished everything from addressing food access to increasing licensing of more child care centers.”

At VOICES, an organization that strives to ensure the well-being of Alabama’s children through research, public awareness, and advocacy, Bridgeforth worked for Linda Tilly, who had served as the organization’s executive director for 19 years.

“[She] ultimately became an important mentor for me,” said Bridgeforth, recalling a moment when she was urged by Tilly to do an interview.

“I prepped and prepped, and I did it,” Bridgeforth said. “I was actually quite impressed, like, ‘I can do this!’ [Tilly] said, ‘I wouldn’t have pushed you off the cliff if I didn’t think you could fly.’ I’ll never forget that because in my role as both an advocate and a leader, I really want to be like her.

“I want to cultivate talent. … I want to help people find their passion. My advocacy is not just external, it’s also internal to the people in my circle, in my organization, in different organizations I’m in. I just want to be able to play any small role in helping people find and maximize their talent.”

A fifth-generation Alabamian, Bridgeforth holds two degrees from the University of Alabama (UA): a Master of Social Work and a Bachelor of Arts in psychology. After working in the psychology field, she realized that some issues her clients faced had nothing to do with mental health but with their environment.

“I became very interested in how to address issues on a macrolevel, not just on a microlevel, which is important,” she said. “I was really consumed with [figuring out] the systems that were creating the obstacles for my clients.”

As a result, she attended graduate school at UA to study social work with an emphasis on public policy and administration. One of her professors, Karen Starks, PhD, asked Bridgeforth to detail her postgraduate journey. Bridgeforth said she wanted to change the world, and Starks responded, “Then you must change policy.” That has stuck with Bridgeforth.

“[Starks] really sort of spoon fed me what ultimately became my passion for policy change,” said Bridgeforth. “She was an incredible force in my career and has been ever since.”

After completing graduate school, Bridgeforth got an internship with the U.S. Department of Health and Human Services in Washington, D.C.

“It was a terrific work experience. … I [was exposed to] issues that, quite frankly, I had not heard about or learned about while I lived in the state of Alabama,” she said. “I think the exposure was an opportunity in and of itself, and the work was deeply fulfilling.”

Wanting to change the world was the emphasis for her formal decision to go into governmental affairs as a career, “but … my desire to help other people—and my definition of changing the world means serving others—has really been with me since I was born.”

Bridgeforth was born in Athens, Ala., which is in Limestone County, where her family still owns Bridgeforth Farms. She still visits, though not as frequently as she did when growing up. Her family has documented historical context of who “we are as people, which is rare for people of color in this country,” Bridgeforth said.

“Because we owned land prior to Reconstruction, our family believed in entrepreneurship and all the things that make us who we are today. We actually own and operate, … I believe, more than 10,000 acres of land. We’re farmers.”

Though she doesn’t love being outdoors as much as her father does, Bridgeforth said, “it really is something special to have such a strong legacy in our community and in our state. [I feel fortunate] to be a small part of that. … A lot of our history as a family certainly is not lost on me in that it shaped who I am, and it also shaped the … opportunities I had.”

Bridgeforth has two brothers, and she believes the men in her life were feminists in their own right. Her father, for instance, always wanted her to “shoot for the stars” and told her there was nothing she couldn’t do.

“Quite naturally, I still feel that way today: that I am, in some way, able to do things that maybe I can’t actually do,” she said. “But [my father] really wanted us to believe in our ability and our strength internally, especially me as a … young black girl. [He wanted me] to know how truly invaluable, how truly loved, and how truly talented he certainly thought I was. It was important for him to make sure I knew that.”

That belief equipped Bridgeforth to fight for one of her passions—equity—and think about how race and gender play a role “from the systems around us to what people see or don’t see in us. I think it helped me frame how I approach my work from a strength perspective,” she said.

Another guiding force in Bridgeforth’s life is her mother, who instilled valuable lessons and always defined success as showing kindness to people.

“It wasn’t money, a certain job, or a certain status,” Bridgeforth said. “My greatest accomplishment is my attempt to be kind and heartfelt in the day-to-day choices I make.”

Bridgeforth is grateful for the nurturing support she received from her parents and others.

“My parents are incredible mentors and leaders in my community,” she said. “In my personal life, I’ve always had a compassion for other people and other people’s existence. I think that seed was planted very early in my life and nurtured over time, whether it [was by] folks like [Professor Starks or others]. So many people saw a desire in a young girl who just wanted to help people, so they helped and taught me. … I’m very lucky to have parents that I really emulate. … [Like them], I have a desire to help teach younger generations.”

She added that her upbringing “probably translates most into my deep understanding that we all have innate abilities and talents. People are not broken, systems are broken.”

Bridgeforth now calls Birmingham home, and she’s excited by what she sees in the Magic City.

“From afar, just watching all the exciting things happening in Birmingham—economic development, … real conversations around equity, [ensuring] that residents in the area thrive—everything seems really sincere and heartfelt,” she said. “I wanted to be a part of that, so I moved to Birmingham. … I wanted to be here [and] be part of … the resurgence of this epic community.”

While Bridgeforth spends the bulk of her time focusing on others, she also makes time to focus on herself.

She likes to read, and even though she doesn’t have a favorite book she enjoys works by authors Toni Morrison and Dorothy Roberts. “Killing the Black Body” by Roberts “was deeply moving,” she said, adding that she mainly reads nonfiction. “I probably should get into more fiction and take a step back from work. … I’m ever-learning, so I can perfect my craft and actually continue to be good at what I’ve chosen to do for a living.”

“I think my favorite place—and I probably got this from my dad—is the beach. We traveled a lot to South Carolina beaches when I was a young child. Now, I’m a big fan of Florida and Alabama beaches. … I mostly go to Florida beaches”

Another important part of Bridgeforth’s life is her “fur baby, … Winston. He’s a French bulldog, and he is the apple of my eye,” she said.

To learn more about or donate to The Women’s Fund of Greater Birmingham, visit womensfundbirmingham.org or call 205-326-4454.