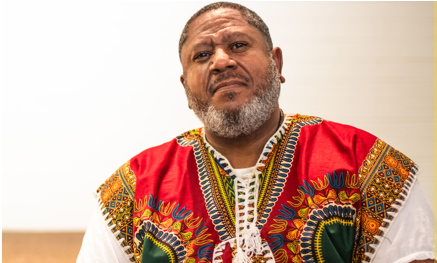 Edmond “Barry” Johnson got his first drum when he was 8 years old—and he has been keeping time ever since.

“It was just a little toy drum I got for Christmas. At that time, I knew I was a ‘Little Drummer Boy,’ which was my favorite Christmas program,” he said. “I had been doing a lot of beating with my hands and on pots and pans. I guess [my mother] was curious to see where I was with it, [so] she bought me that little drum with a pair of sticks. She knew I was a drummer.”

Johnson, 60, is founder, program director, and drum instructor of the Sahi On Ko Djony West African Cultural Enrichment Program, a community-based youth group that exposes its participants to West African drumming, dance, and culture, introducing them to an art form rich in heritage and history.

“Sahi On Ko Djony” is a Fulani term originating from the West African country of Guinea that means “The time is now.”

Johnson said he was born to play African drums.

“If I heard them on the radio or TV, it just mesmerized me and got my attention,” he said. “I always knew I would eventually end up playing.”

Johnson, born and raised in Montgomery, Ala., was one of eight children. He attended the George Washington Carver School there from the first to 12th grade. In middle school, he joined the band and got his first real drum.

“That’s where my journey really began,” he said. “I played the snare drum, and it was the answer to my calling. I marched in the band and went from snare drum to tenor drum to the tri-toms, which is an assembly of three drums.”

Johnson continued playing through high school. When he graduated in 1978, he enlisted in the U.S. Air Force and Air National Guard. Traveling the world with the Air Force enabled him to increase his knowledge about and love of the drum.

“Whenever we would deploy, if it was a place where Africans were there as a result of the diaspora, I would seek them out. If I had the opportunity, I would play drums there,” he said. “I’d dance, too, if I had the chance.”

During his 38 years of service in the Air Force, Johnson was responsible for inspecting life-saving equipment for the air crew and training them in combat, as well as teaching land-survival skills and survival and resistance; he was deployed to England, France, Italy, Turkey, Ecuador, Guam, and Japan, among other locales. While still in the Air Force, in 1984 he moved to Birmingham and joined his first drum group, the Afro-Caribbean Sun Drummers.

“It was God’s plan,” Johnson said. “I was riding past East Lake Park one Sunday, and they were sitting out there playing drums, so I introduced myself. I told them I was a drummer and had a pair of timbales and some wood blocks at home, and they told me to go get them and come back. I did, and the rest is history.”

Johnson played with the Sun Drummers for more than 10 years. During that time, the group formed the Birmingham African Dance Coalition.

“We met some dancers from New York [who were performing here], and they asked us to start studying the ‘Djembe’ drum so we could play to the traditional dances they knew,” he said. “So, we did.”

Since then, Johnson has played for several drum companies, including the Talladega Dance Company; Nathifa’s Dance Company; the Sculpture Essence Dance Company; and the Umdabu South African Drum and Dance Theater. Often, he would play with more than one group at a time.

“The Time Is Now”

“Ms. Bertha Davis, who was with the [Housing Authority of the Birmingham District (HABD)], called me and said she wanted to start a program for at-risk youth to save our youth from gang violence, drugs, teen pregnancy. So, we got together and came up with a plan,” Johnson said. “I bought some drums and … accessories like cowrie shells for the dancers to wear with their garments, and Sahi On Ko Djony was birthed in the Benjamin Green Housing Community in Southwest Birmingham.

“That particular name really meant a lot to us because it was time to fight against all of the perils that were attacking our young people. I had some friends from Guinea that lived here in Birmingham, and I had shared with them the vision of what we wanted to do. I told them I wanted to start it here and now, and one of them said, ‘So, you want to do this now.’ I said, ‘Yes, right now.’ She said, ‘Sahi on ko djony.’ I asked, ‘What?’ She told me [the phrase] means ‘The time is now.’”

The program started in 1999 with about 20 students, but it faded because of Johnson’s frequent deployments. When he retired from the military in 2016, Johnson re-established the program at the Smithfield Community Center, which became a hub where other housing communities could bring young people for drum and dance classes.

This time, about 40 kids joined, but restarting the program came with new challenges.

“You have so many more new and different drugs, [in addition to] social media. That’s the monster we didn’t have back then,” Johnson said. “Kids are a lot more exposed to more stuff now as opposed to back then.”

Currently, about 25 children are a part of the program for youth ages 8 and older, but there have been some exceptions for young adults ages 19 and up.

Sometimes, visitors from African countries will teach: “We’ve had some Africans talk to the kids, teach them traditional songs and dances, and tell them about the culture and the history,” said Johnson, who is also an Artist in Residence for the Black Star Academy Home School Collective.

“For the longest, our people were taught that our history began with slave ships, and we didn’t know anything back beyond that. In order for you to have a vision and a future, you need to know where you come from,” he said. “We teach about the customs and values of Africans, … and we want to share those experiences with not just the youth but the community. … This is something the entire family can enjoy.”

Click one of the links below to read more stories about instructors with Sahi On Ko Djony. 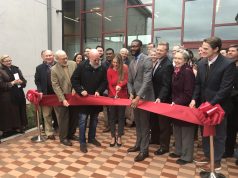 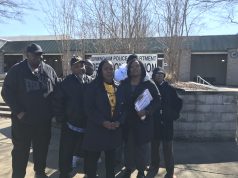