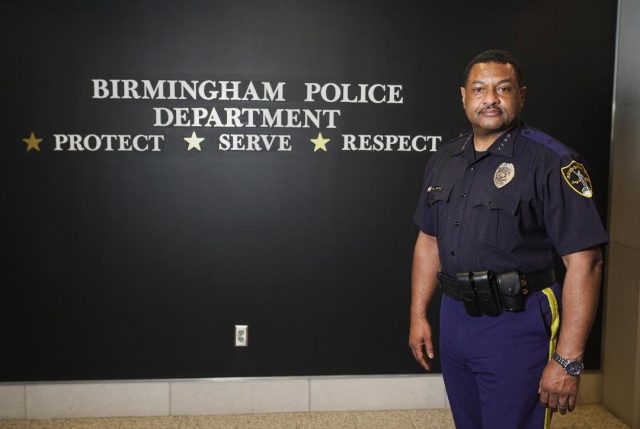 Defunding the police department is a not good idea and could cost lives, said Birmingham Police Department (BPD) Chief Patrick D. Smith in an interview on Tuesday. Instead, police departments need to be “re-funded” to provide improved training that will enable officers to better serve citizens, he said.

“What I mean by [re-funded] is to make sure there is an allocation within the police department … to ensure that police officers are trained in de-escalation, [as well as to recognize] implicit bias [and] deal with people in sensitive matters,” Smith said.

Some activists are calling for the defunding of police departments, so public money earmarked for the police can be redirected to other areas in the community. The idea has gained traction nationally after George Floyd, an African American man, was killed by police in Minneapolis, Minnesota, two weeks ago.

On Tuesday, several speakers asked the Birmingham City Council to redirect funds from the BPD’s $92 million budget to other social services.

“That idea may cause other people to lose their lives as we experiment with this notion of defunding the police department,” Smith said. “[It’s better to] re-fund your police department in critical areas to make sure they are meeting the sensitivity goals and providing the high-quality services that citizens would like to see.”

The civil unrest that started in Minnesota spread to cities across the U.S., including Birmingham, where 24 people were arrested, 14 businesses were burglarized, and 12 businesses sustained significant damage after a night of unrest.

“I understand everything the community is going through. I understand the long-term displeasure of a number of things in society as a whole,” Smith said. “What I personally don’t like is the destruction of our own community, the destruction of businesses. … Many businesses that exist in our society [belong to] small-business owners who’ve had just as much pain and displeasure as many of us.”

Smith said he has heard from protest groups questioning some of the department’s policies. One group, for example, wants a “ban” on chokeholds.

“[The BPD] already has a ban on chokeholds and strangulation,” Smith said. “Officers who use it will receive extensive days off and will be retrained; … this is not something we use in our toolbox.”

Another demand centered around “comprehensive reporting” every time there is a police shooting. That’s also already in place, said Smith, who oversees a department of about 900 officers.

“In fact, every time we have significant use of force, such as an officer-involved shooting, it’s handled outside of the department by the [Alabama Law Enforcement Agency (ALEA)], which turns it over to the district attorney for review. … Major investigations are handled outside [the police department].”

Accountability is all a key component of the department’s standards, Smith said.

“Since I’ve been here (in 2018) as chief there have been a total of 23 officers who have been let go from the department,” he said. “Seven of them resigned under investigation before they were terminated and another 16 were terminated. So that’s accountability for what you do in community and setting the standard for the police department and letting everyone know what the expectation is.”

According to BPD, some of the infractions have included excessive force; unauthorized force; discharge of firearm;  several on unbecoming conduct, substance abuse, theft and ethics violations.

The unrest in Birmingham comes with crime down in nearly all categories, including rape, robbery, and aggravated assaults, according to Smith, who explained that violent crime has decreased 30.4 percent.

“There are a number of things working in our public safety plan for the city of Birmingham, but there is still a lot more to be done,” he said.

The number of homicides this year (43) are nearly even with where the city was last year at this time (45), according to officials.

“Homicides in this city are always a challenge,” Smith said. “A lot of people think a handgun is their first line of defense to de-escalate a circumstance. … That should not be the case.”

Over the past two years, nearly 5,000 handguns have been taken off of Birmingham’s streets—though murder continues to be a problem, said Smith, who was named BPD chief in June 2018.

“We have to come up with various ways to wisely disarm some of the people in the community who should not be in possession of handguns. When I was hired, we were 140 officers below where we should have been, and crime was very high in a number of areas. Over time, we have closed that gap. We have been able to hire up to the numbers that we need, and we have been trying to hire more so we can [further] reduce crime.”

A lot of the positive being done by the BPD is being overshadowed, Smith said.

Currently, many police officers are being seen through prism of Floyd’s death in Minnesota.

“Several officers in our department were very disturbed by what they saw,” Smith said of the video showing Minneapolis police officer Derek Chauvin holding Floyd on the ground by pressing his knee into the man’s neck for 8 minutes and 46 seconds, ignoring Floyd’s dying pleas of “I can’t breathe.” Chauvin has been arrested and charged with second-degree murder in the killing of Floyd; three other officers on the scene where Floyd was killed have also been arrested and charged with various offences.

“I think it’s important for us to recognize that [the incident in Minnesota is not a reflection of] every individual and all of law enforcement,” Smith added. “One incident that occurred in Minnesota [more than a thousand miles away] can simply erase all the hard work we’ve done, all the work we’ve done in the community, every effort we’ve made in the community. … It was like a big eraser came and took it all away—all the good will, all the good efforts, all the good work of the men and women of the BPD.”